Ah … the Salton Sea. It is a place I have visited many times; it is a place I’m sure I will visit yet again (even over the howls of protest from my children).  On a tour I took of the Lower Colorado River region in March of this year, we visited the Salton Sea State Recreation Area. We are here because the sea, which is California’s largest lake, is also drying up. 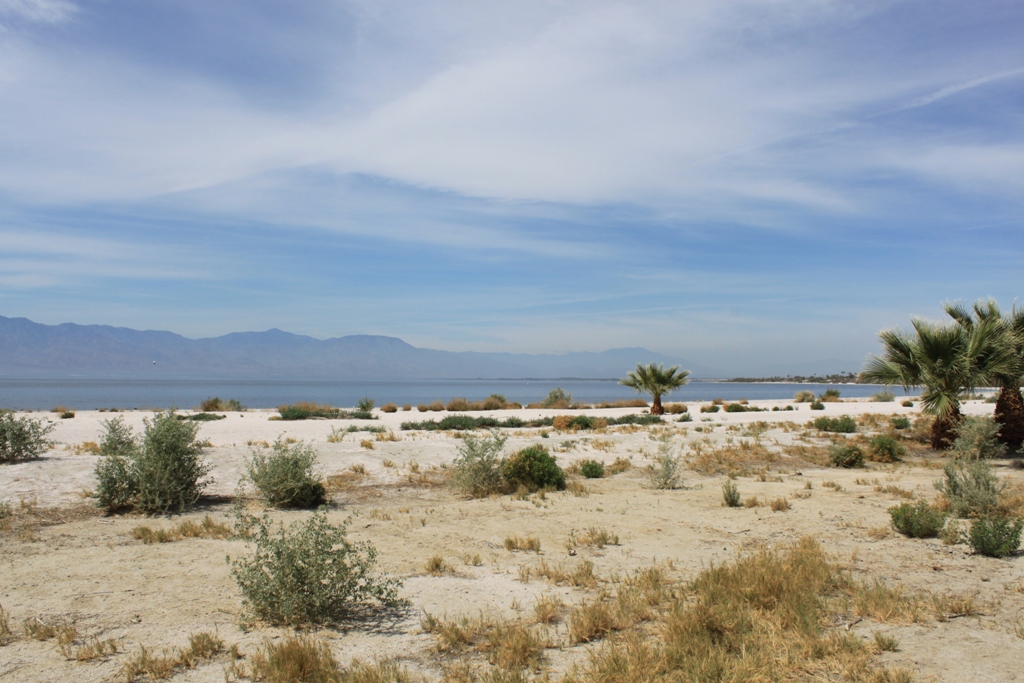 Why is it drying up? Well, the Salton Sea was created by accident back in 1905 when the Colorado River left its channel and started flowing in the Salton Sink, which it did for nearly two years. It’s quite the long story, much longer than what can be told in a photoblog post, so to keep the story short, what you really need to know is that it was, by no means, a natural occurrence. Man created a situation that allowed the river to leave it’s channel.

Now, while it is true that periodically over the geologic history of the area, the river would turn into the Salton Sink instead of the Gulf of California, it would do so because of natural forces; those same forces that would eventually cause the river to turn back. But not in this case, and there was real fears that the flooding may never stop.  It took 7 tries and about a million and a half of Southern Pacific Railroad’s dollars to get the river back into its channel, and once they did, the Salton Sea is what was left in the wake.  The picture below is from one of the attempts to close the break.  It’s an incredible story, one I do plan to tell one of these days.  (Photo below courtesy of the Bureau of Reclamation.)

So after they closed the break and the Colorado River was once again flowing towards the Gulf of California, there was the Salton Sea left over in the distance.  At the time, the Imperial Valley was just in its infancy of being developed and many of the farms had been literally washed away, but those that survived the flooding stayed on.  Life settled back into normal, the farmers turned their attention to farming and didn’t pay much mind to the lake in the distance, except perhaps for the occasional picnic.  Without any natural inflows, scientists thought it’d be dry by 1914, or so.  (Picture below courtesy of the Coachella Valley Historical Society.) 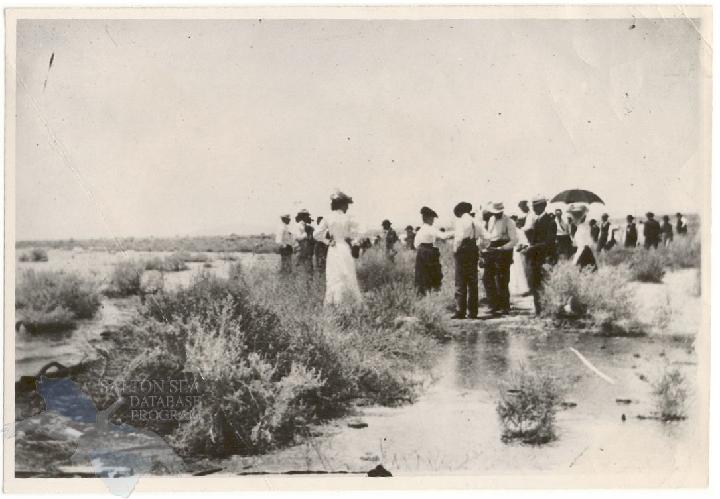 But hey, guess what – it didn’t dry up.  As it turned out, the Salton Sea became a handy place for the farmers to dump the drainage water from their fields.  Even President Wilson agreed, signing an executive order in the 1920s to designate the Salton Sea as an official  agricultural sump.  And so, for all of these years, it is agricultural drainage that has sustained the Salton Sea. 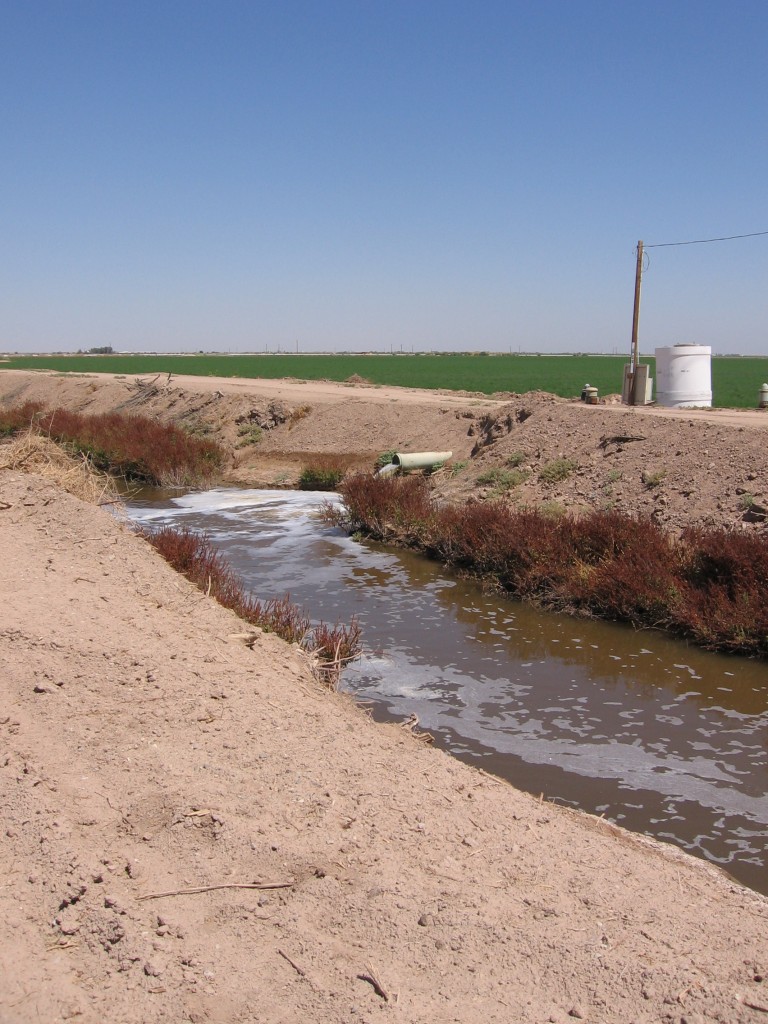 Back in the 1950s, officials wanted the sea to have fish so they headed down to the Sea of Cortez, filled up a few large nets with fish, trucked them back and dumped them in the Salton Sea.  Some of the fish actually did survive and for awhile, the sea was great for fishing.  In fact, in the 1980s, more people visited here than Yosemite.  (Picture below courtesy of the Coachella Valley Historical Society.) 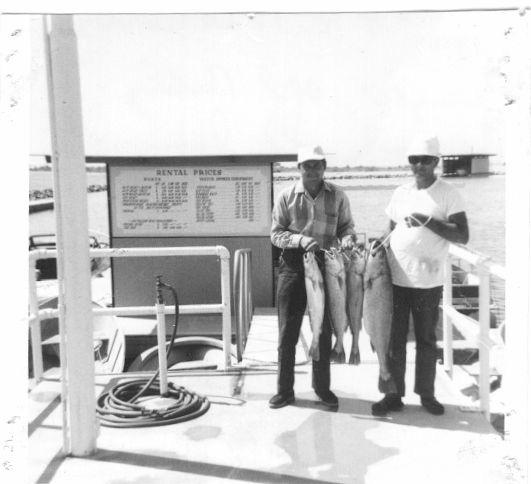 But now the sea is too salty for most fish; the only fish left in the sea are the hardy tilapia that have somehow managed to adapt and even proliferate.  Fish die-offs are a regular occurrence and generally occur in the hot summer months when temperatures soar and oxygen in the water is depleted.  The shores are littered with the remains. 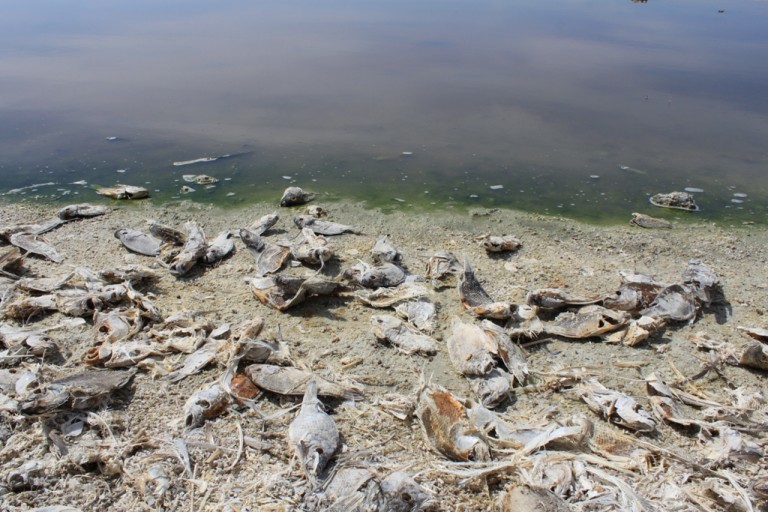 You probably won’t be surprised when I tell you it smells a little strange around here.  And the sand I am standing on isn’t really sand … but fish bones.  Seriously. 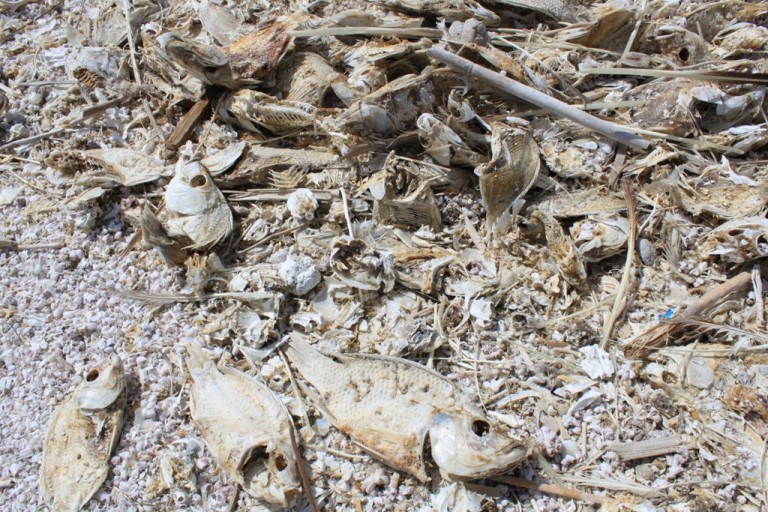 The Salton Sea’s strange ecosystem – not one created by nature but introduced by man – is an odd mix but strangely productive.  And it supports an amazing number of birds.  Where we are is not the best place to see the birds, however; further south at the Sony Bono National Wildlife Refuge, you would see birds like this … 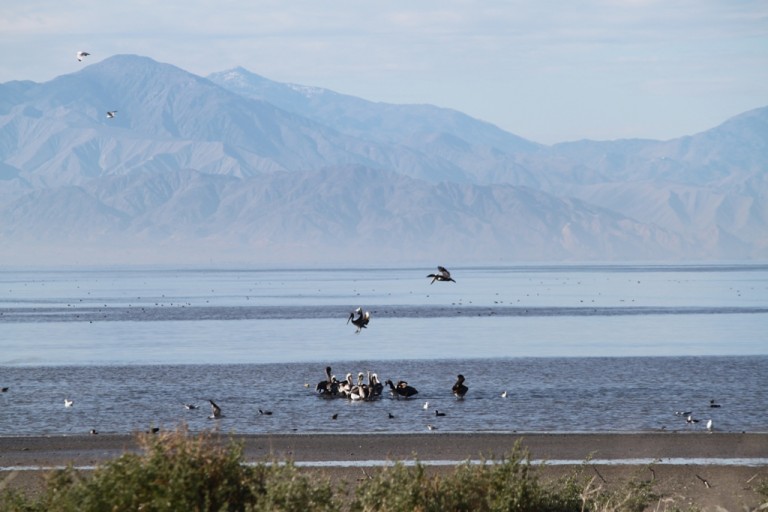 Over 400 different species of birds have been found here. 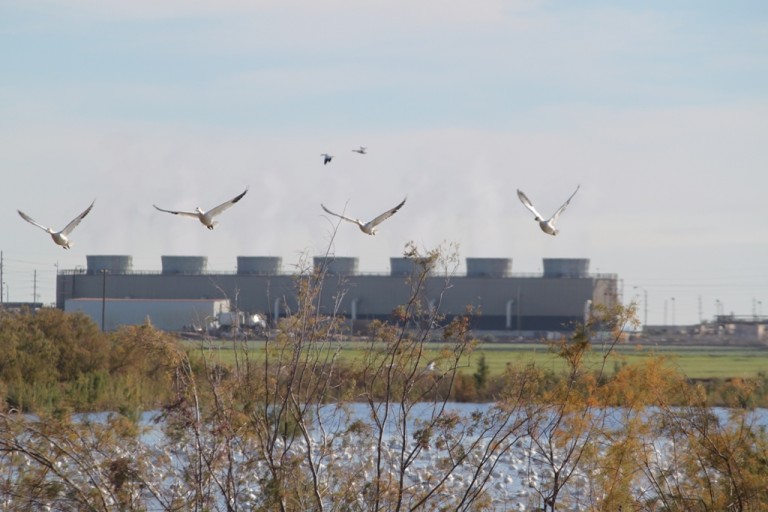 There are birds here all year long, but the numbers are highest here from November to May. 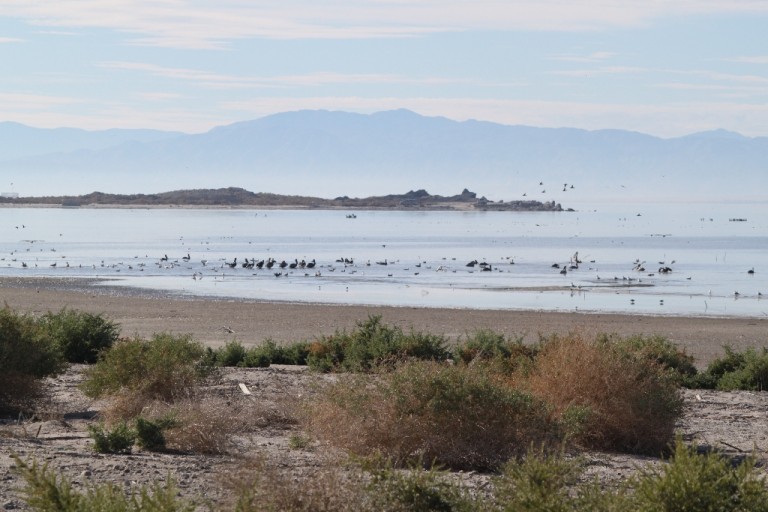 But further north and on the eastern side of the sea is where we are today.   Biologists are discussing their efforts to create alternative habitats for the birds as the sea is drying up, losing about one foot per year. Take a look at this picture below. This is March of 2010, or about two years prior to today.  Notice the wooden pole in the water … 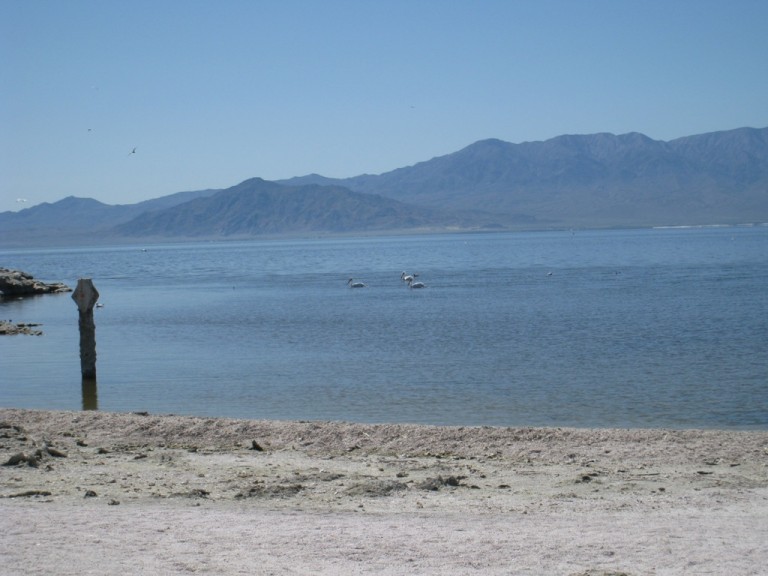 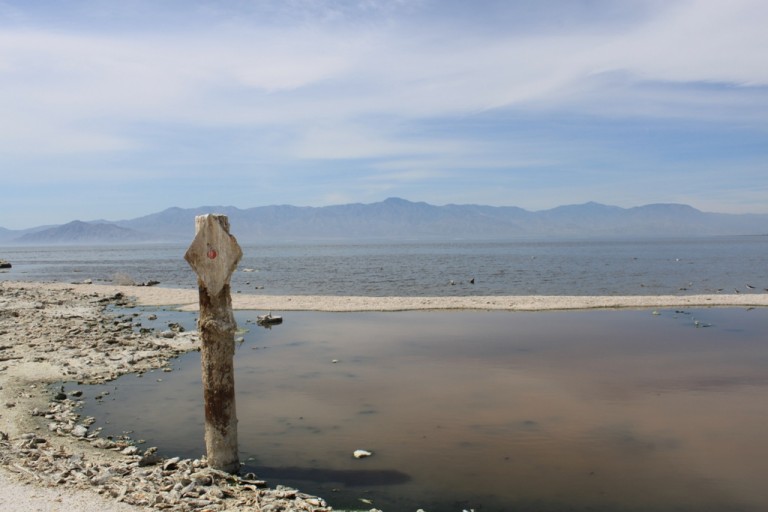 The Salton Sea is salty, and getting saltier every day. Agricultural drainage is a necessary part of irrigating the desert; the naturally-salty soils need to have the salt leached from the root zone in order for plants to grow. You can’t grow crops in the desert if you can’t leach the salts from the soil, and so that salty water ends up in the sea. 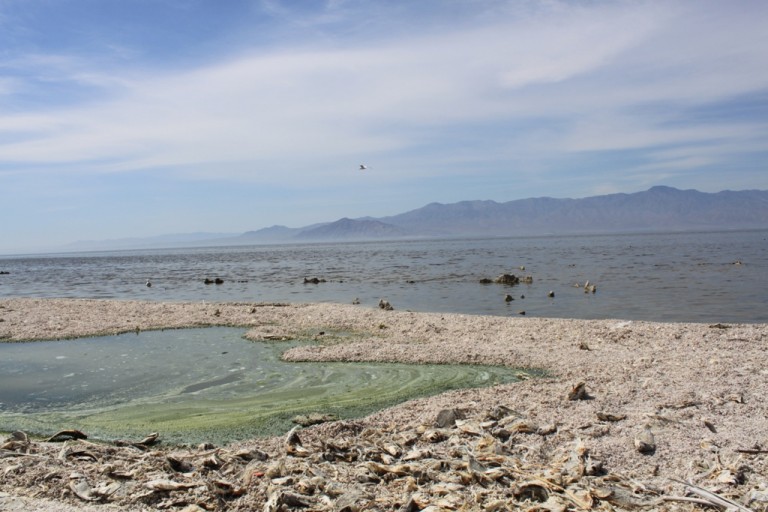 The Colorado River’s water is allocated down to the last drop and in most years, water doesn’t reach the river’s Delta in the Sea of Cortez (or Gulf of California). With nowhere else to go, the birds have ended up here. The Salton Sea is a major stop for migrating birds on the Pacific Flyway … there isn’t another suitable stop for hundreds of miles. 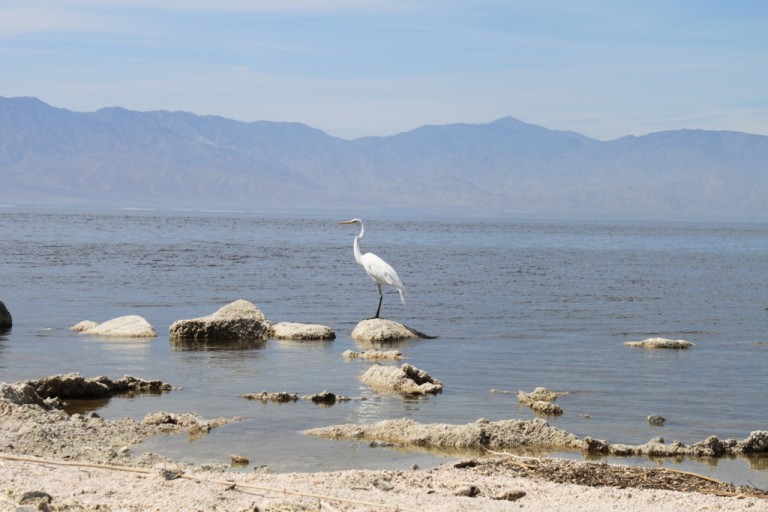 Even so, the Salton Sea faces an uncertain future.  A few years ago, the state came up with a plan to ‘save’ the lake – it involved diking off portions of it and creating a salt sink in the middle and a recreational ‘lake’ around the edges.  It all looked quite complicated and came with a stunning price tag – $9 billion dollars or so. 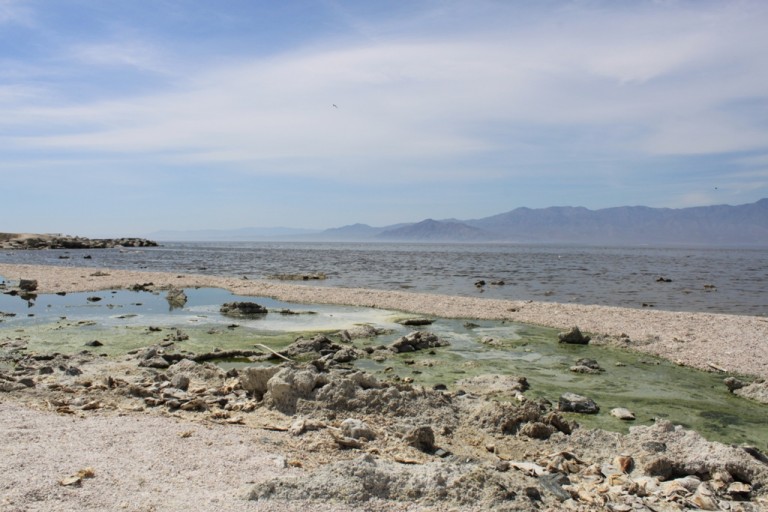 Unfortunately, there’s little political will in California to put up the money to fix this place, and with a price tag as high as that in a state where school funding and taxpayer services are being slashed, there simply isn’t any money for it either. (Oh, and we have this other big water problem to fix in California called the Delta, which promises to cost at least that much.)  No federal funds are available for this, either. 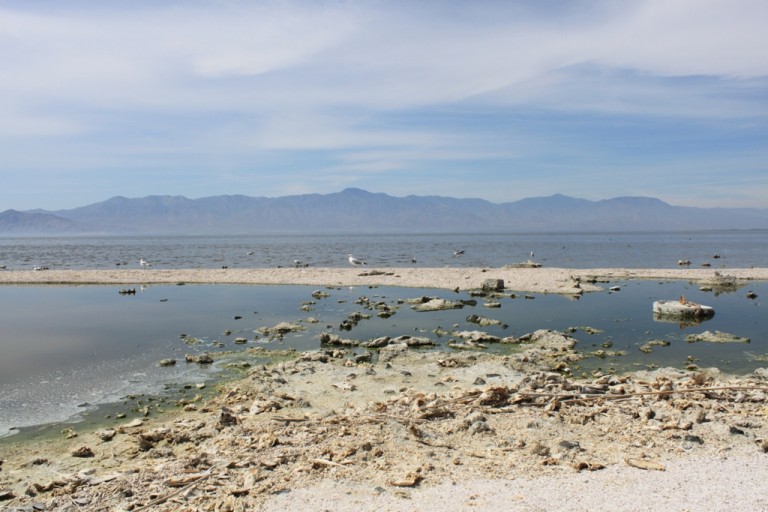 This particular place I am at, the Salton Sea Recreation Area, was on the long list of state parks slated for closure due to the budget.  That closure was narrowly averted due to aggressive fund raising efforts by the community. 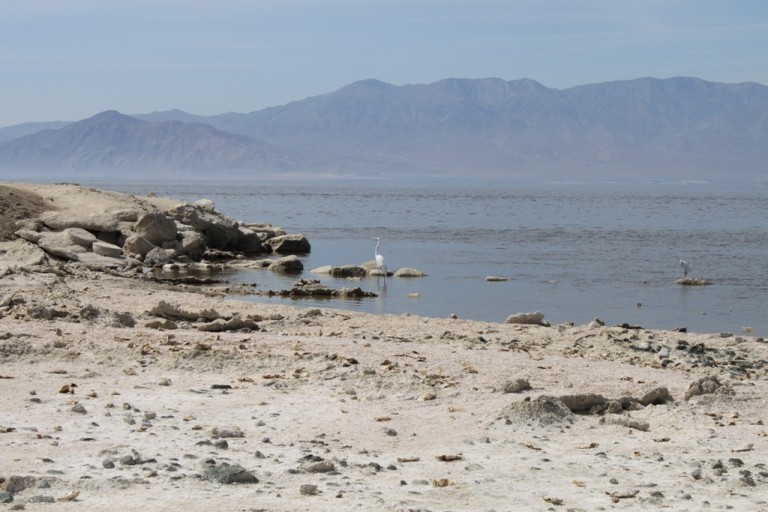 This place, as wacky as it might appear, is loved by those who live here.  The visitor’s center is even staffed by volunteers.  I’m glad they were able to keep this place open.   However, I have to say that I’ve been here several times during the winter months when the weather is beautiful, but rarely have I ever seen other people here (although I’m sure the campgrounds are full during the Coachella music festival). 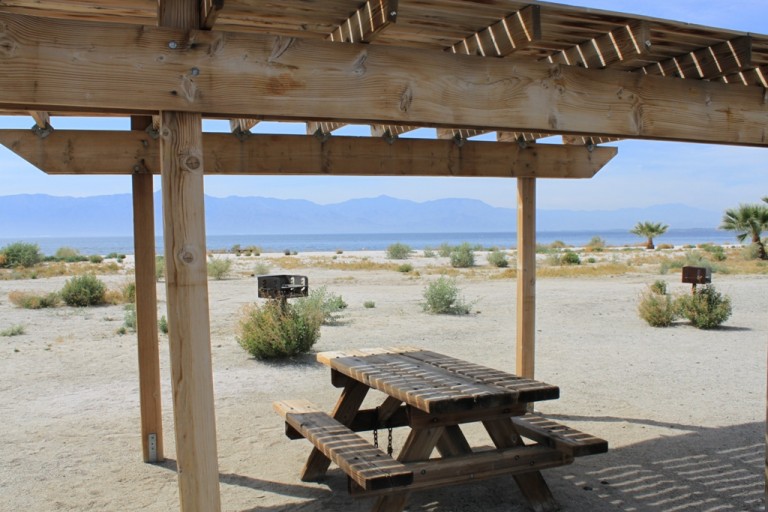 I don’t know what the ultimate answer is for the Salton Sea.  If we do nothing, the Salton Sea will continue to dry up, eventually becoming too salty to be useful habitat for the birds, and that could be disastrous.  The sea will turn into a red, hypersaline lake as halobacteria take over.  In addition, the dust storms that will likely occur as high winds hit the playa could rival those of Owens Lake.

However, there just isn’t enough water to continue dumping into the Salton Sea – the amount going in to the Salton Sea is about three times the water that Las Vegas has been allocated from the Colorado River, and the other states that share the river have adamantly agreed that no water from the river is to be slated to go to the sea.  The restoration plan the state has proposed is just too expensive, and has been collecting dust on a shelf.

You can’t irrigate the Imperial Valley without leaching the soils and creating agricultural drainage water.  Desalination plants, pipelines to the ocean … so many things have been suggested, but all so … expensive, and each present large problems of their own.

Local interests are trying to take over the process, proposing public-private partnerships for revitalizing the sea.  It remains to be seen how much traction they’ll get.  These are tough economic times, and in the meantime, the sea just keeps getting smaller and saltier. 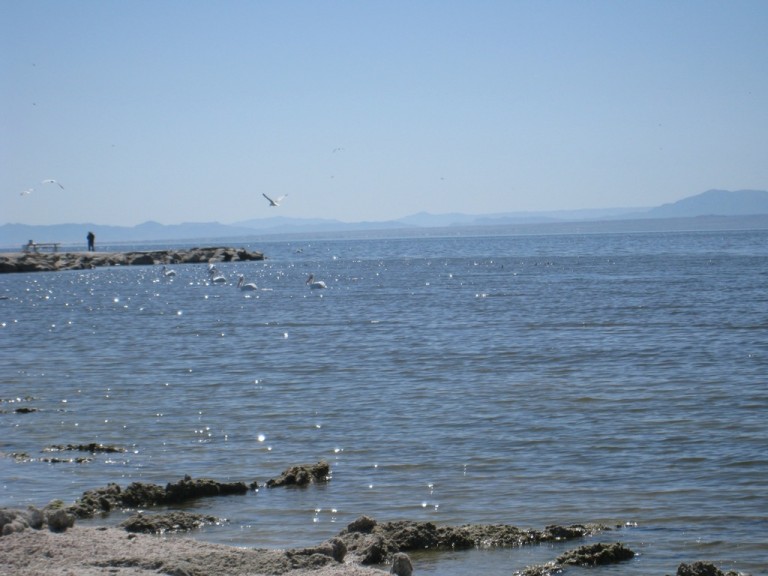 For more of my photoblog posts on the Salton Sea:

For more information on the Salton Sea:

5 thoughts on “The shrinking Salton Sea”