The Colorado River is 1450 miles long, it’s watershed encompassing parts of seven U.S. states as well as Mexico. It’s headwaters are in the Rocky Mountains, but by the time it’s reached Arizona, it’s already been dammed, by Hoover Dam, Glen Canyon Dam, and more. 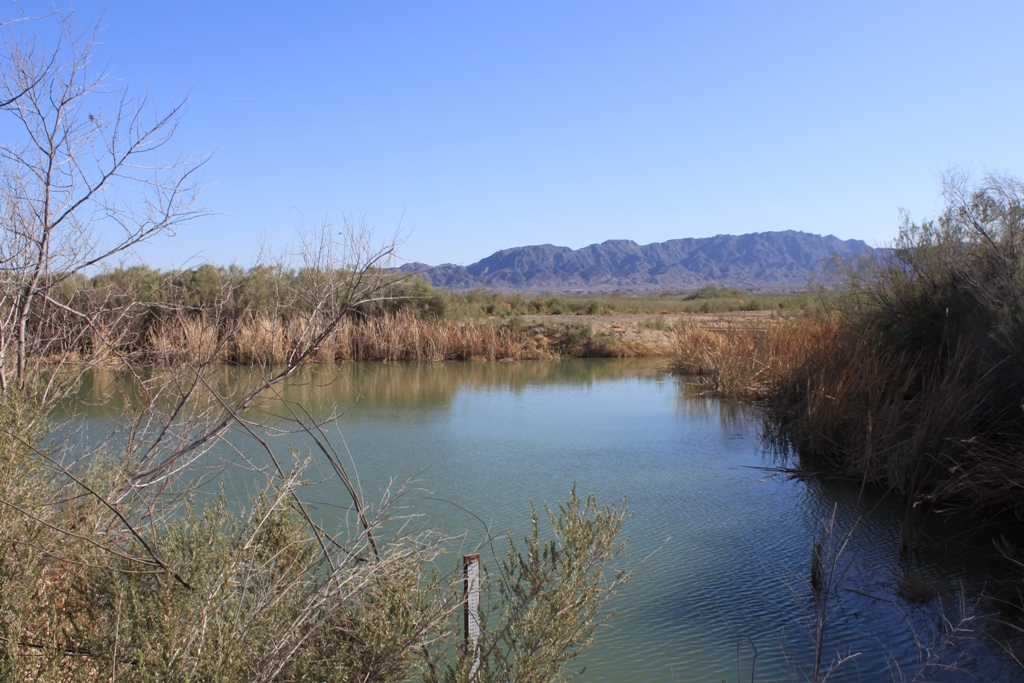 The Topock Marsh is southeast of Needles on the California-Arizona border. This post will cover about a 60-mile section of the Colorado River area from the Topock Marsh to Blythe, and I’ll be using pictures I’ve taken over three different visits to the area.

Topock Marsh is part of the Havasu National Wildlife Refuge and is one of the prime birdwatching spots in the Southwestern U.S.  However, today, we are not here to look for birds.  Instead, I’m on another bus tour, and today we are learning about the efforts to bring back native fish to the Colorado River. 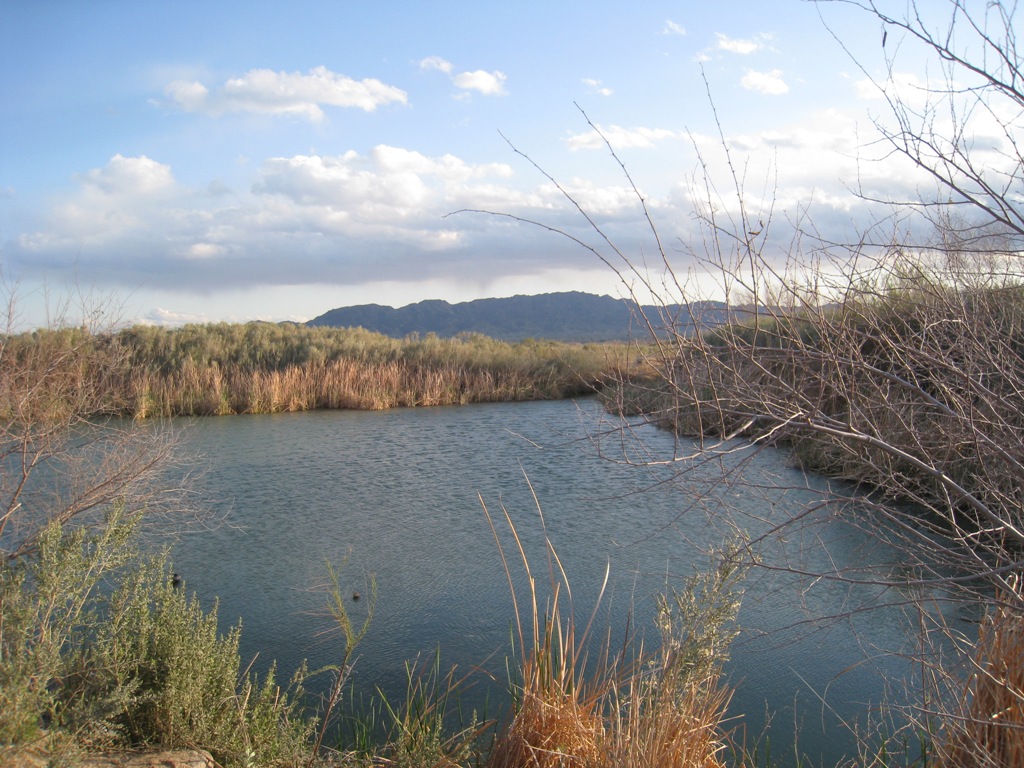 Topock Marsh is about 4000 acres, and represents about 40% of the remaining backwaters of the Colorado River. It is a critical resting place for migratory waterfowl and a home to resident songbirds, waterbirds, and other wildlife. 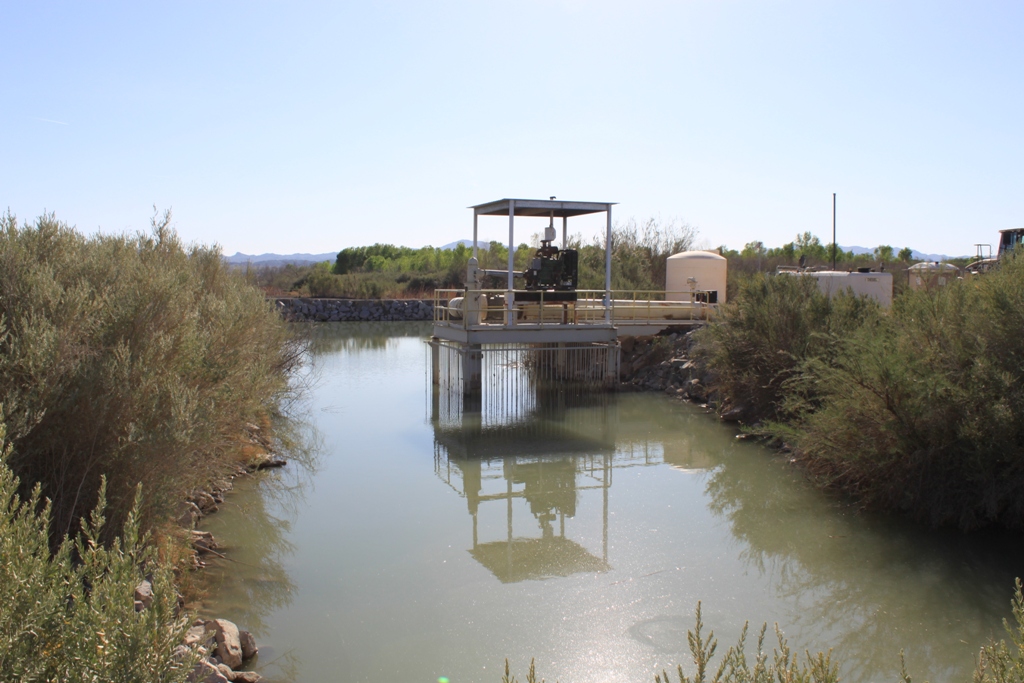 Efforts at Topock Marsh to bring back the native species of the Colorado River are part of the Lower Colorado River Multi-Species Conservation Plan, which extends over 400 miles and calls for the restoration of 8100 acres of habitat. 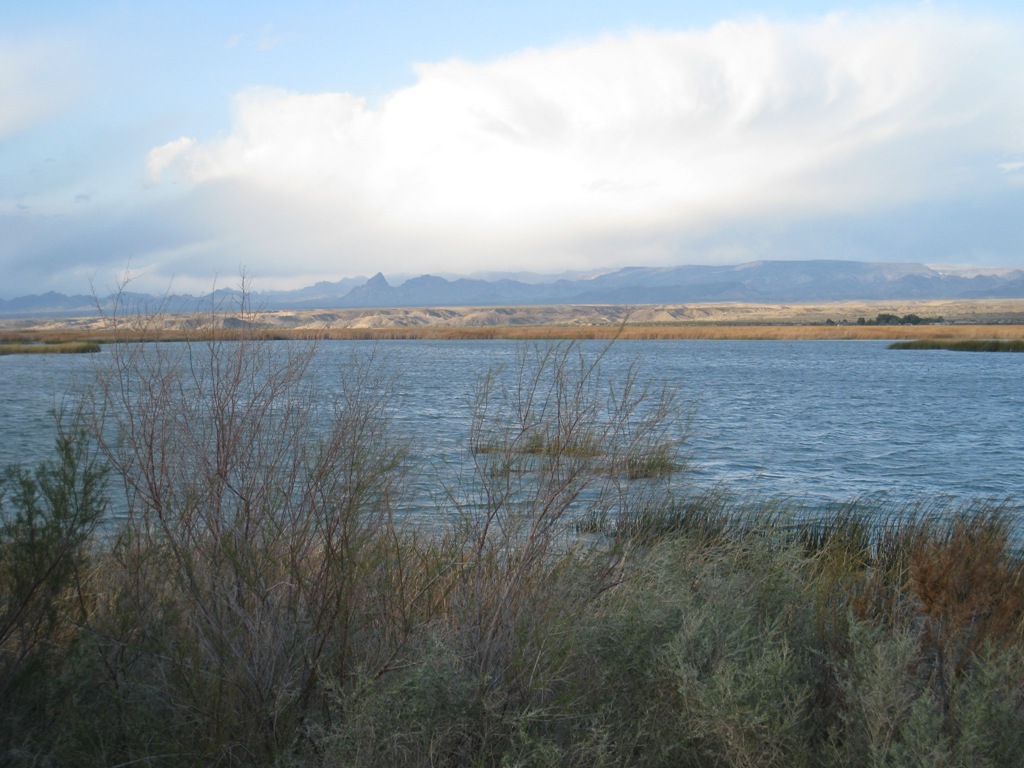 Here’s a photo from 1917 from the USGS library that shows how wide the river’s floodplain is at this point (although nowadays, Hoover Dam and Glen Canyon Dam prevent the flooding that used to occur on the river.)

Traveling south from Topock Marsh is this natural gas pipeline bridge, extending across the river. 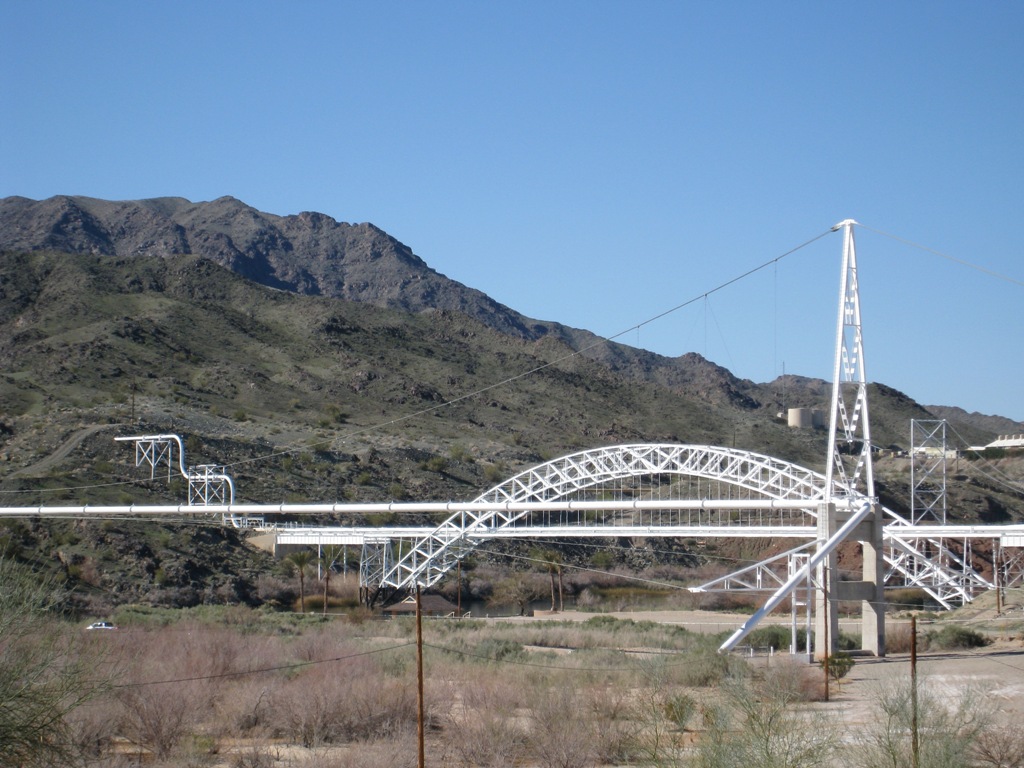 Below, here’s a shot of the Colorado Desert, close to Needles.  If my memory serves me correctly (and sometimes it does), the bridge in the above shot is behind me. 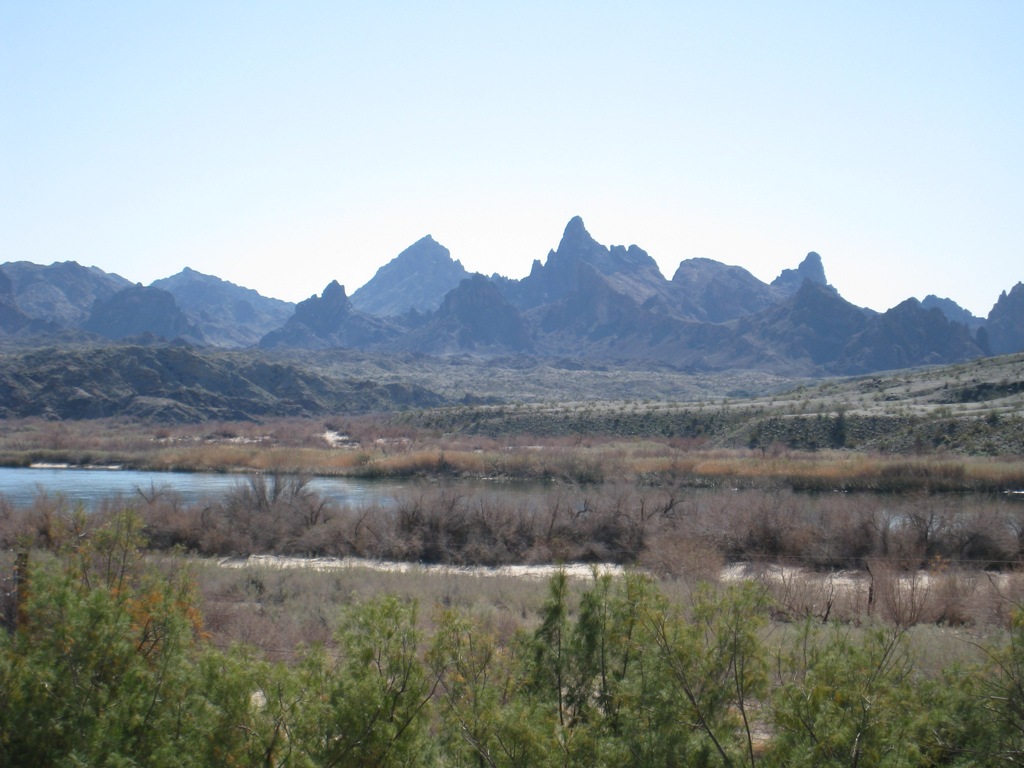 Just further south of Topock Marsh is a a place called “Catfish Paradise.” 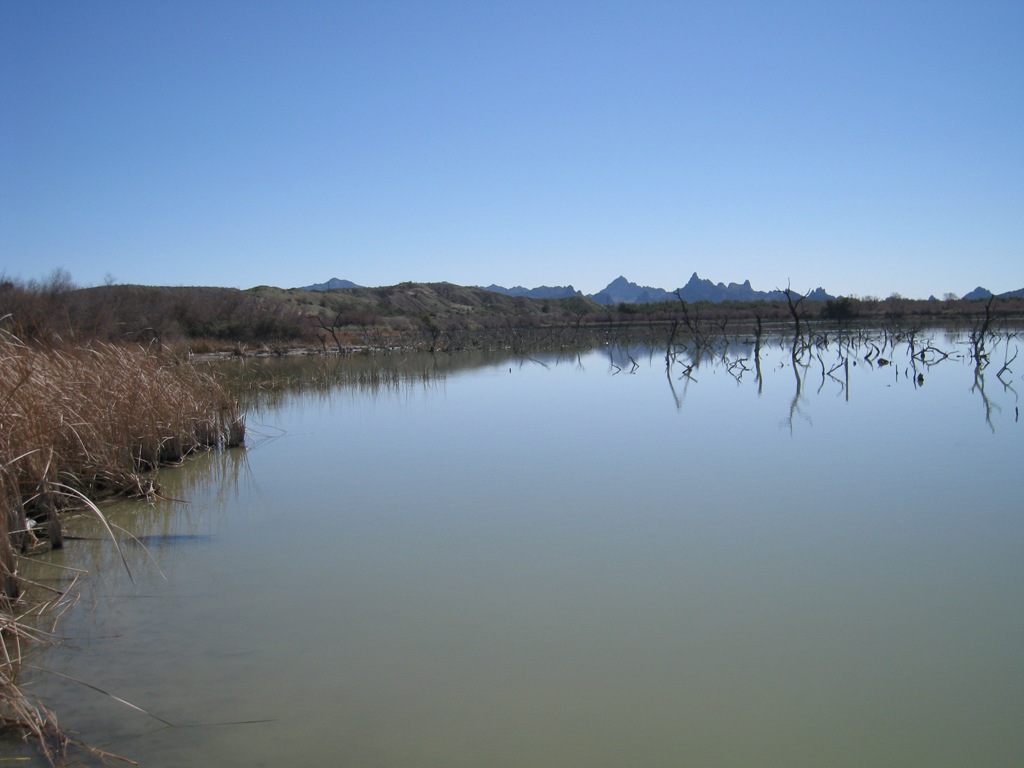 Now the river flows south into Lake Havasu, which truly lives a dual life. In the winter months, a calm, peaceful town for the snowbirds; and then, starting around spring break, it becomes the party-mecca for youth that will last through the summer … 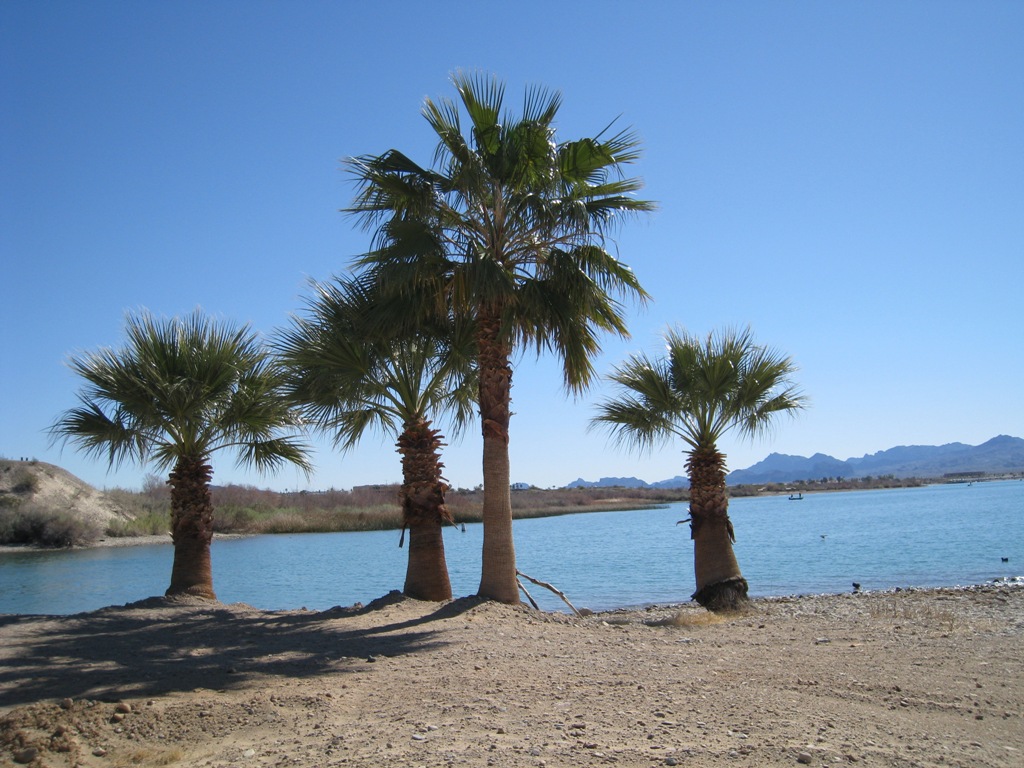 Lake Havasu is not a natural lake, but instead is formed by Parker Dam, which is part of the Metropolitan Water District’s Colorado River Aqueduct. Yes, Lake Havasu basically exists to be the forebay for the pumping plant which supplies Southern California with a good portion of its water. (I have extensively photographed the Colorado River Aqueduct and promise one day to put together either a post or a slideshow on the system.) 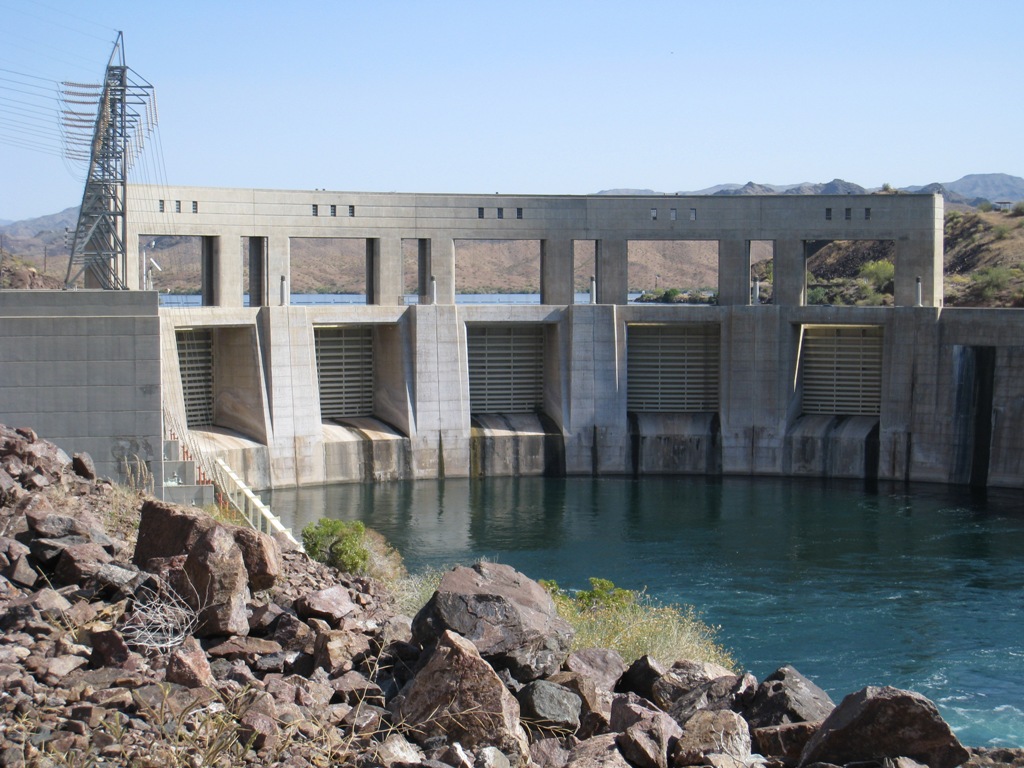 About 12 miles below Parker Dam on the Colorado River is the Palo Verde Diversion Dam. A diversion dam is different than a high dam; it acts more like a weir, raising the level of the river so that a portion of it can be diverted into a canal. 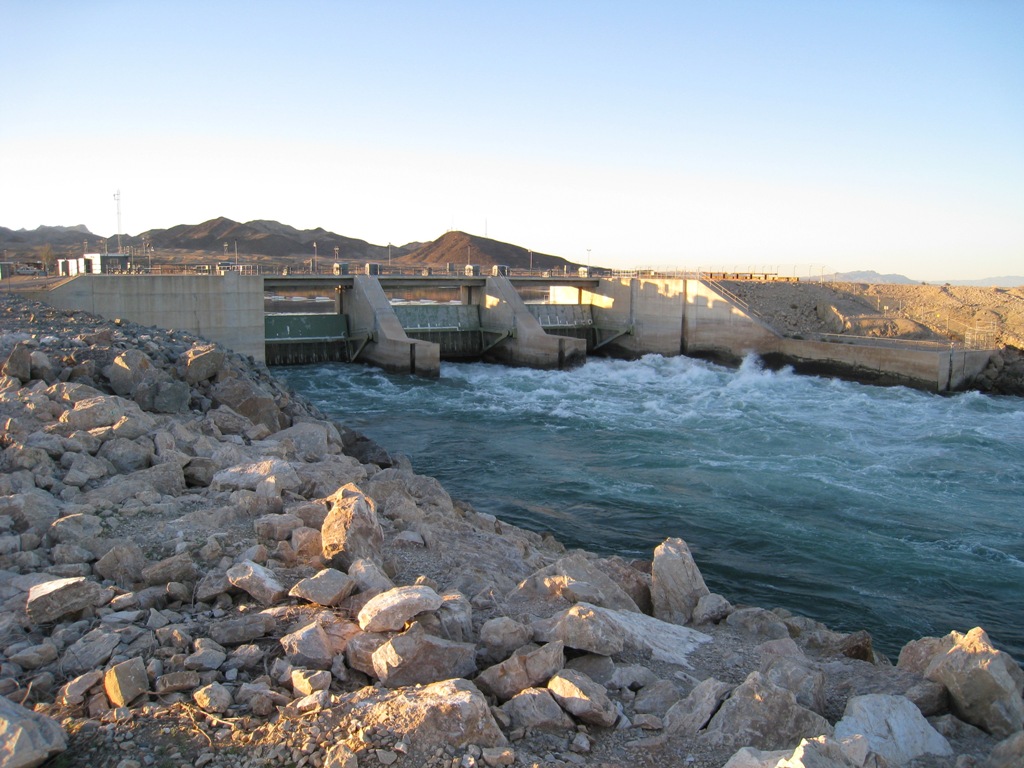 When the gates on the dam are up (as they are now), the level of the river rises and a portion of it will flow into the irrigation canal (located off to the side, not in the picture). When the gates are completely open, the river will simply flow along. 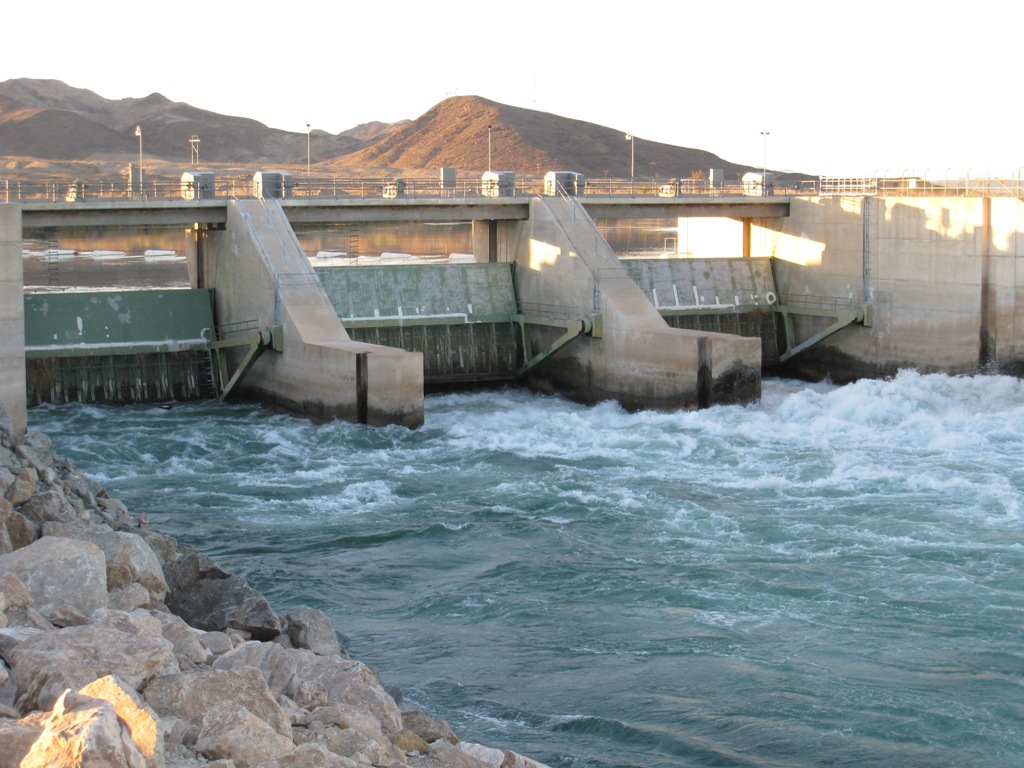 This is the irrigation canal that delivers water to the Palo Verde Valley, where the town of Blythe is located. 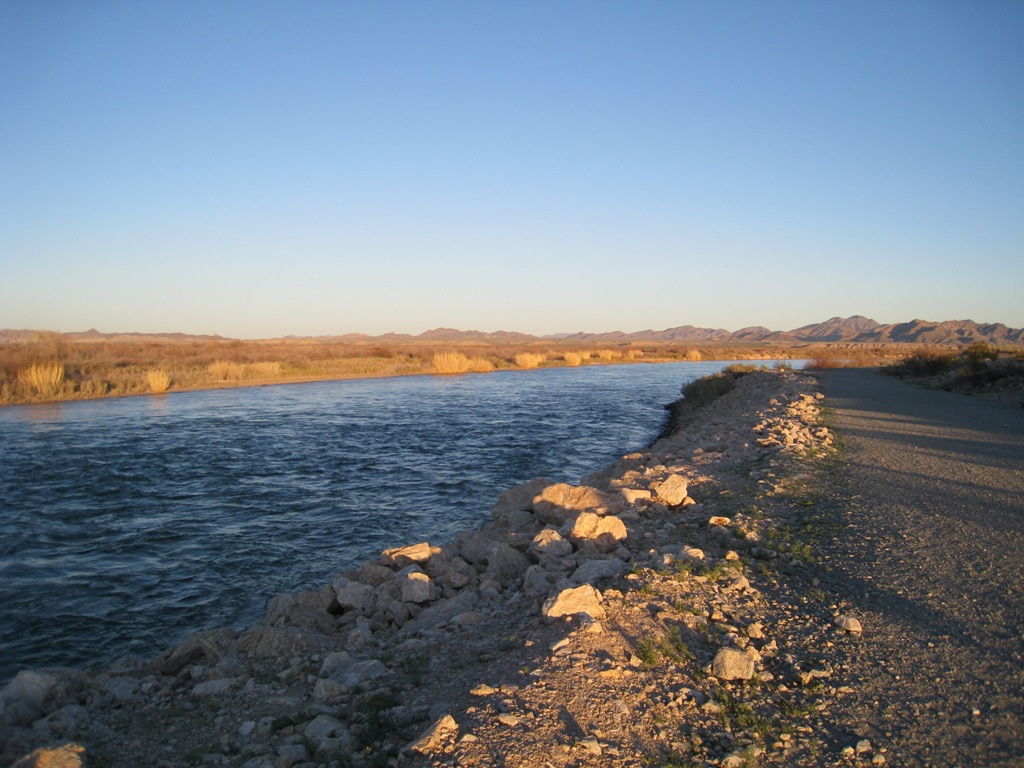 As you might have noticed, the sun is setting as we race on to Blythe, trying to get a last bit of sunlight before the day is lost. 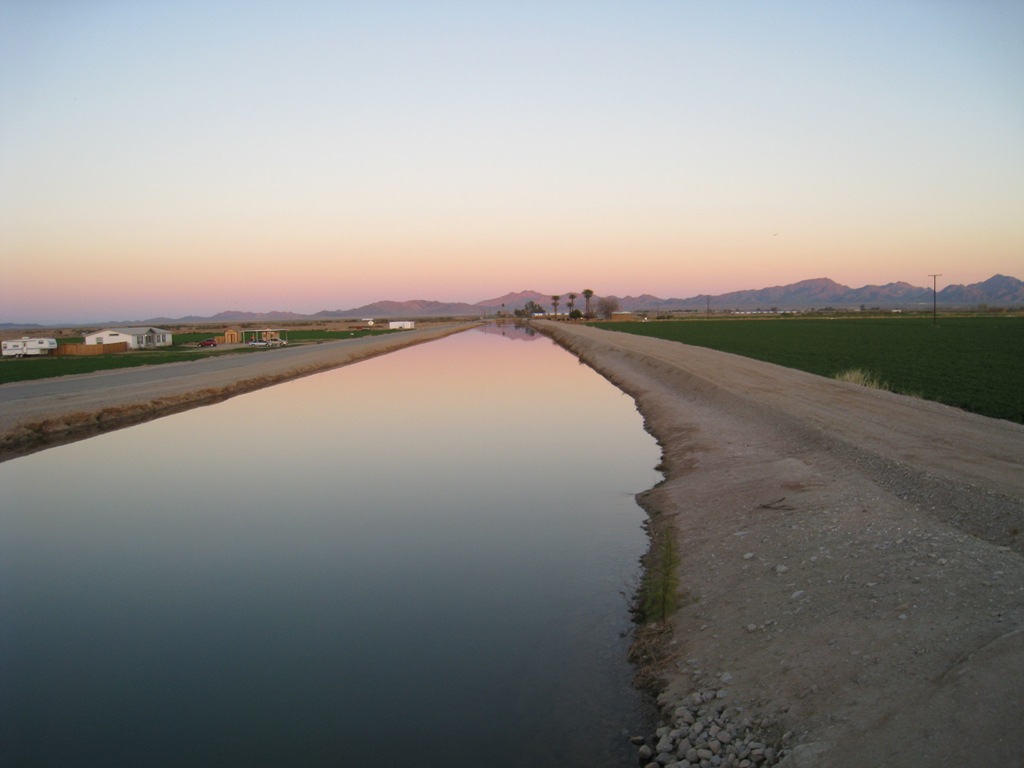 I reach Blythe just as the sun is setting, and I am able to capture these last shots.  Blythe is one of the oldest irrigation settlements on the Colorado River, with water rights dating back to the late 1800’s. 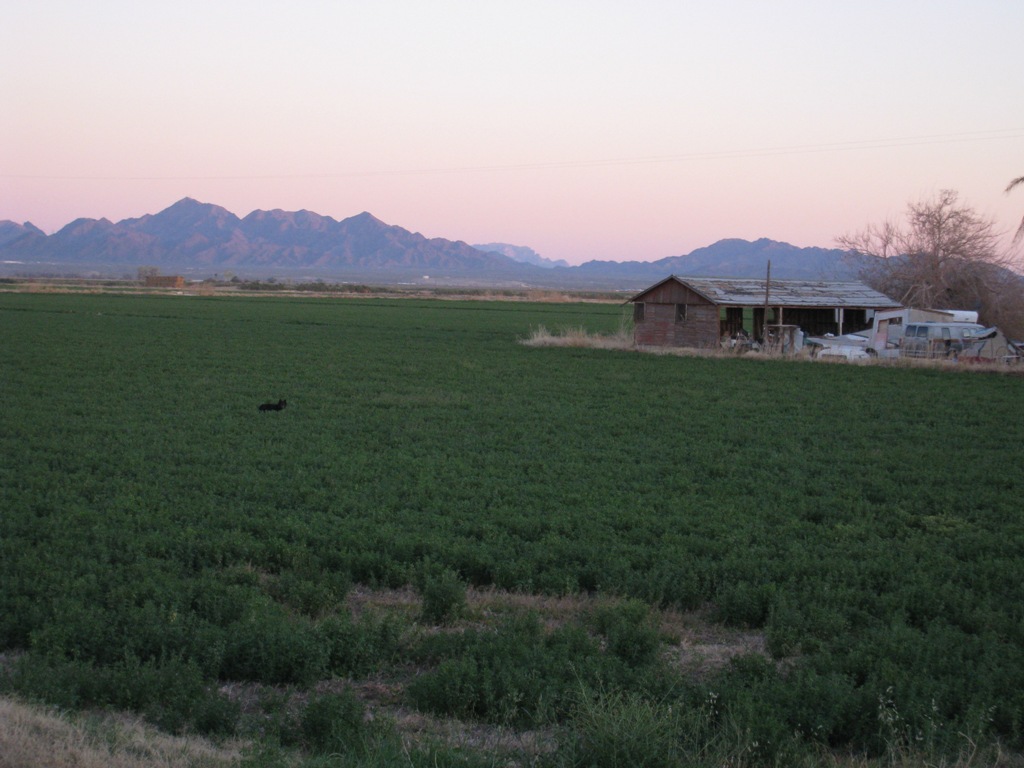 I wish I had more pictures of agriculture around Blythe, but unfortunately, the sun has punched its timecard for the day, and so my picture taking time is over. … 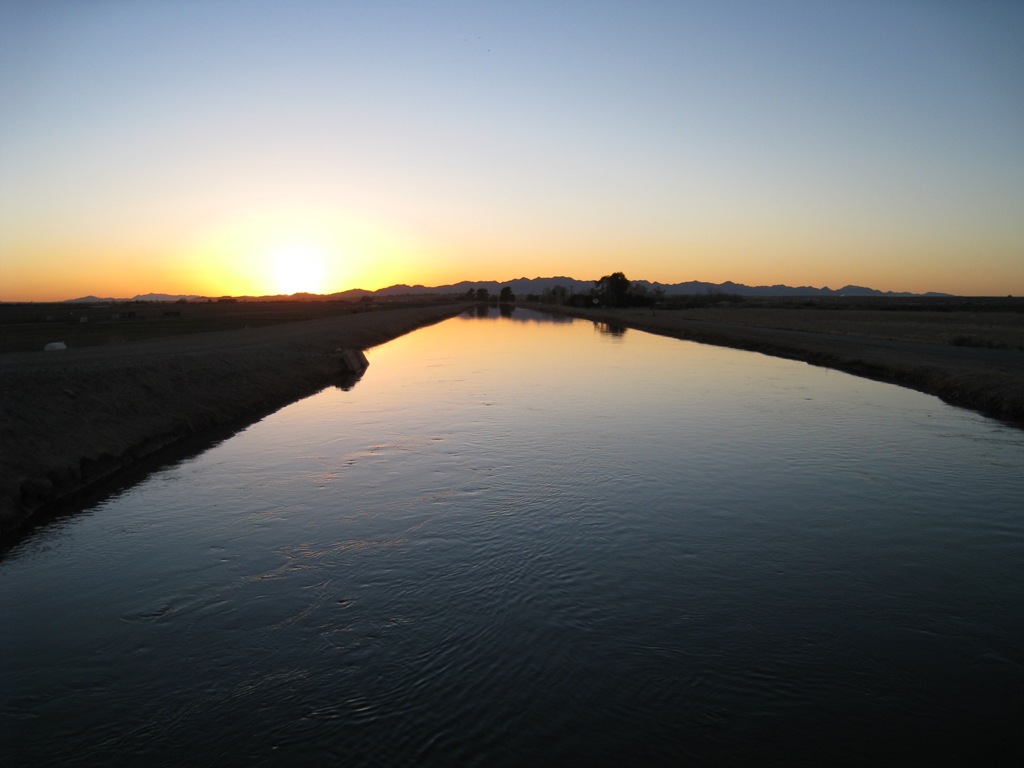 So long from Blythe!