Back in 2011, I happened to be in Sacramento during a time when it was raining intensely and water was flowing over the Fremont Weir.  I wanted to see what the area looked like when it wasn’t under flood conditions, and so in June of last year, I headed out there.

First, I should say that the drive out to the weir is in and of itself, quite charming.

There are some beautiful farms along the way. 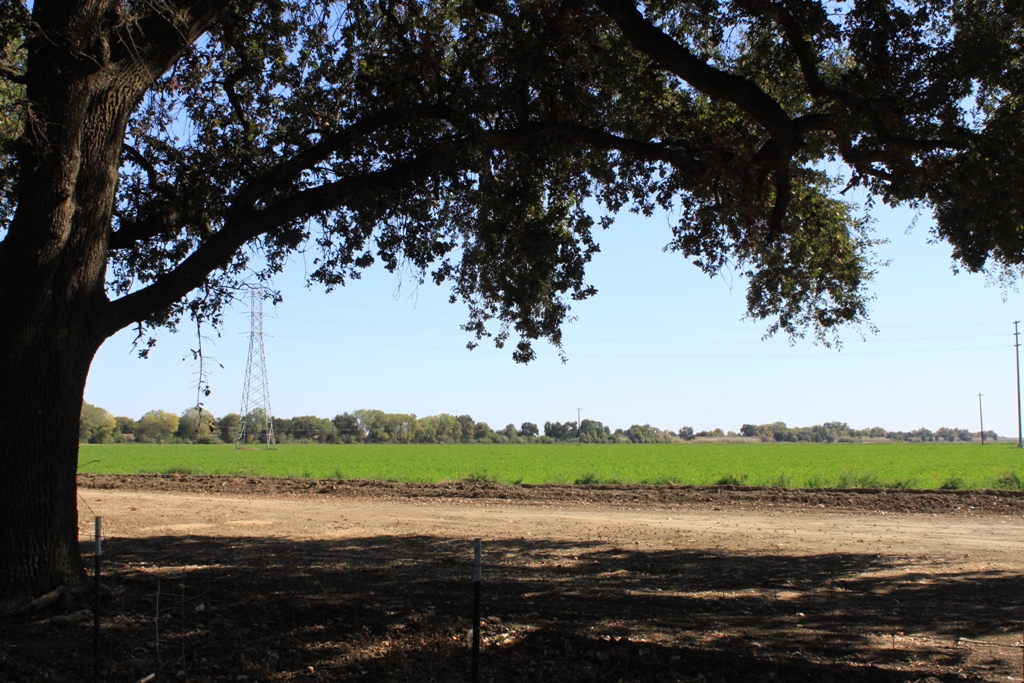 The road out to the weir runs along a levee and passes some abandoned farms. 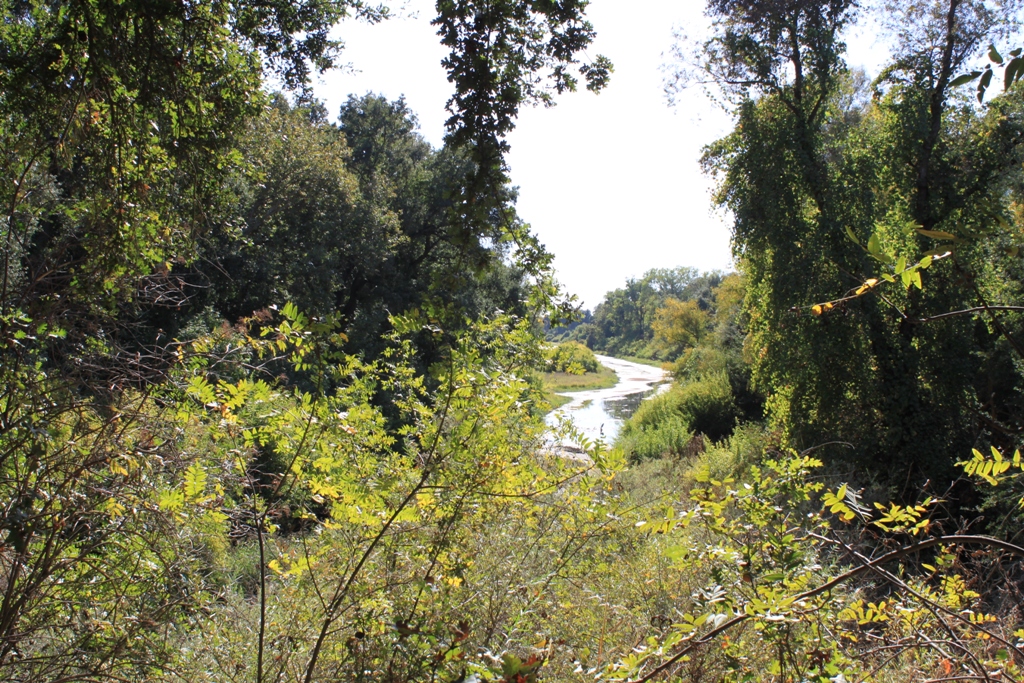 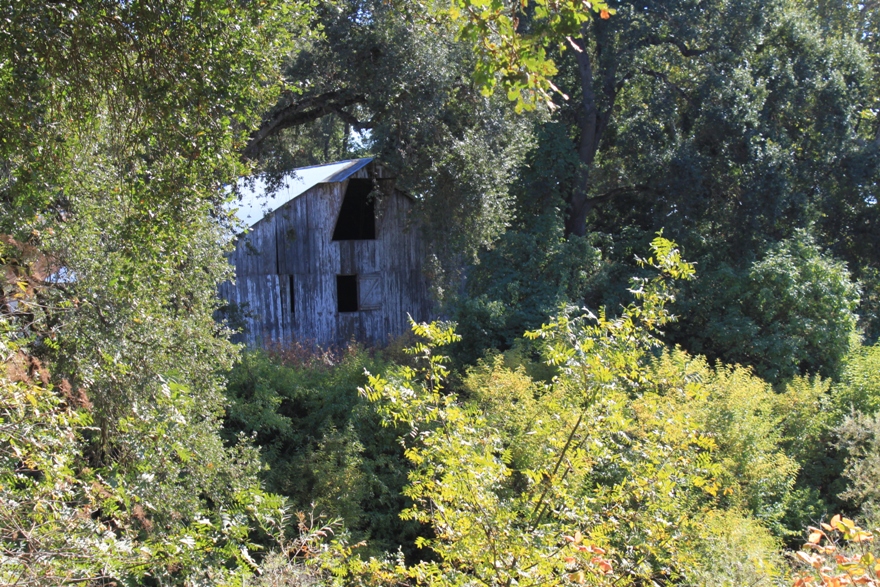 The picture below is from my trip out there on the rainy day. 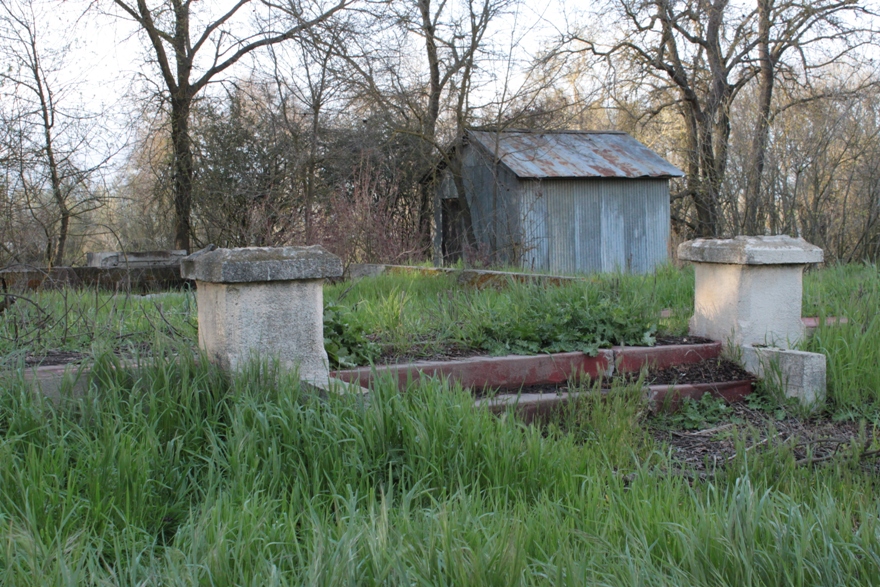 I had hoped to return yet again in the upcoming weeks to see what the area looks like with low Sacramento River flows, but an article in the Davis Enterprise alerted me that the road and parking lot are now closed due to some sort of snafu where everyone thought the state had an easement for the parking lot, but apparently not, so for now, and most likely forever, this side of the Fremont Weir is pretty much inaccessible.  (Read here).  I might go out and see what it looks like from the other side, however.

This are some views of the Sacramento River from the parking lot. 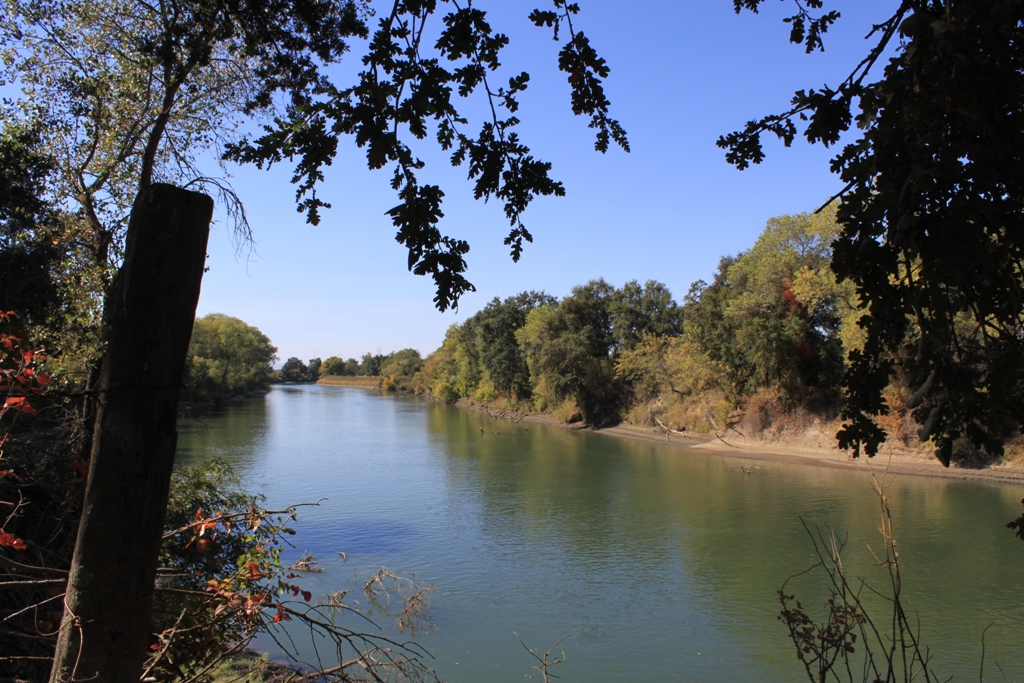 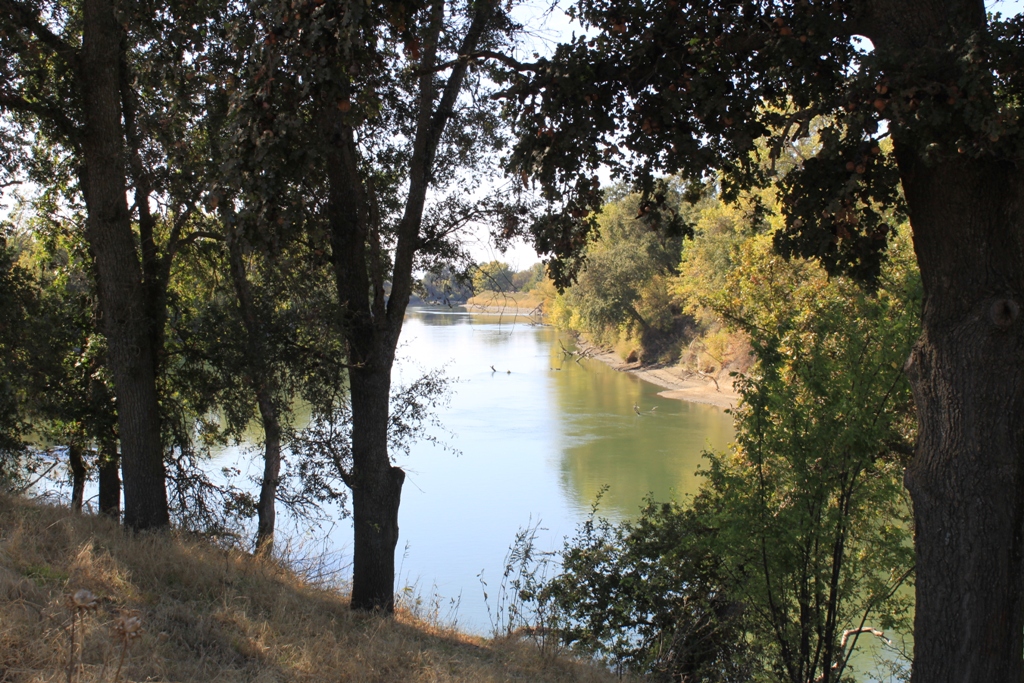 This was my picture about the same point when I was out there during the flooding in 2011. 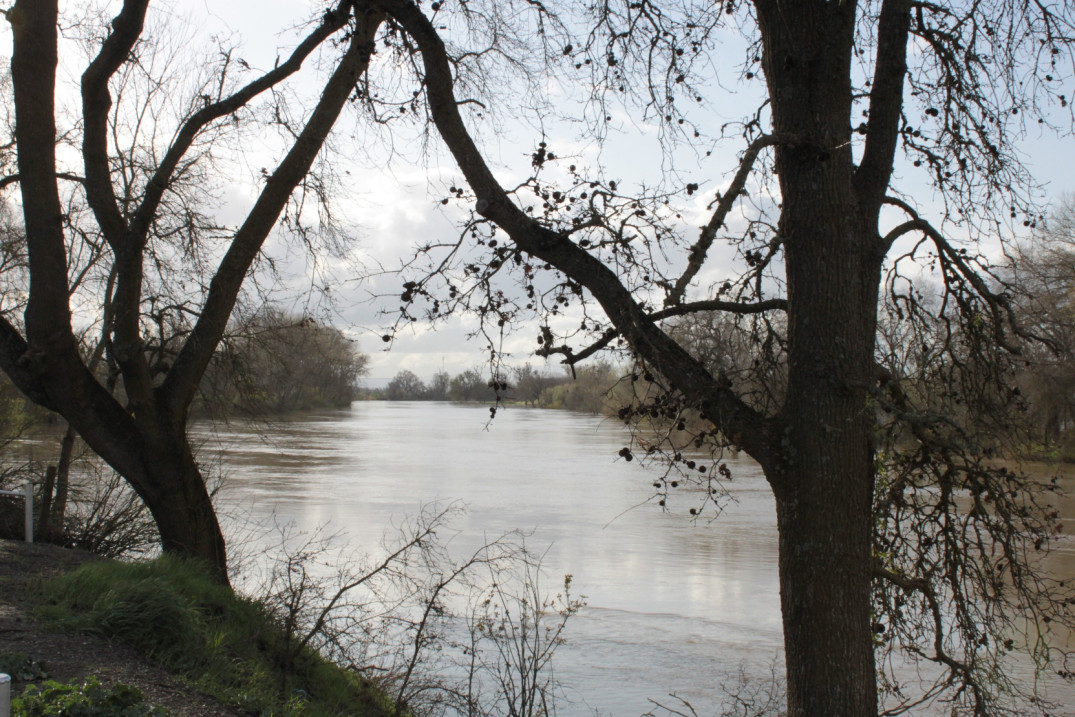 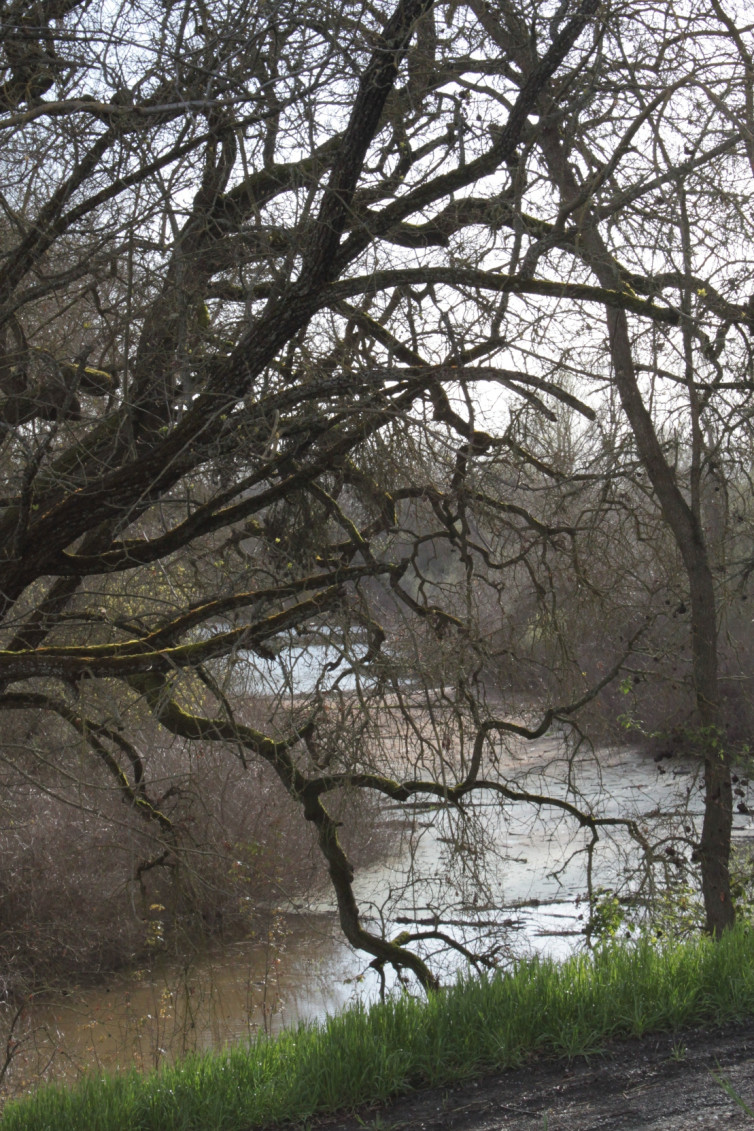 This is DWR’s measuring station in dry times … 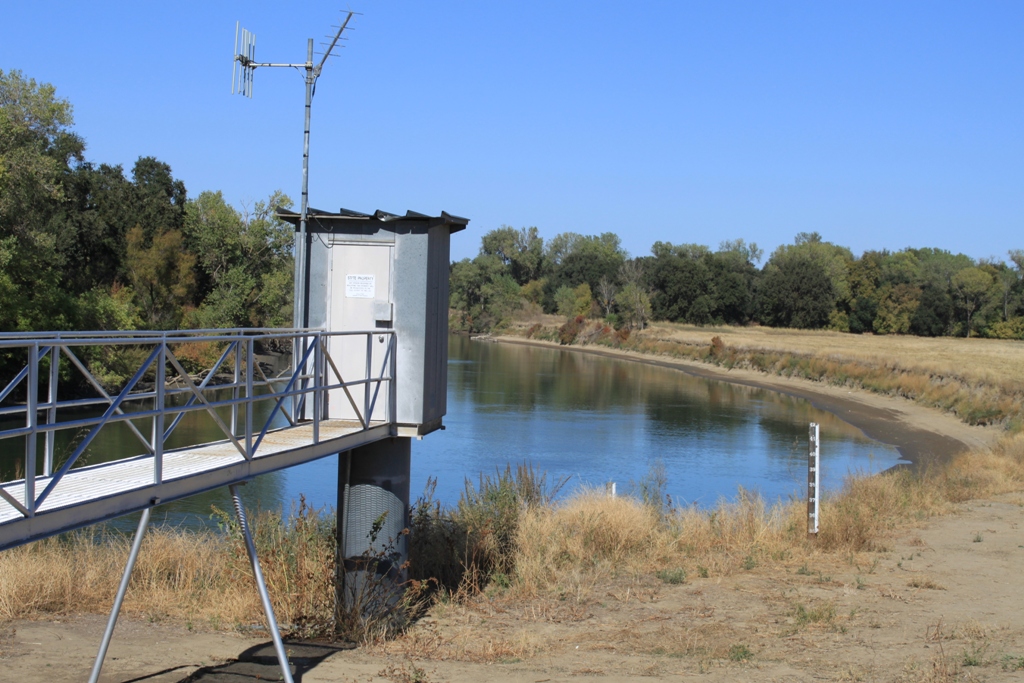 I can’t believe that while I was out there in 2011, I did not take a similar picture of the measuring station, but apparently I didn’t.  Here’s the only one I did take; you can see the water in the background; also note the measuring pole, which you can see in both shots. 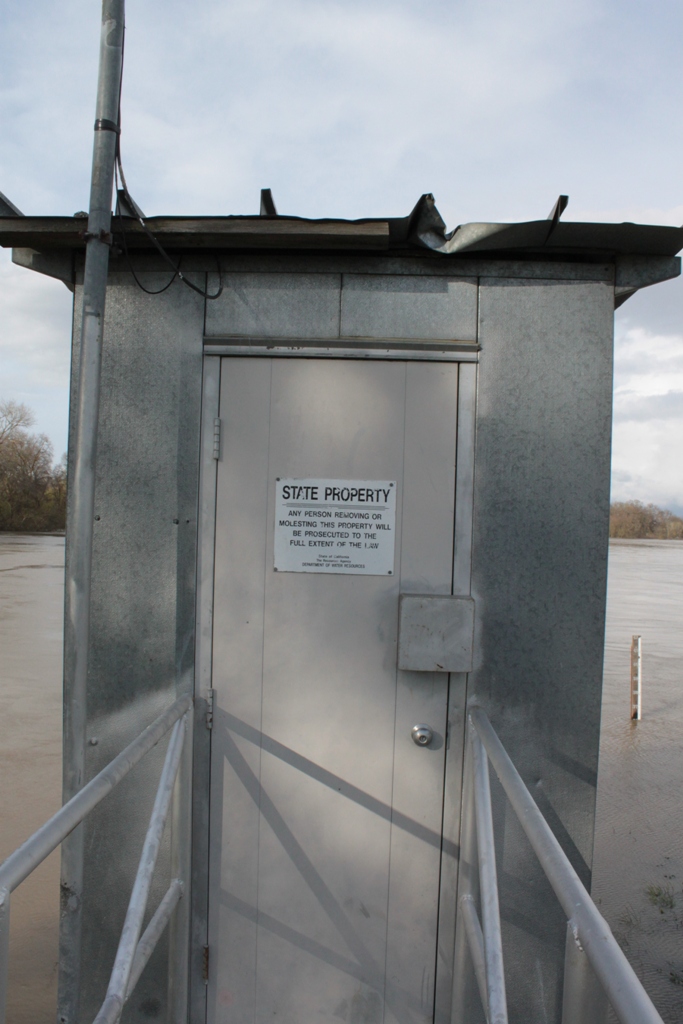 Here’s what Fremont Weir looks like when it’s dry. 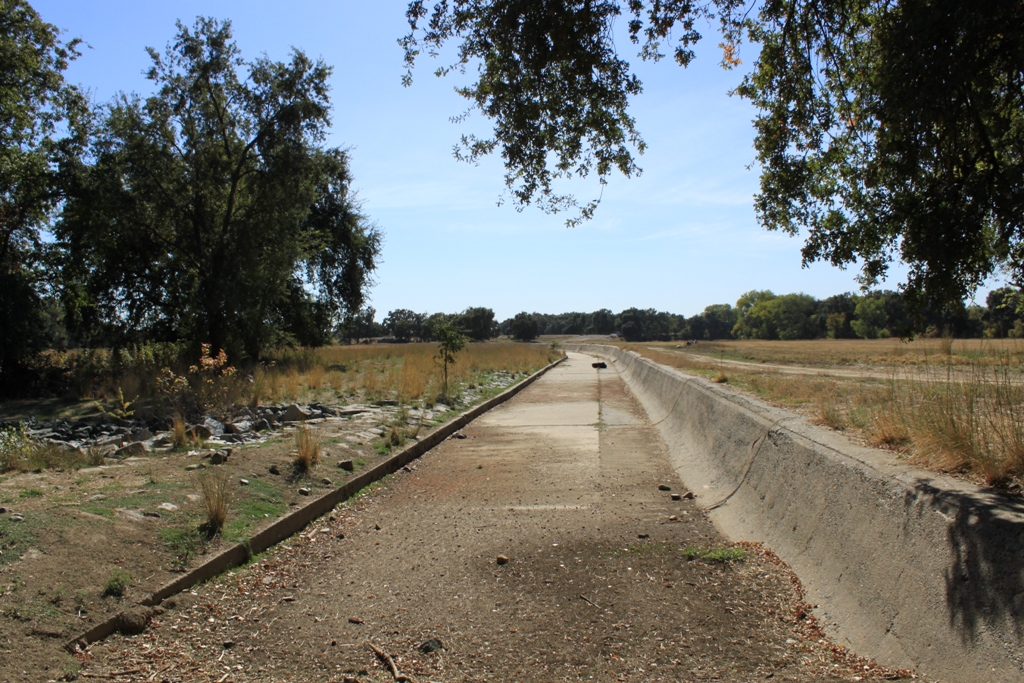 The picture below makes it easy to see how it works.  It was taken by Patrick Huber, otherwise known as Uncle Kick-Kick.  In this picture, Fremont Weir is the cement strucutre, and the Sacramento River is above it.  It’s easy to see how when the river rises, the water just flows over the top of the weir and into the Yolo Bypass. 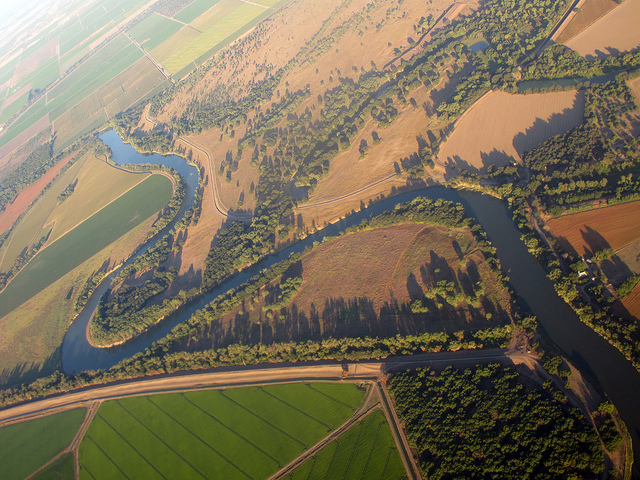 Here’s what Fremont Weir looks like when water is flowing over it … it’s that riffle out there. 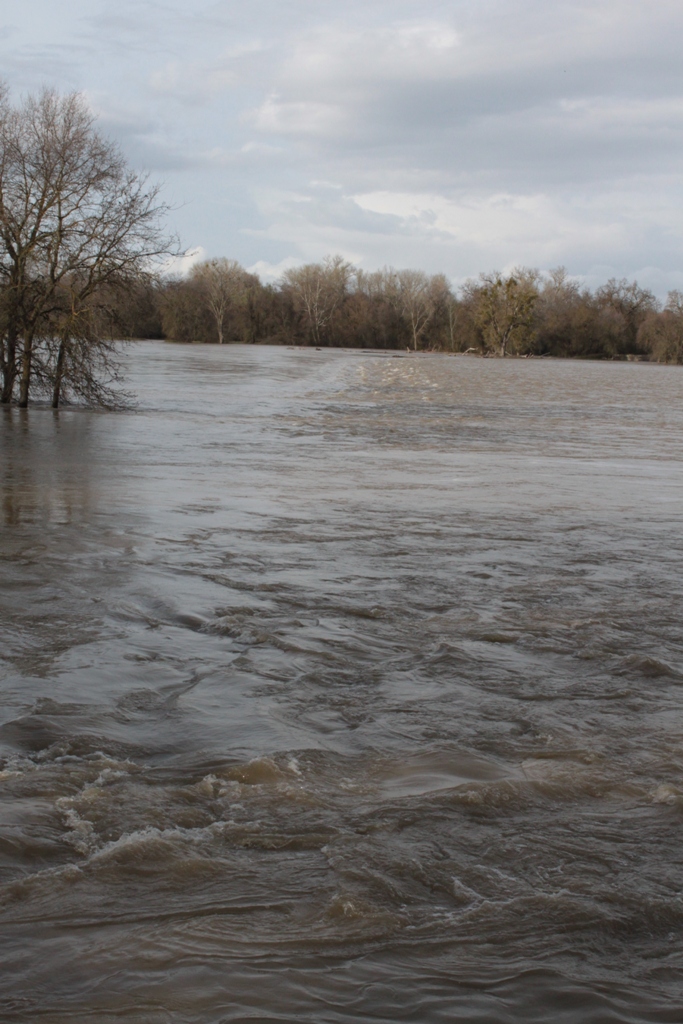 Here is the Yolo Bypass in flooded conditions – it’s the big body of water in the upper part of the picture; the Sacramento River is that little windy river down towards to bottom, so as you can see, the Yolo Bypass routes a lot of water around the city of Sacramento. 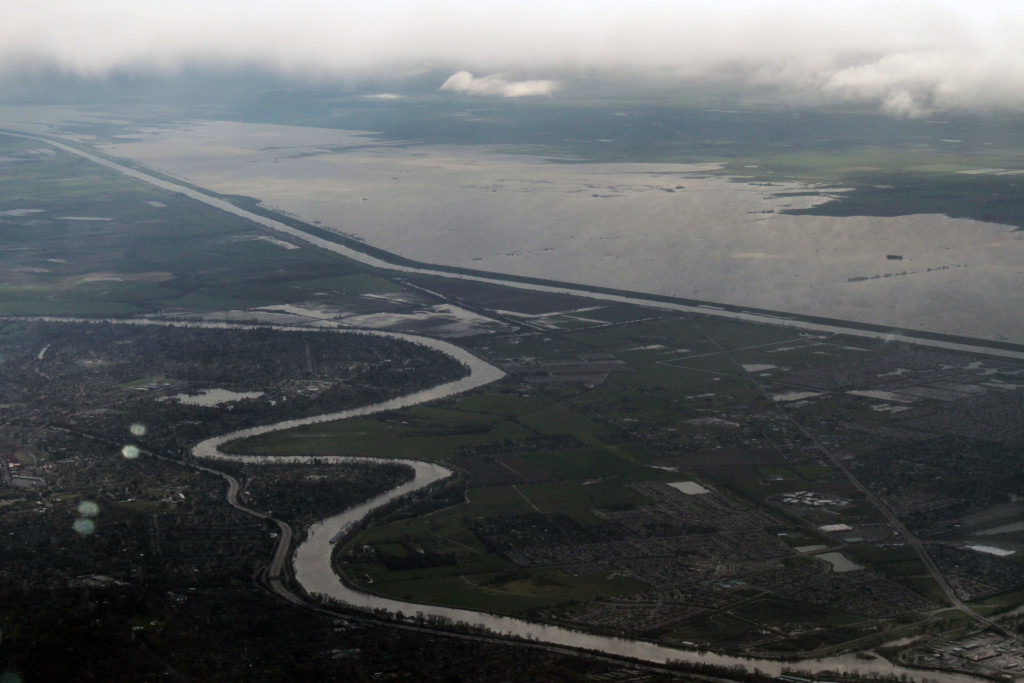 Here are the measuring sticks in dry times … 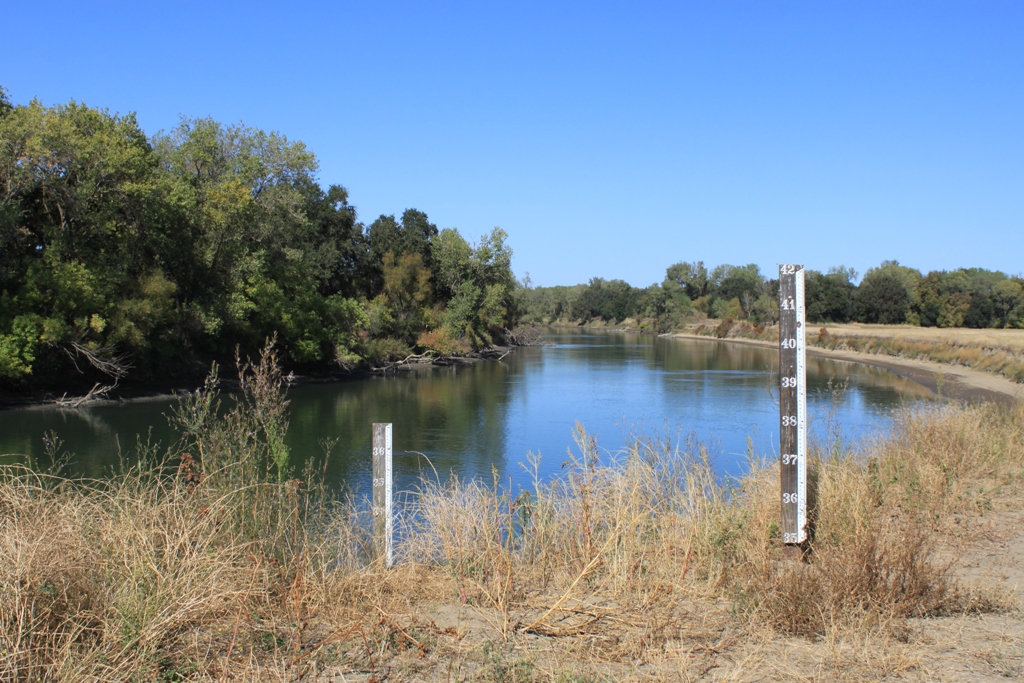 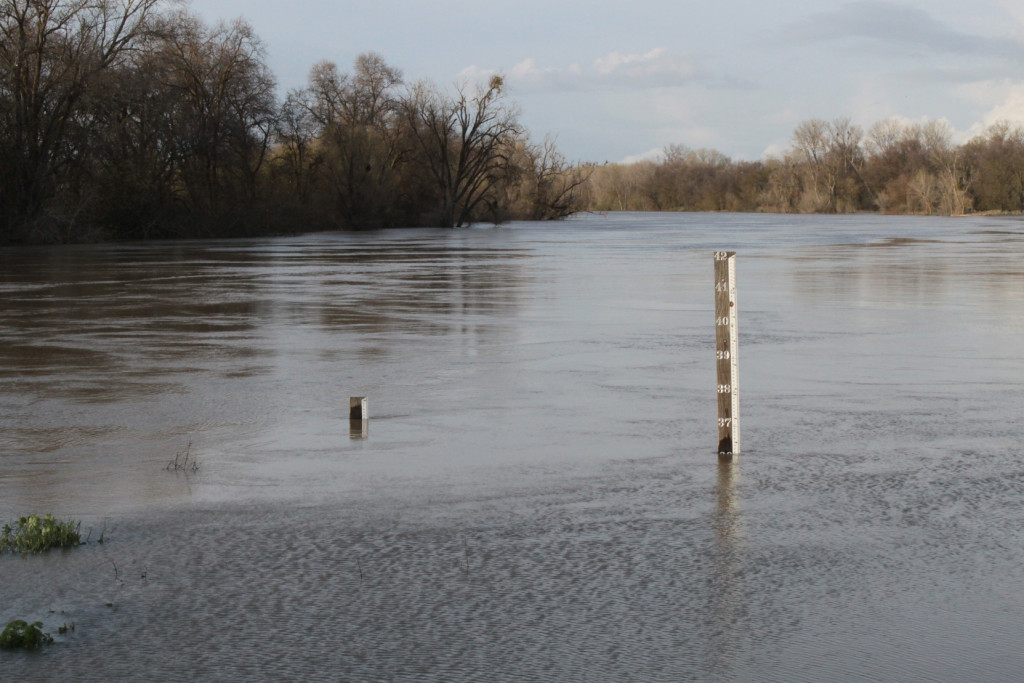 The weir itself is about 2 miles long. 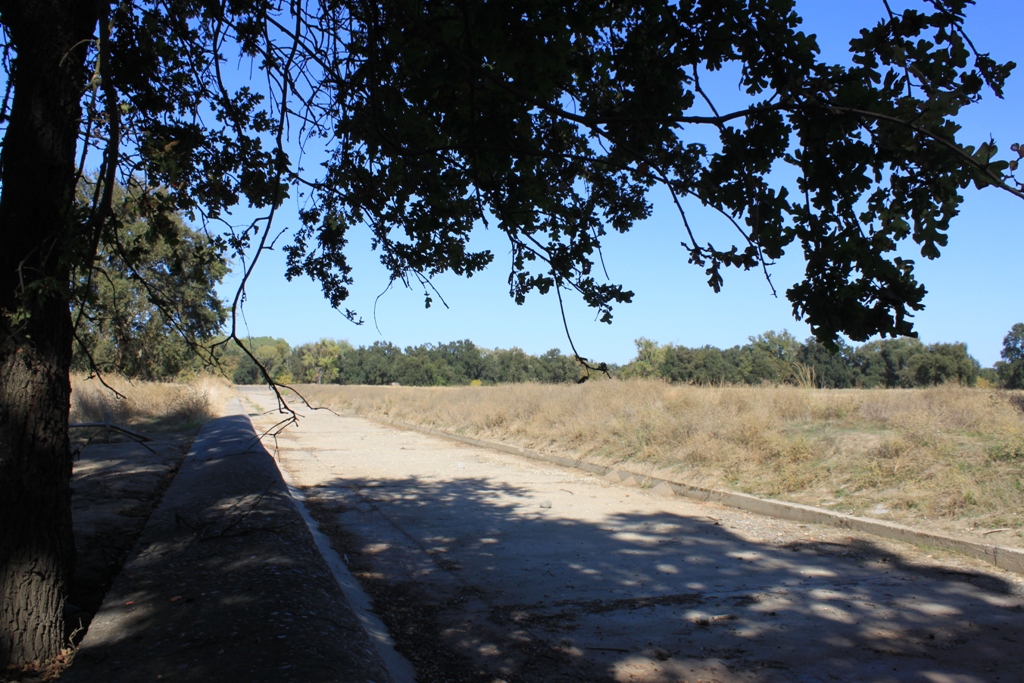 It is a wildlife area, so there is biking and hiking here during the drier times of the year. 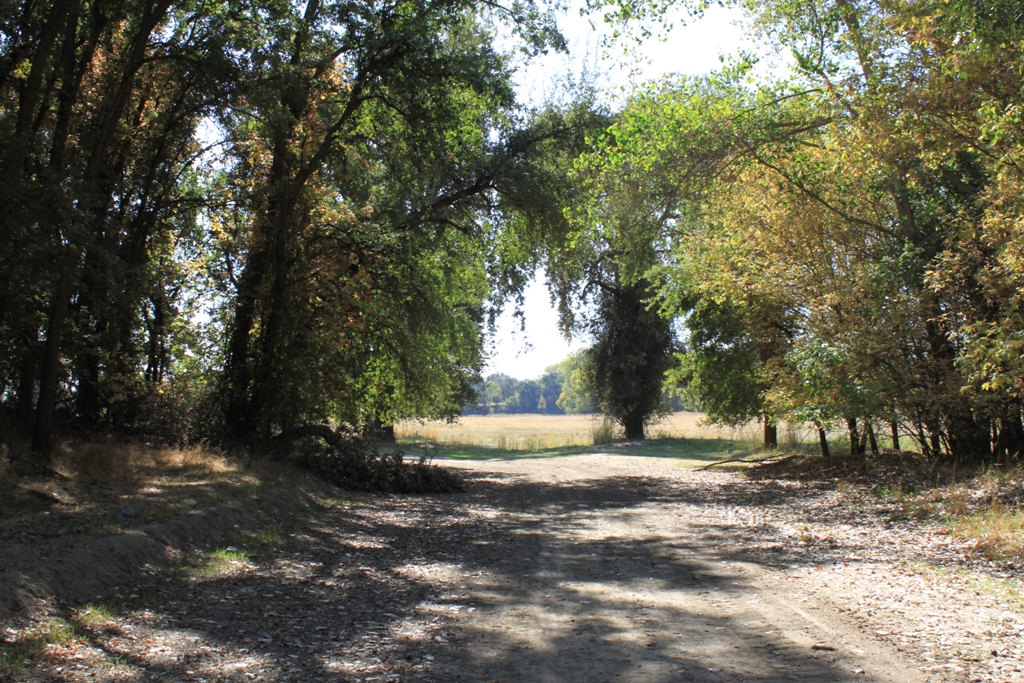 One of these days, I’ll visit from the west side, and show you what I find there.  For now, so long from the Fremont Weir!