On my recent trip to Sacramento (March 23 – 26, 2011), I had rented a car and had planned to spend a day traveling around and photographing the Sacramento San-Joaquin Delta, but the persistent rain and heavy flows in the rivers ruled that out. So instead, I took the chance to see how Sacramento’s flood control system is handling the deluge. 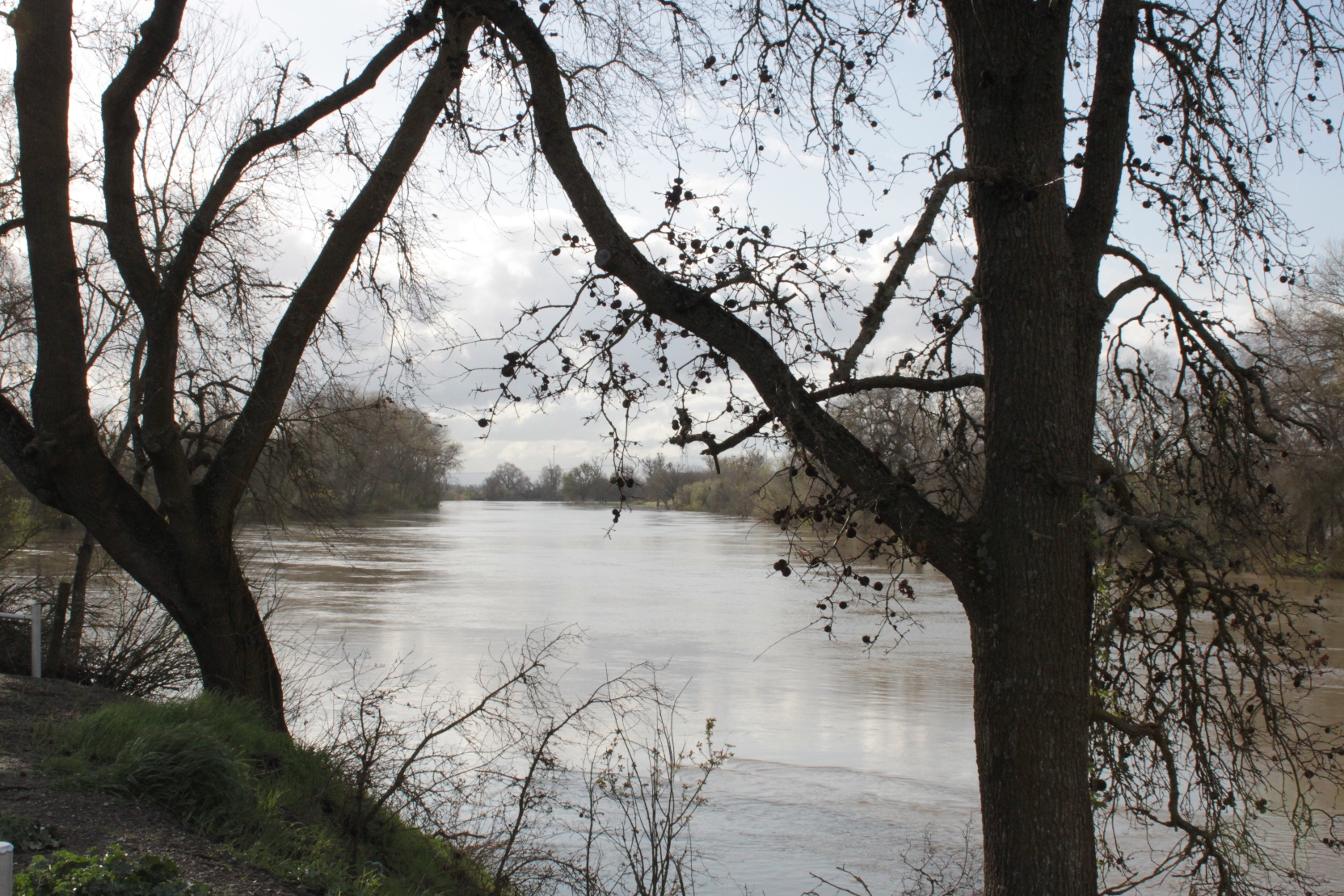 Sacramento has been described as “The most flood prone city not named New Orleans”. Sitting at the confluence of the Sacramento River and the American River, Sacramento has a well-documented history of flooding. Settlers soon learned that torrential storms and a melting snowpack would periodically rush down the river and it’s tributaries, causing it to overflow its banks.  The floodwaters would spread over hundreds of miles and millions of acres, creating a large inland sea that would take months to drain.

Efforts to control flooding in the Sacramento Valley began in the Gold Rush days, and continues today in an ongoing process called the Sacramento River Flood Control Project. The SRFCP consists of 980 miles of levees, plus overflow weirs, pumping plants and bypass channels that are designed to protect the communities and agricultural lands of the Sacramento Valley and the Delta. 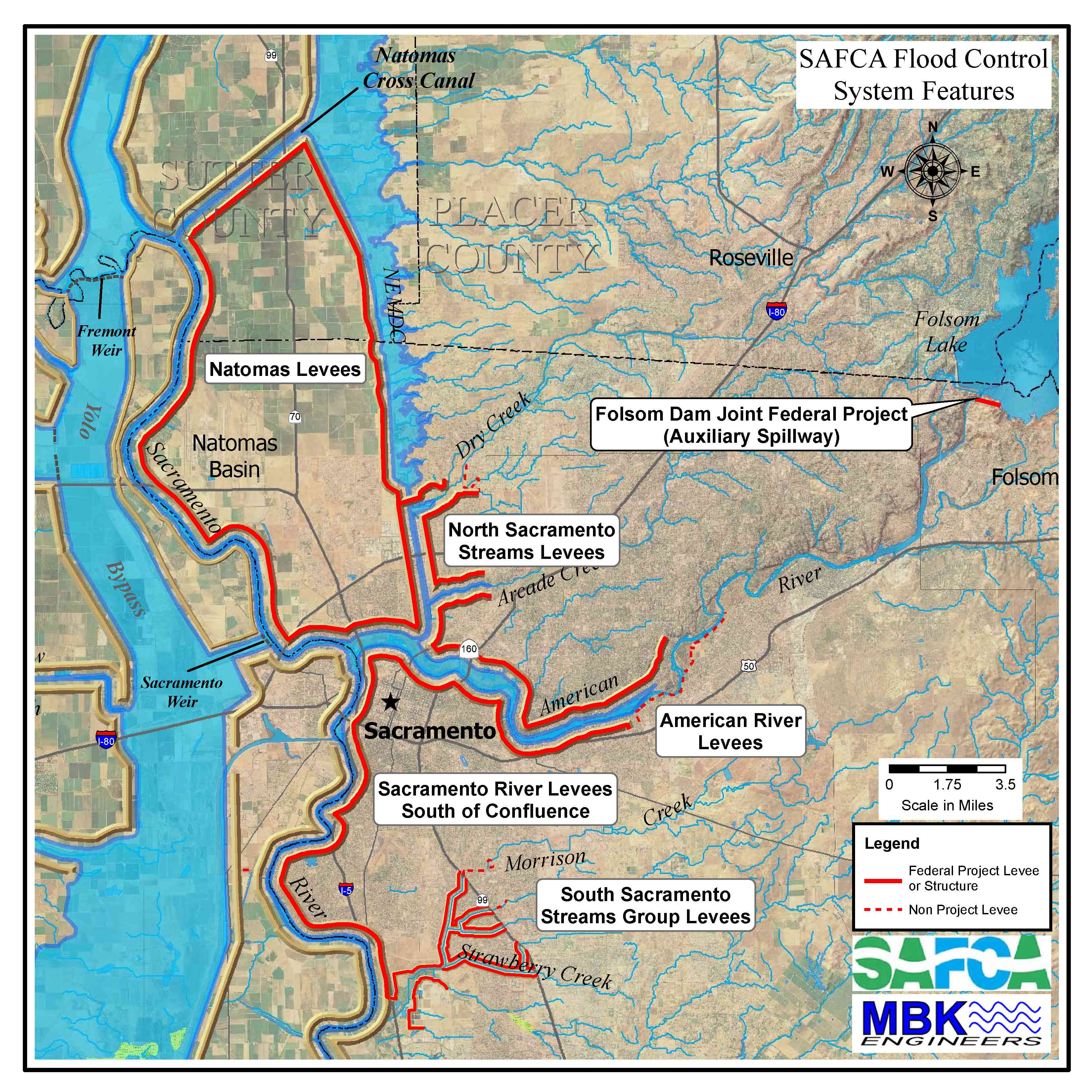 On my first day in Sacramento, I traveled out to the Fremont Weir, which is north of Sacramento, near the confluence of the Sacramento and Feather Rivers. 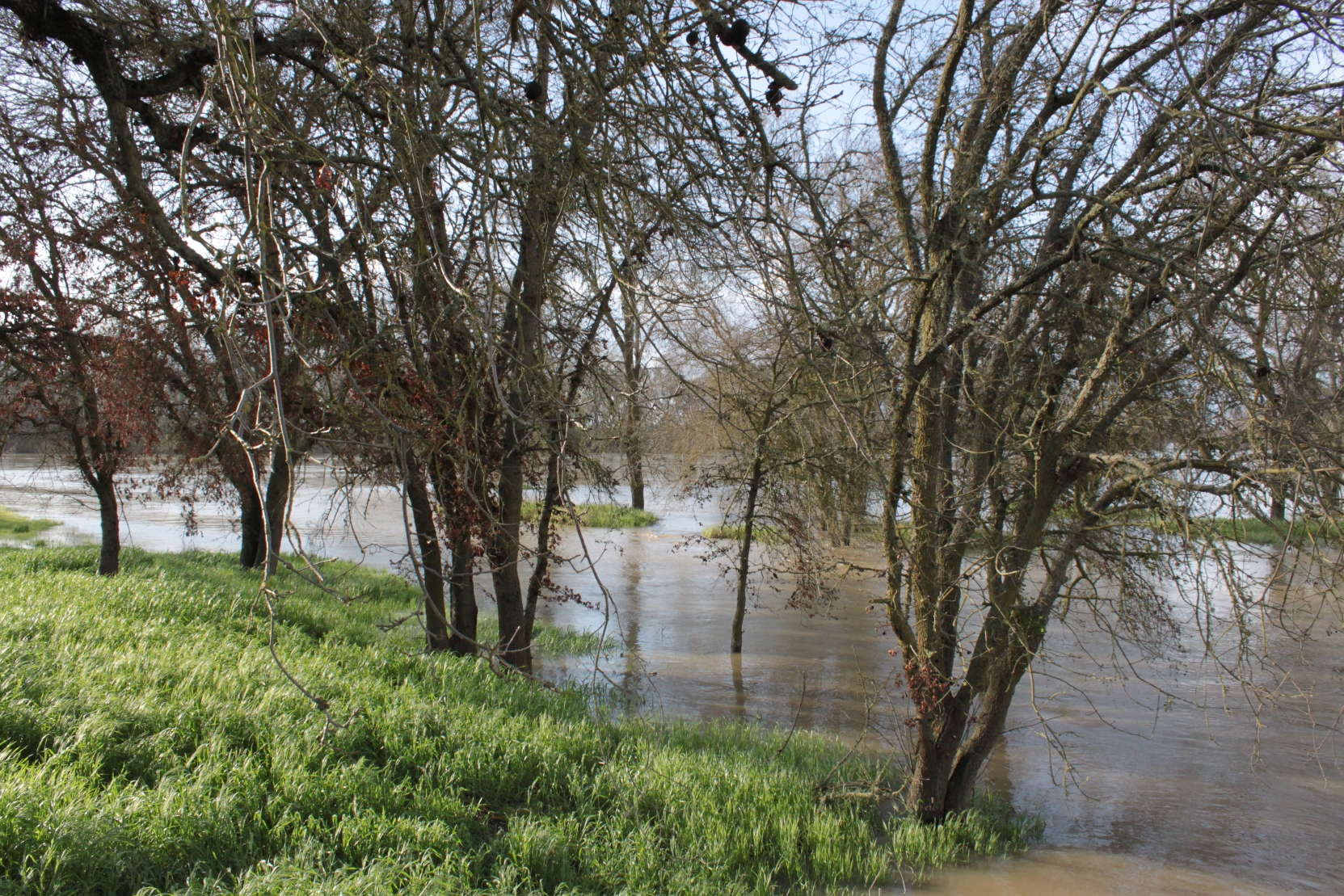 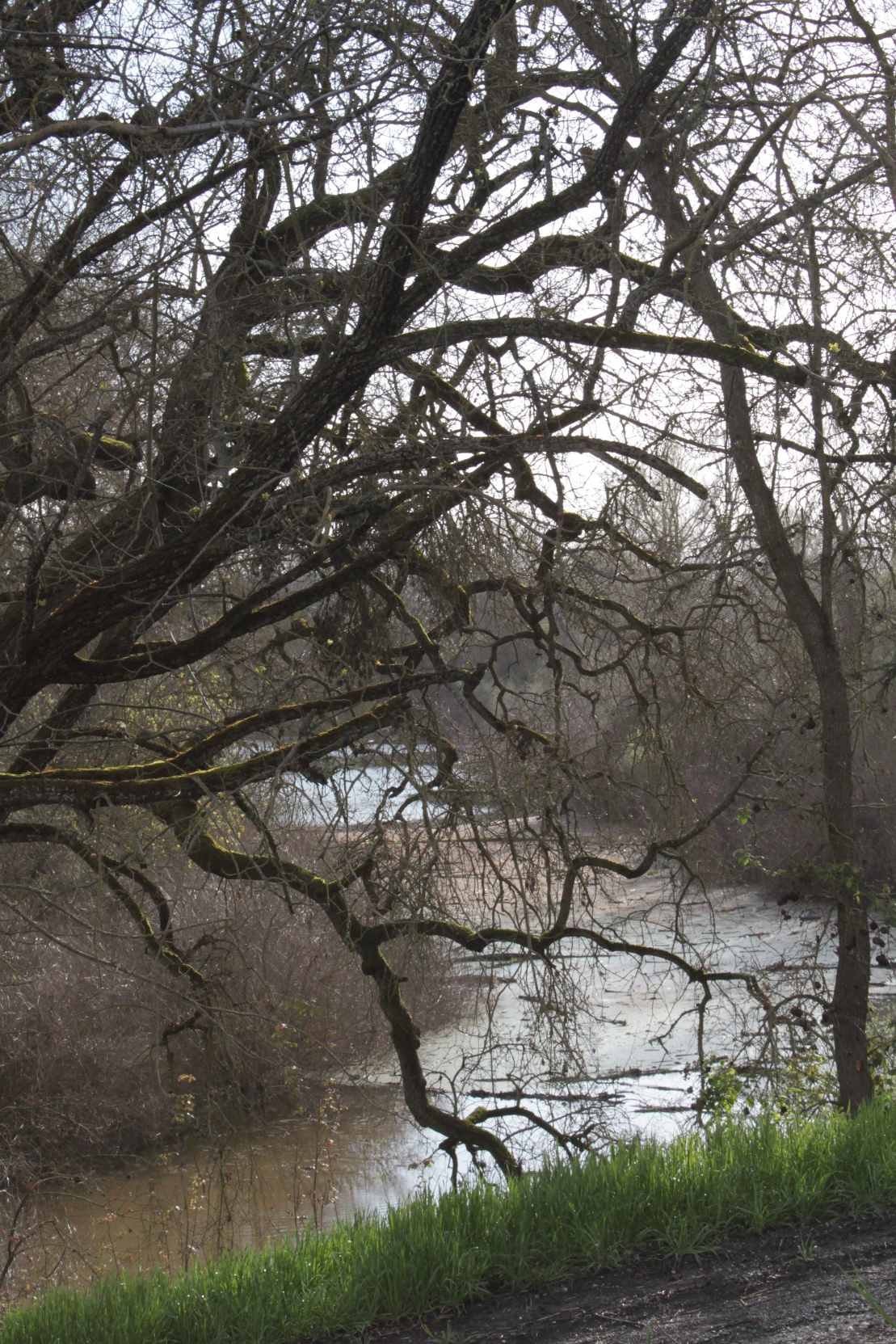 This is how the Fremont Weir usually looks when it is dry (picture by the USFWS, retrieved from flickr under Creative Commons): 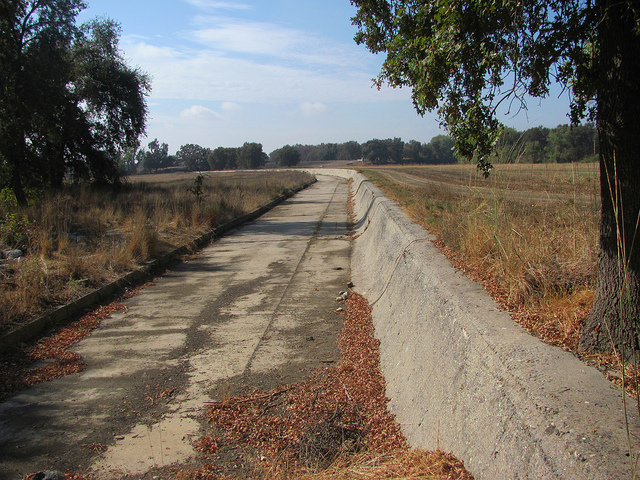 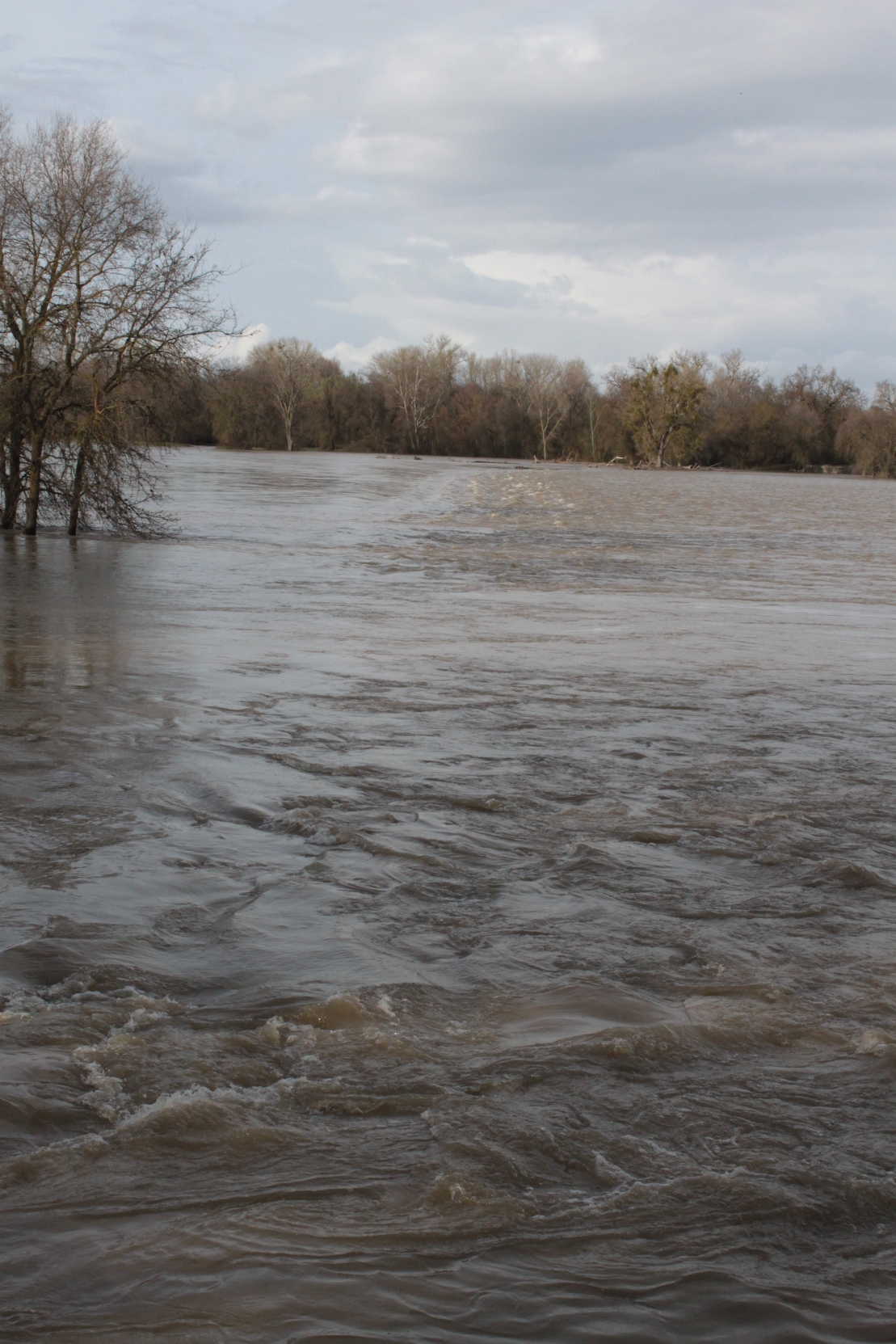 When the water reaches an elevation of 33.5 feet, it goes sliding over the Fremont Weir and heads down to the Yolo Bypass. On this day, the water was 36 feet deep in some places. 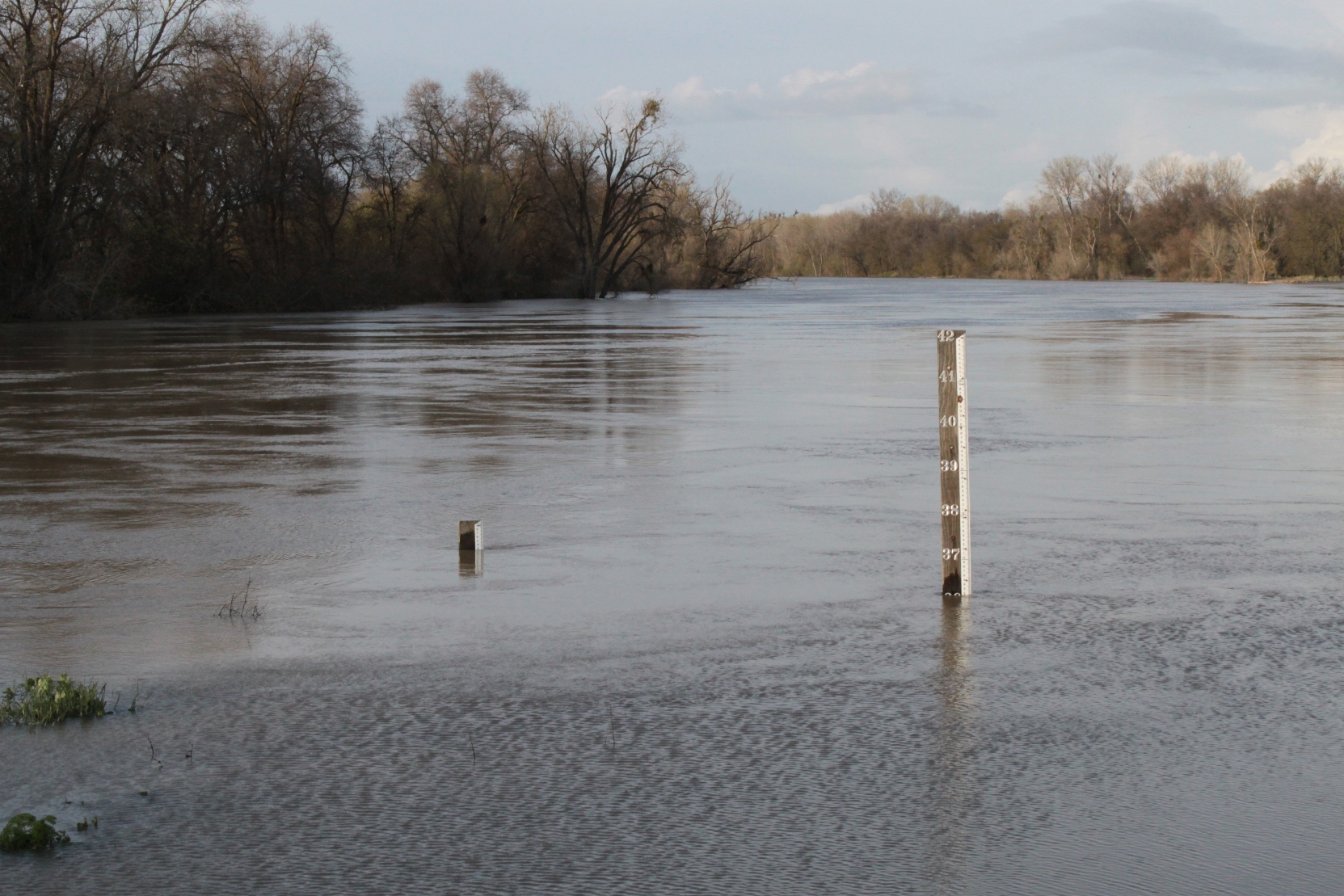 Downstream in the city of Sacramento, the high flows of the river are flooding parks … 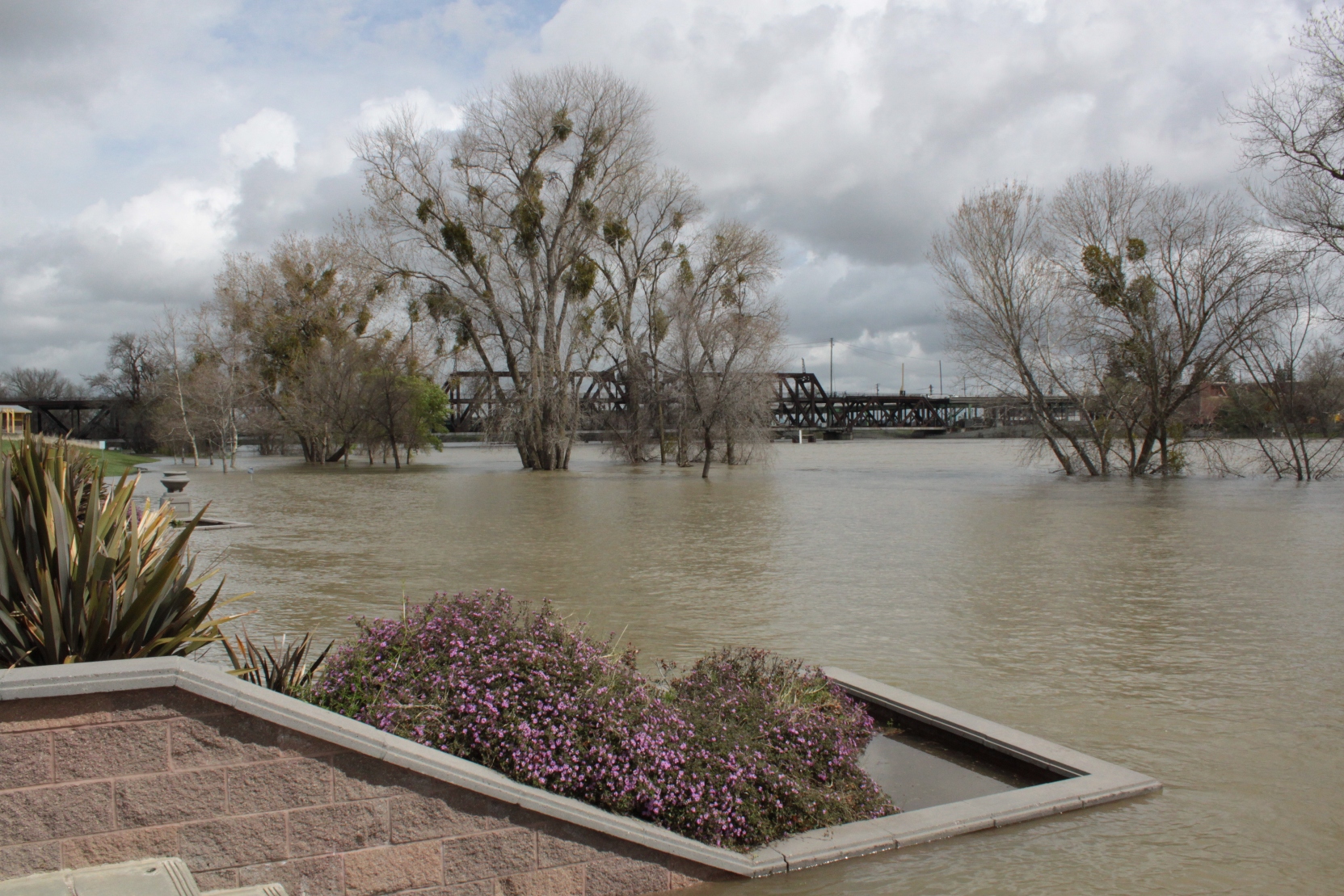 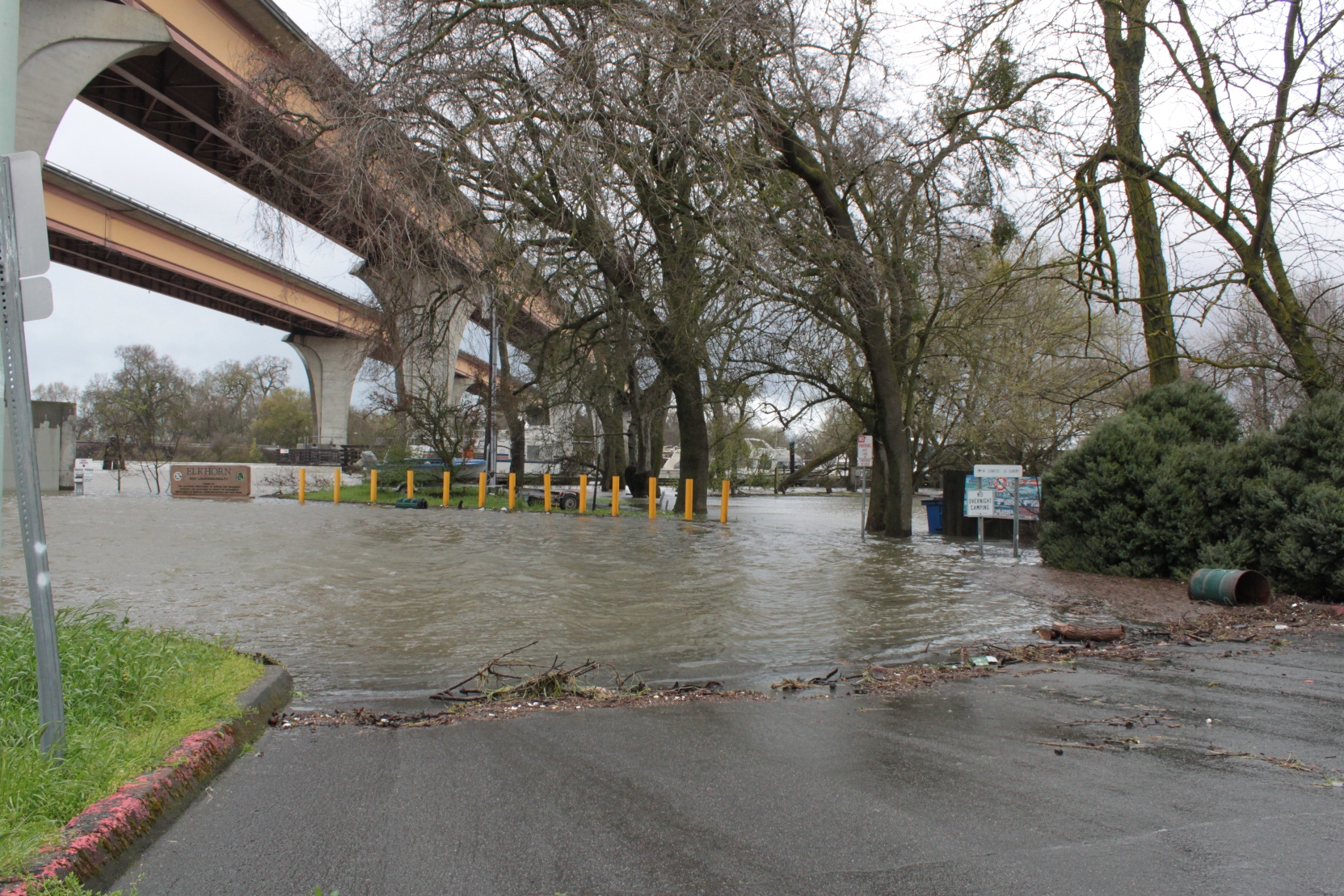 And homes built on the inside of the levees along the river have flooded backyards and water lapping at their foundations, although most clearly are built with flooding in mind. 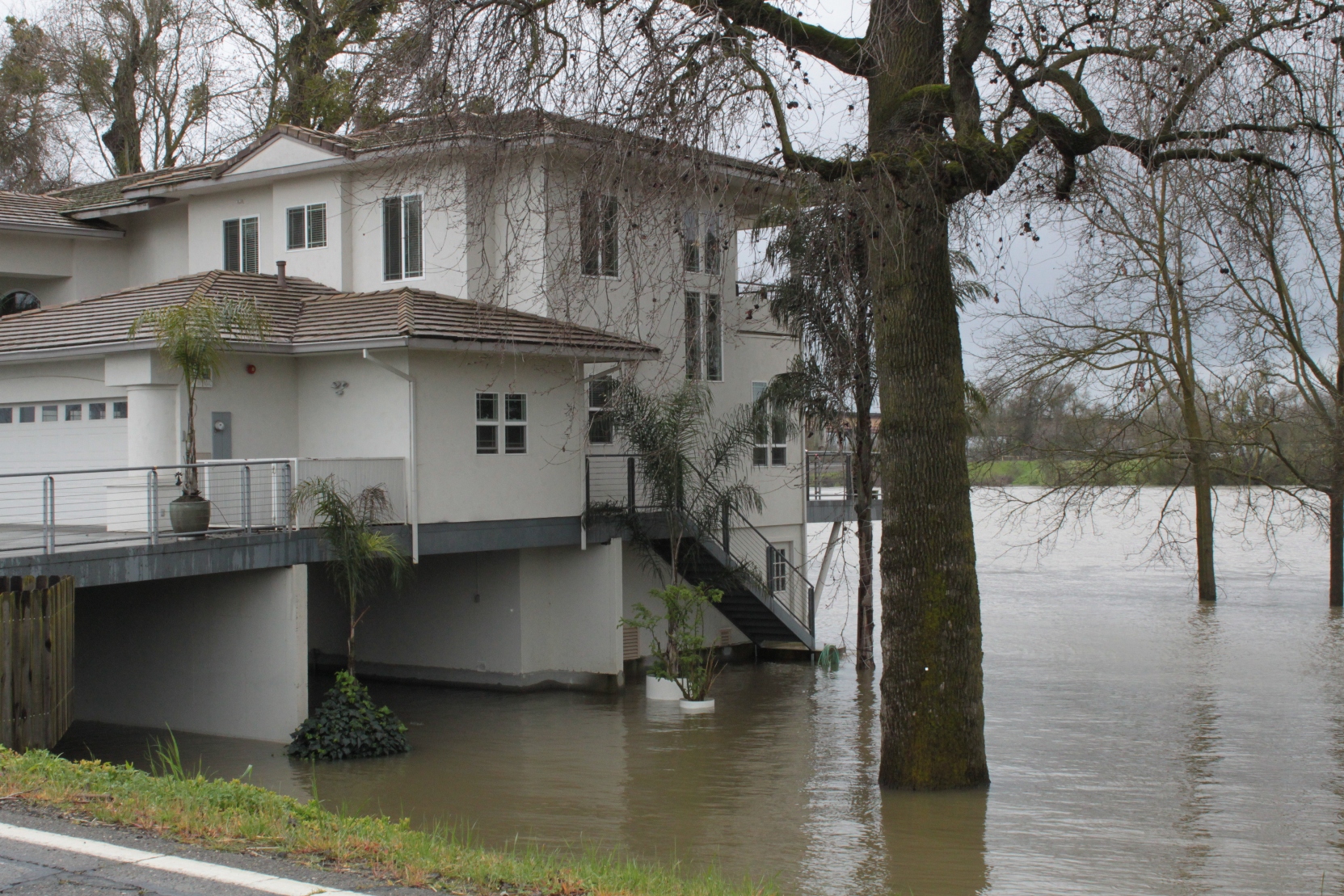 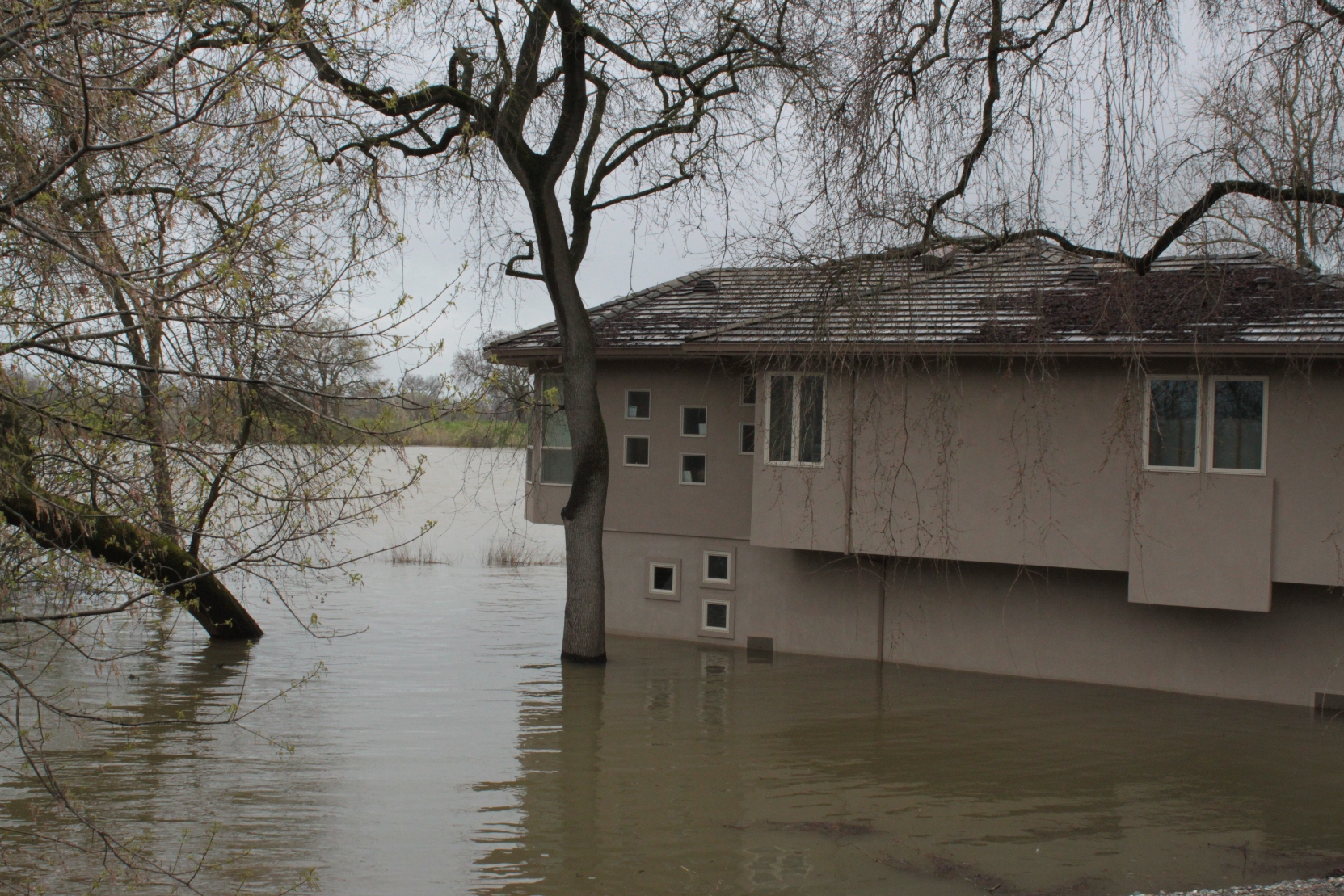 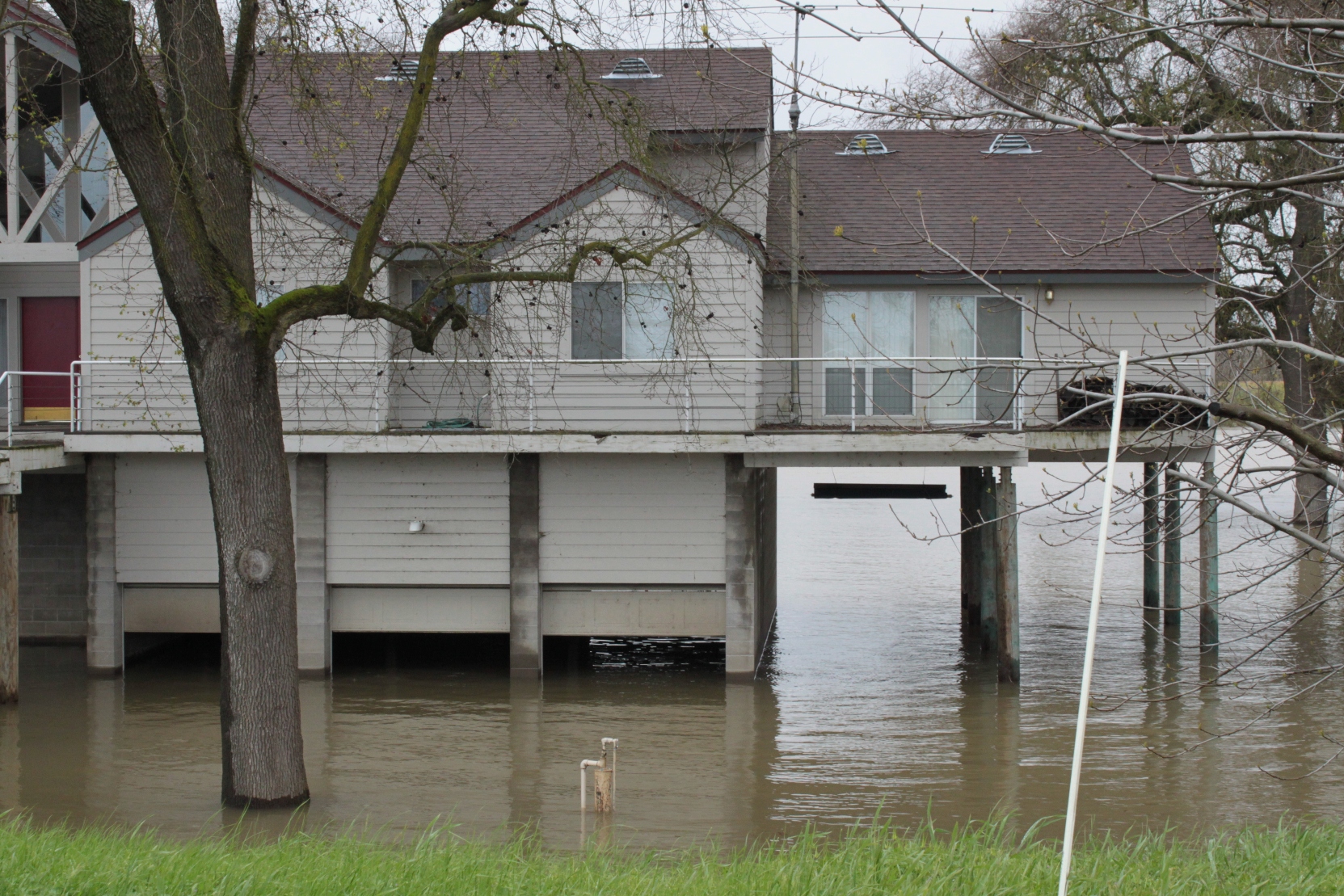 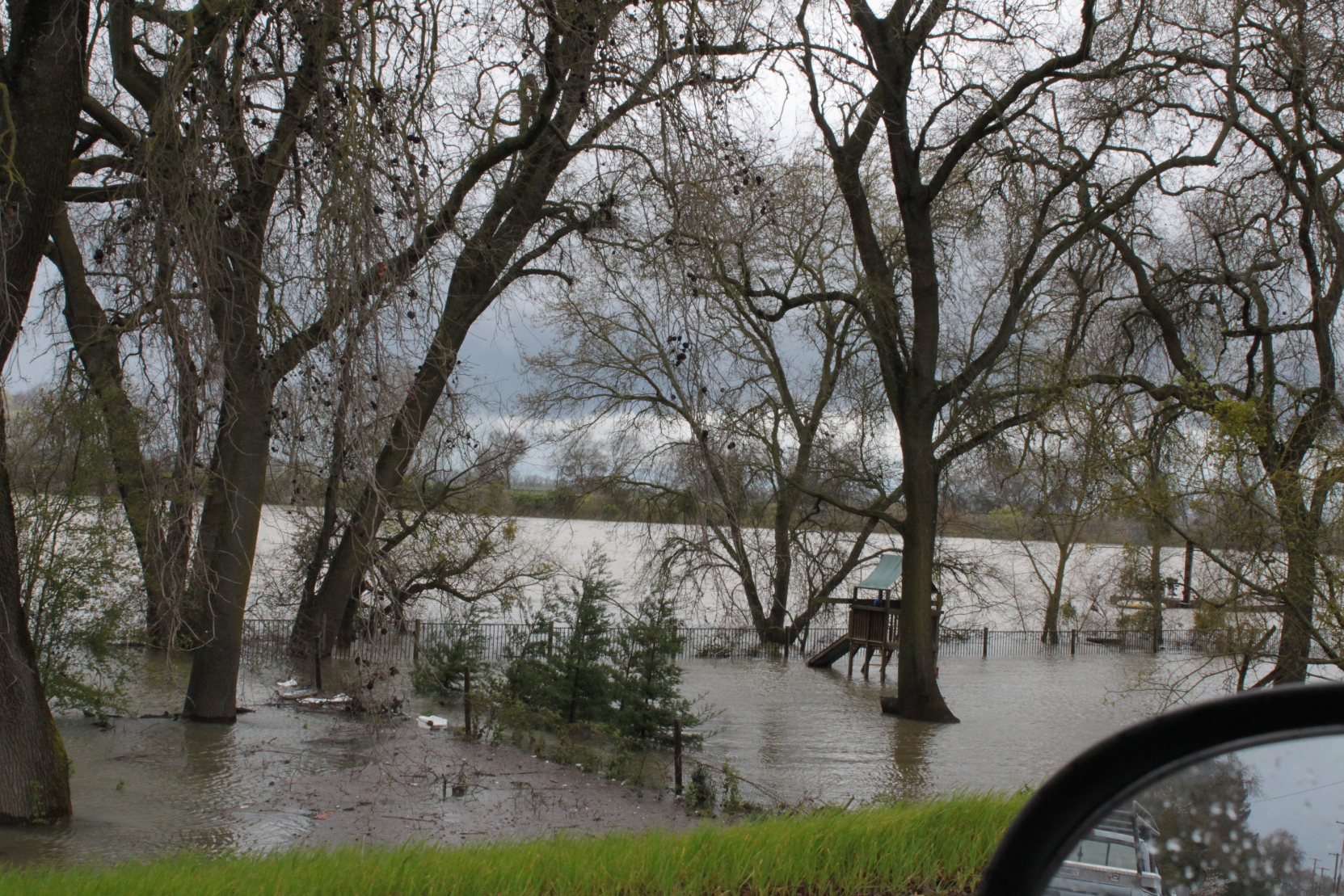 All this water flows into the Yolo Bypass, which serves as the diversion channel for the Sacramento River. 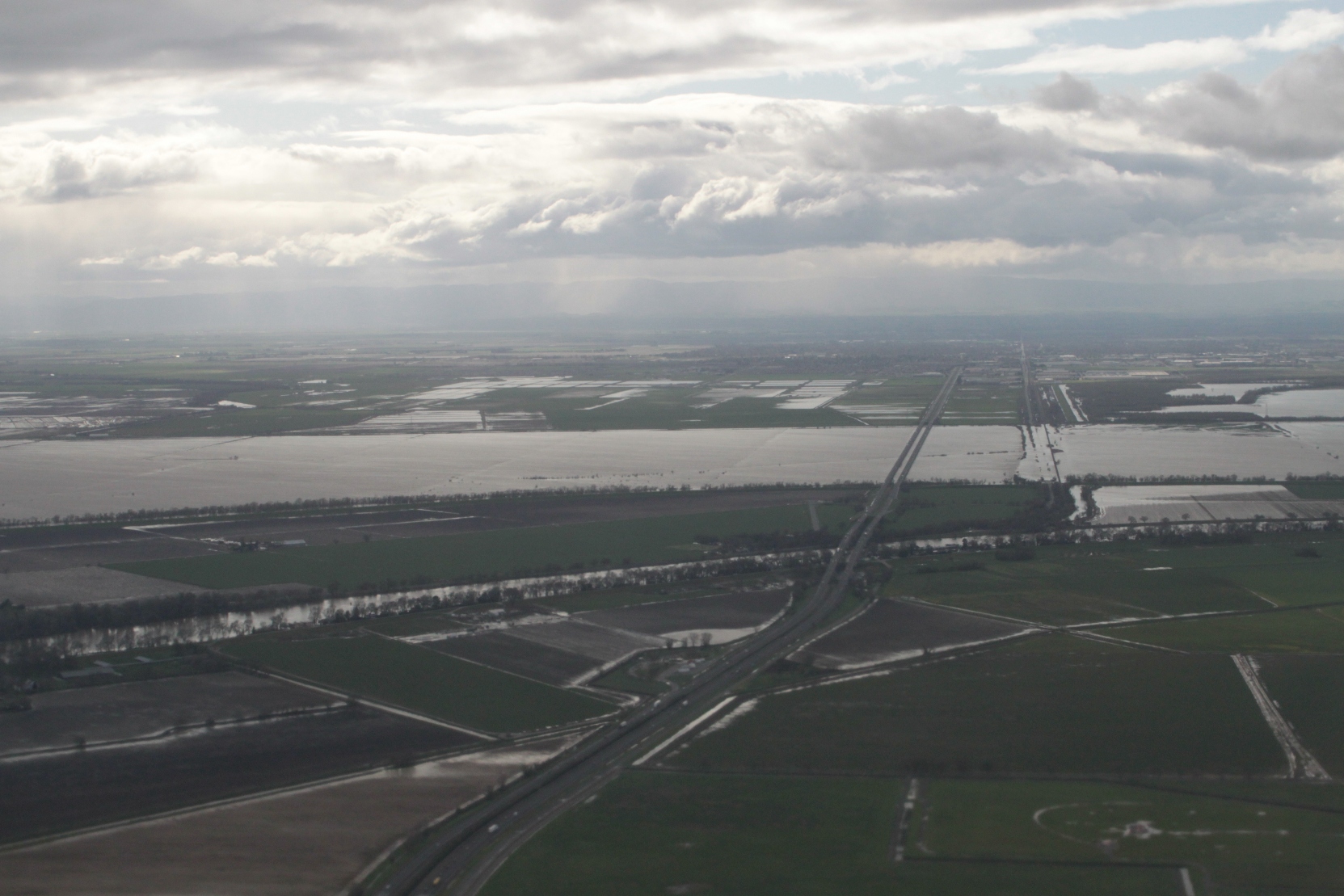 In the picture below, the Sacramento River channel is in the foreground; the Yolo Bypass is in the distance.  The water in the bypass is considerably more than the river channel, which gives you an idea of the amount of devastation that would be occurring if the bypass wasn’t there. 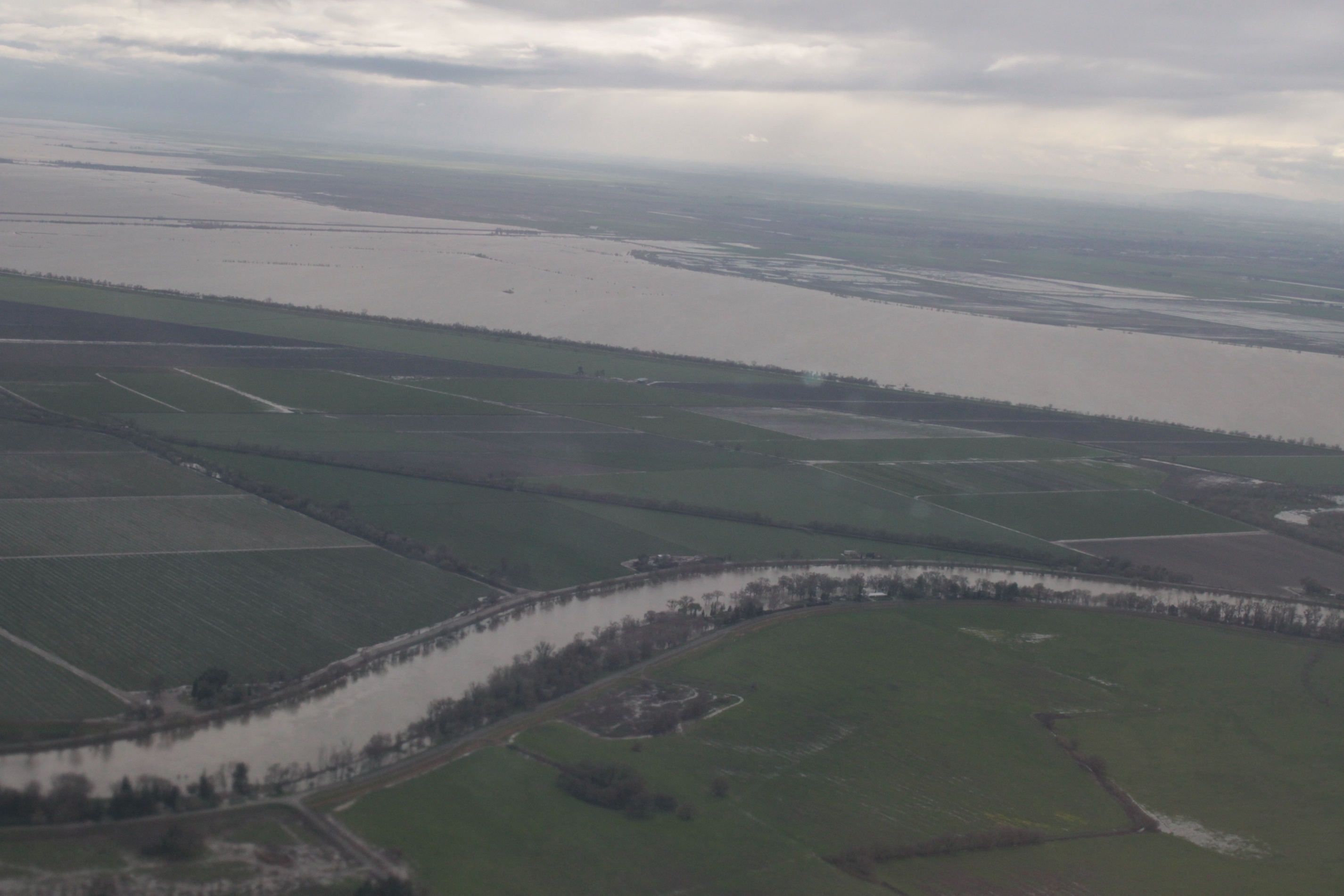 During the winter months, weirs in the levee systems along the river and creeks are opened periodically to release water into the Yolo Bypass to protect communities and ag lands from being flooded. 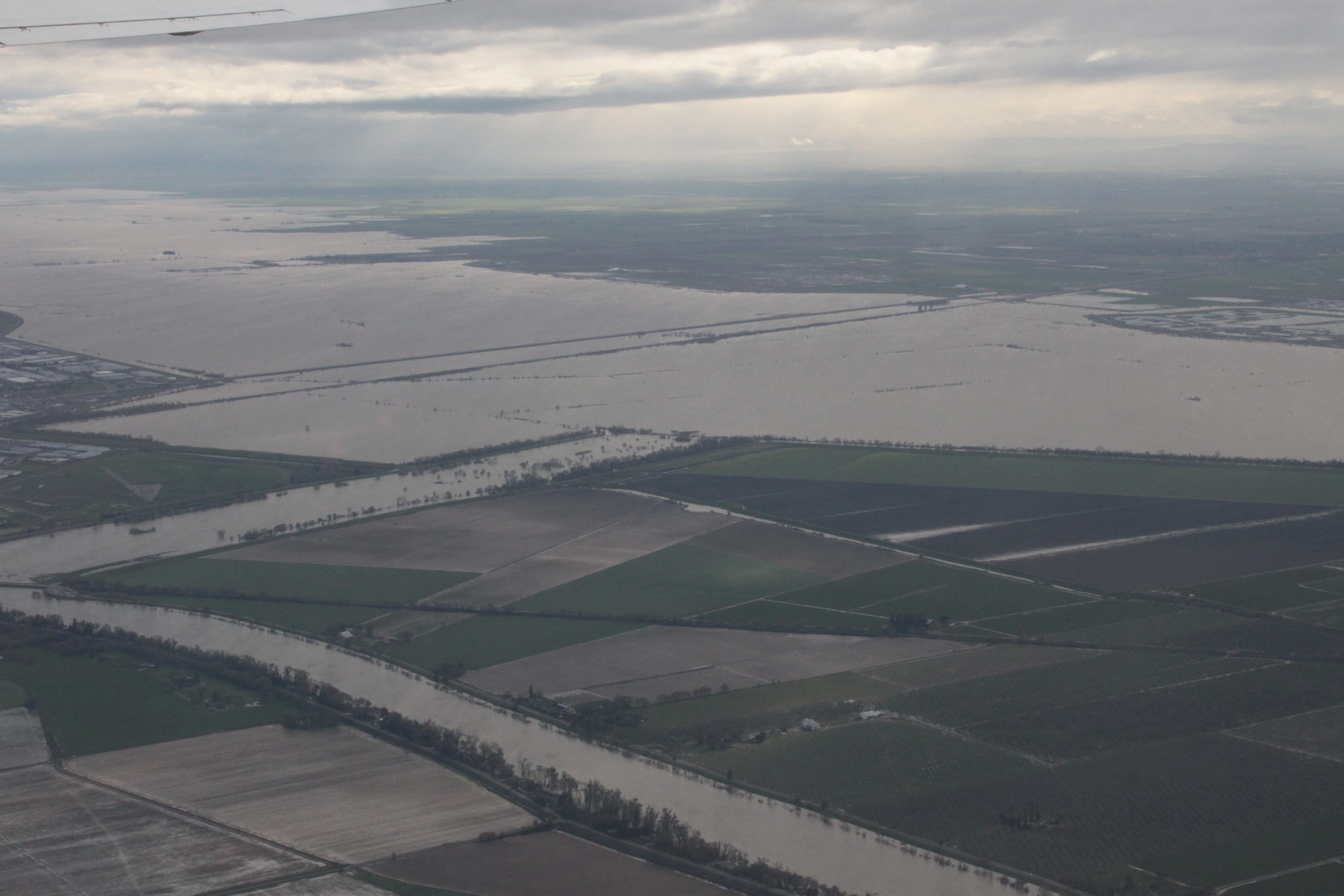 During the summer and fall months, the Yolo Bypass lands are farmed, and during the flood season, the land provides valuable wetlands and supports a significant waterfowl population.

There’s a lot of water flowing down the Sacramento River, but so far it is within the capacity of Sacramento’s flood control system to handle it.  At least this time. 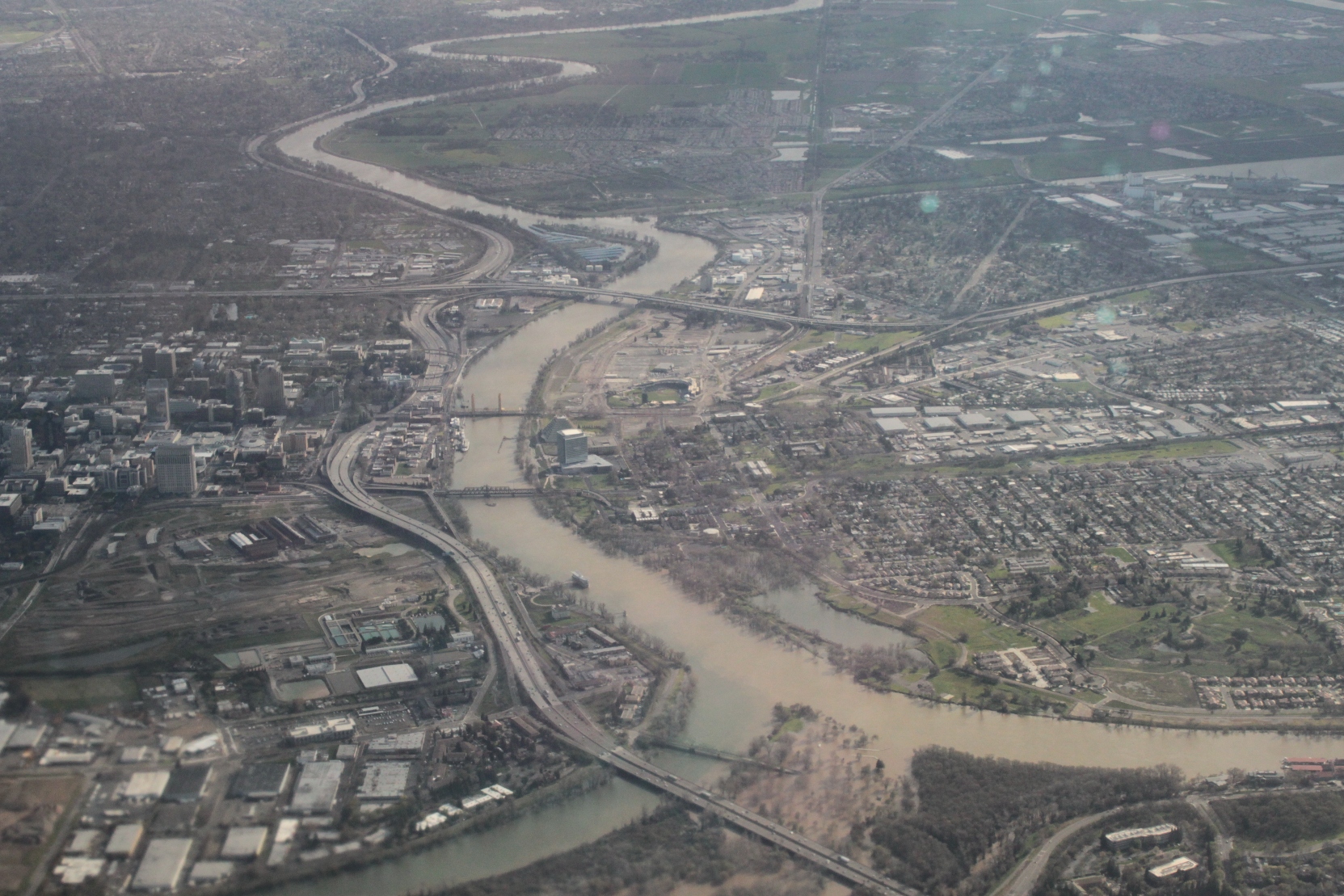 7 thoughts on “Sacramento’s flood control system: Under pressure but holding up”