If you’ve been wondering where I’ve been these last few weeks, I have been working very hard on my next rather big photo documentary slideshow on the Owens Lake dust control project, so this photoblog post is a sneak-preview of coming attractions.  The Los Angeles Department of Water and Power has spent over a billion dollars so far on cleaning up the mess here, and they call it the largest undertaking of its kind in the world. So what do you get for a billion bucks in the middle of the desert? 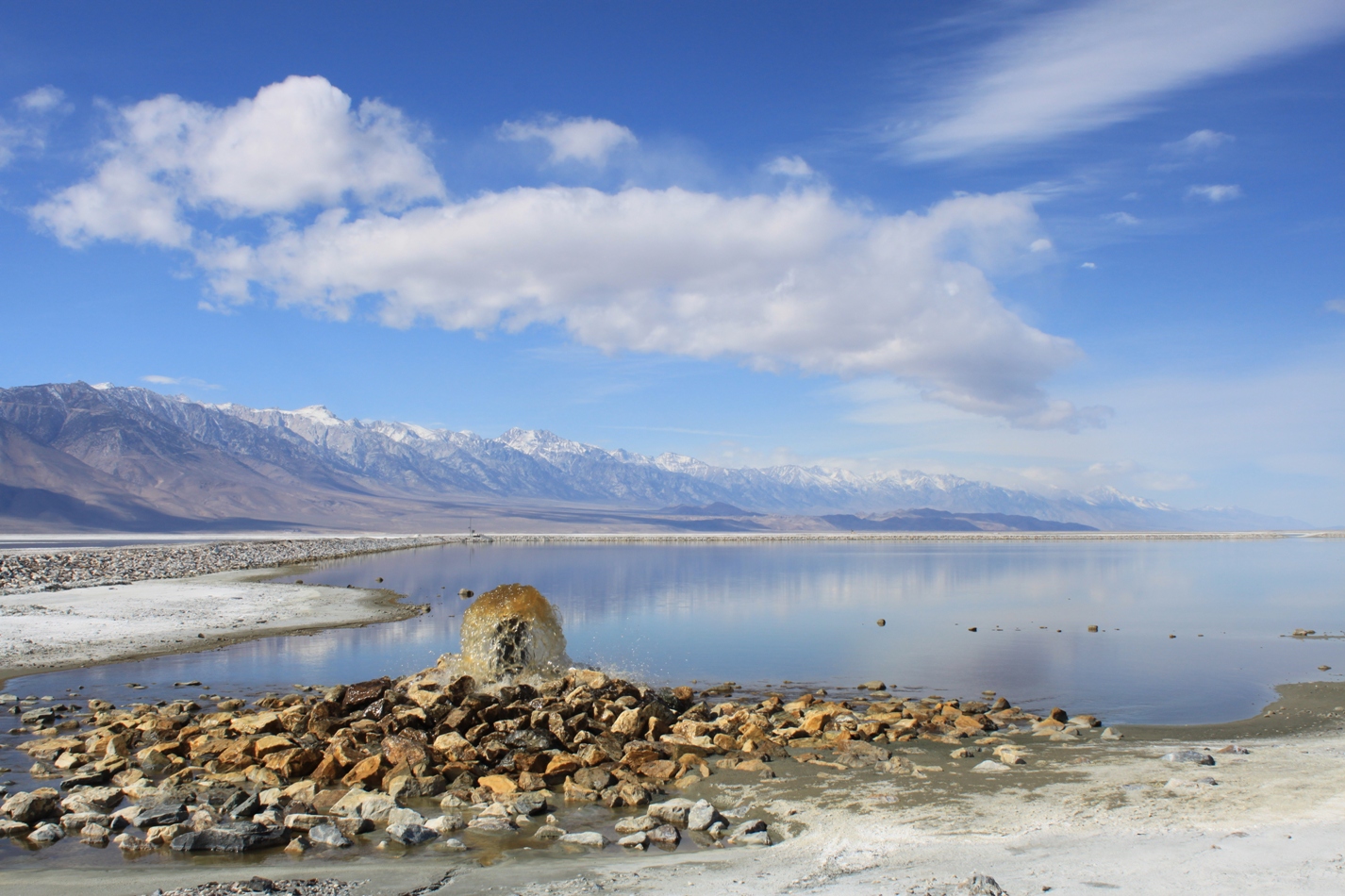 Well, before I can answer that, you need to understand what the problem was and how bad it had really gotten to be.

Back in 1913, the City of Los Angeles began diverting the Owens River to Los Angeles,.  It was the first big water project completed in California; others would soon follow. Owens Lake, once large enough to run steamer ships across it from the mines on the eastern shore of the lake, became a dry and dusty playa. It looked much like this on a good day (disclosure: this picture was taken after the start of dust control measures.  There was really much less water then than there is now, but this is the oldest one I have): 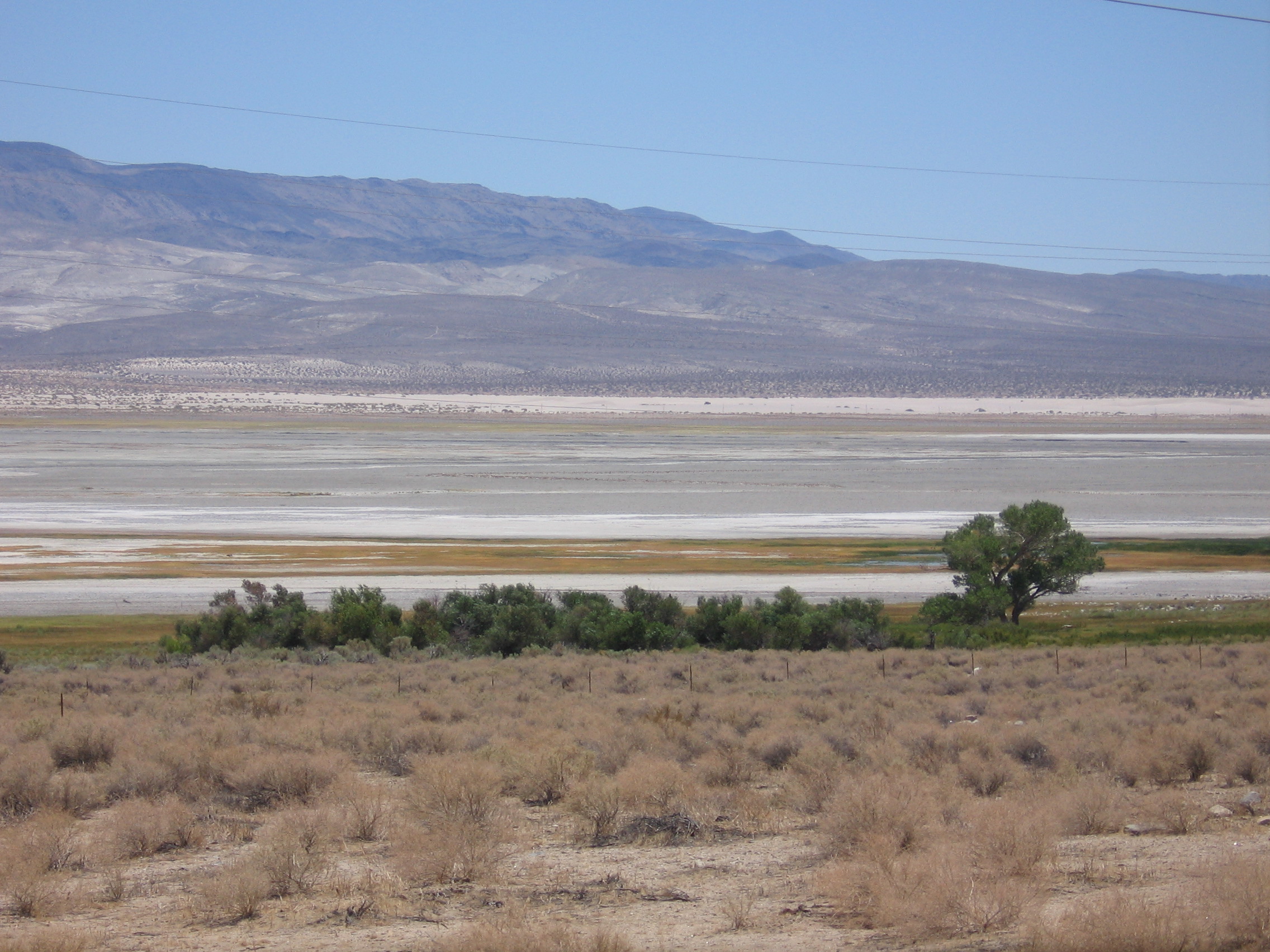 And this is Owens Lake on a bad day. The frequent winds in the fall and spring months can whip up the dust on the dry lake bed into a fury, sending it up as much as 10,000 feet up into the atmosphere. The dry Owens Lake bed was the largest source of dust emissions in the United States prior to application of dust control measures. This is from a dust storm just a few years ago, so you can only imagine how bad the problem was before they tried to do anything. (Photo credit (below): B Russel/Great Basin Unified Air Protection Control District) 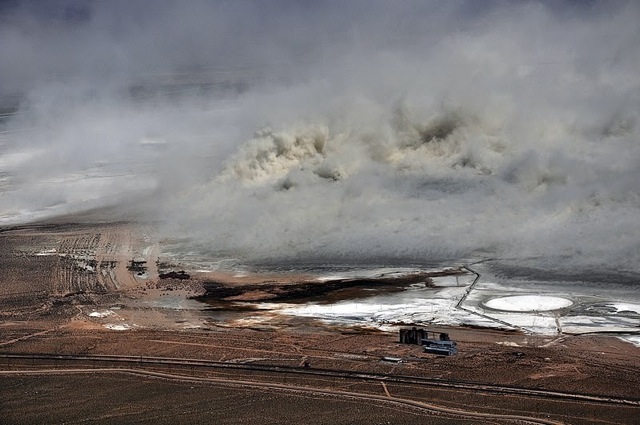 So since 2001, LA DWP has been working on controlling dust on the playa – playa means dried lake bed, by the way.  It’s a bit of a misnomer to refer to Owens Lake as a lake, because it’s definitely not and there are no serious plans to restore it to anything that might look like a lake.  Instead, this is a perpetually human managed environment. 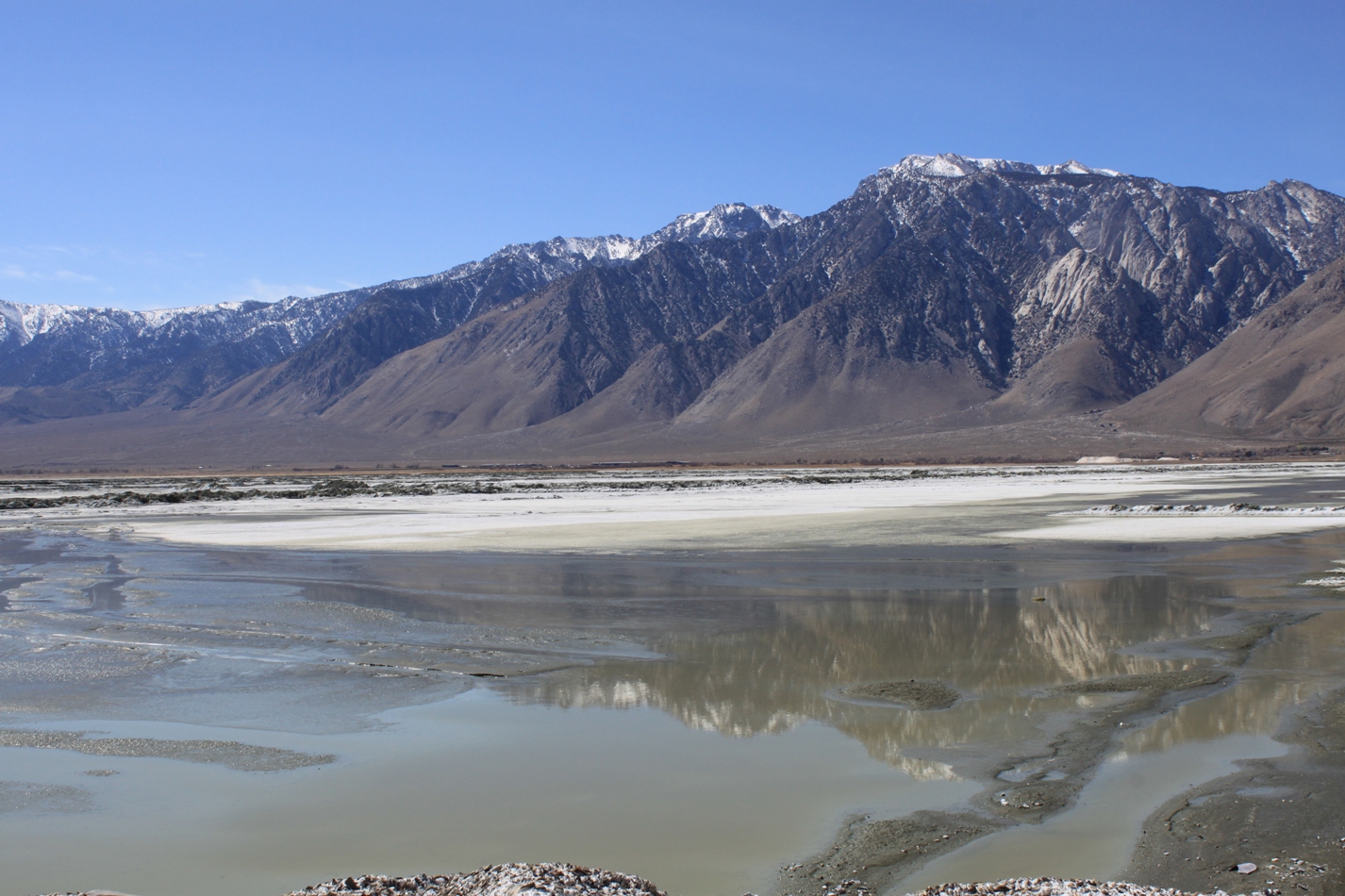 The playa is divided into cells; each cell (or area to be controlled) is surrounded by berms. A dirt road on a raised berm on the playa gives access to the project. I’m on a guided tour today with Nik from Great Basin Unified Air Pollution Control District. You could come here, too, if you wanted: the playa is owned by the State of California, so its public property. However, it’s really easy to get lost – there are roads branching off everywhere, most of them leading to other parts of the project, and none of them are marked – I think only two of them will take you off of the playa. It could be very easy to be lost, so if you go, be sure you take a full tank of gas. (And don’t try and cut across the lakebed; your car will likely sink.) To be honest, I don’t recommend it. 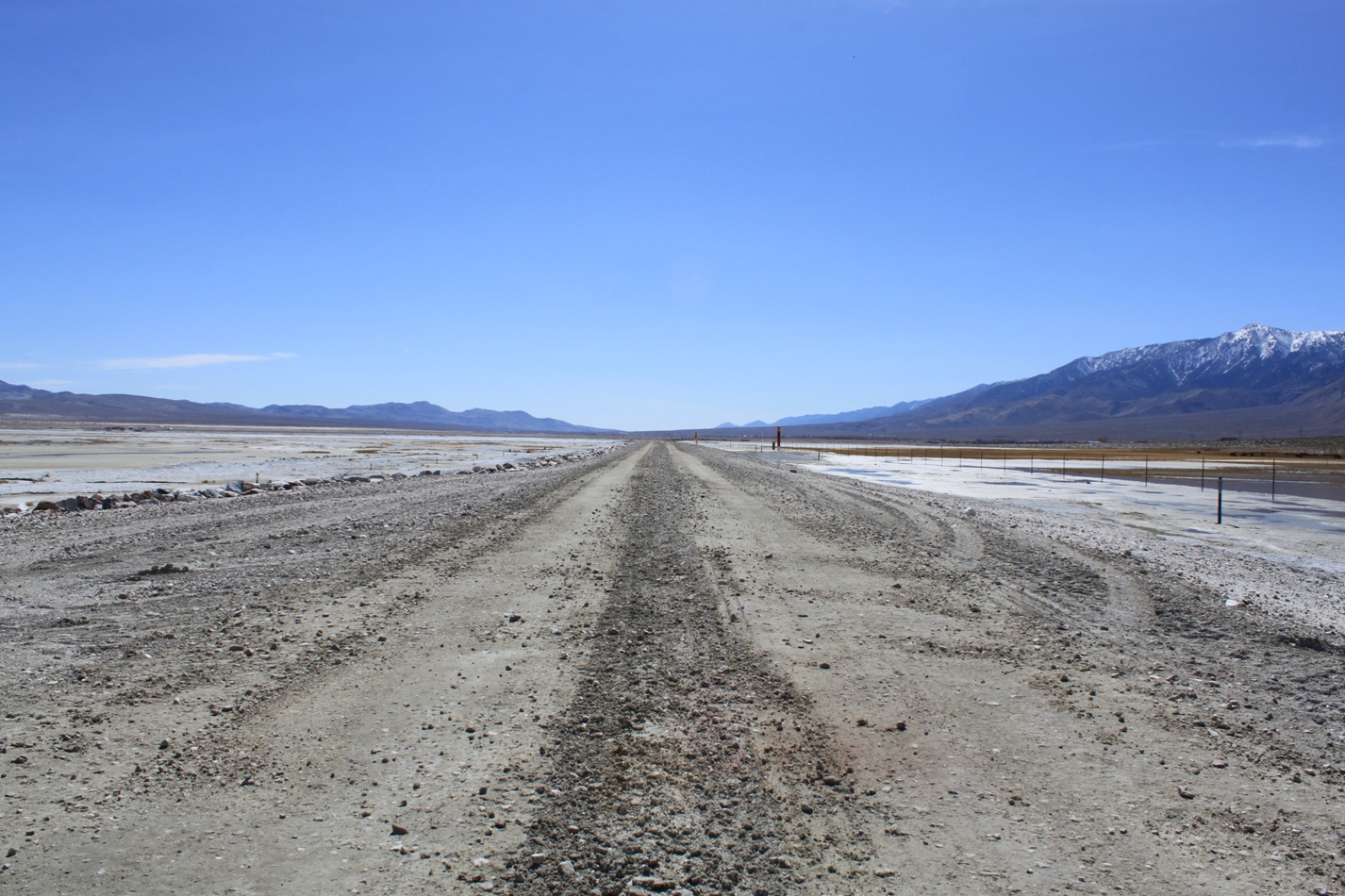 To manage dust, three measures have been identified that DWP is free to choose from.  They are shallow flooding, managed vegetation, and gravel blanket.  Most of the 40 square miles DWP is required to control are under shallow flooding.  It is the quickest and least expensive measure of the three.  Water is applied to the cell either by an array of emitters … 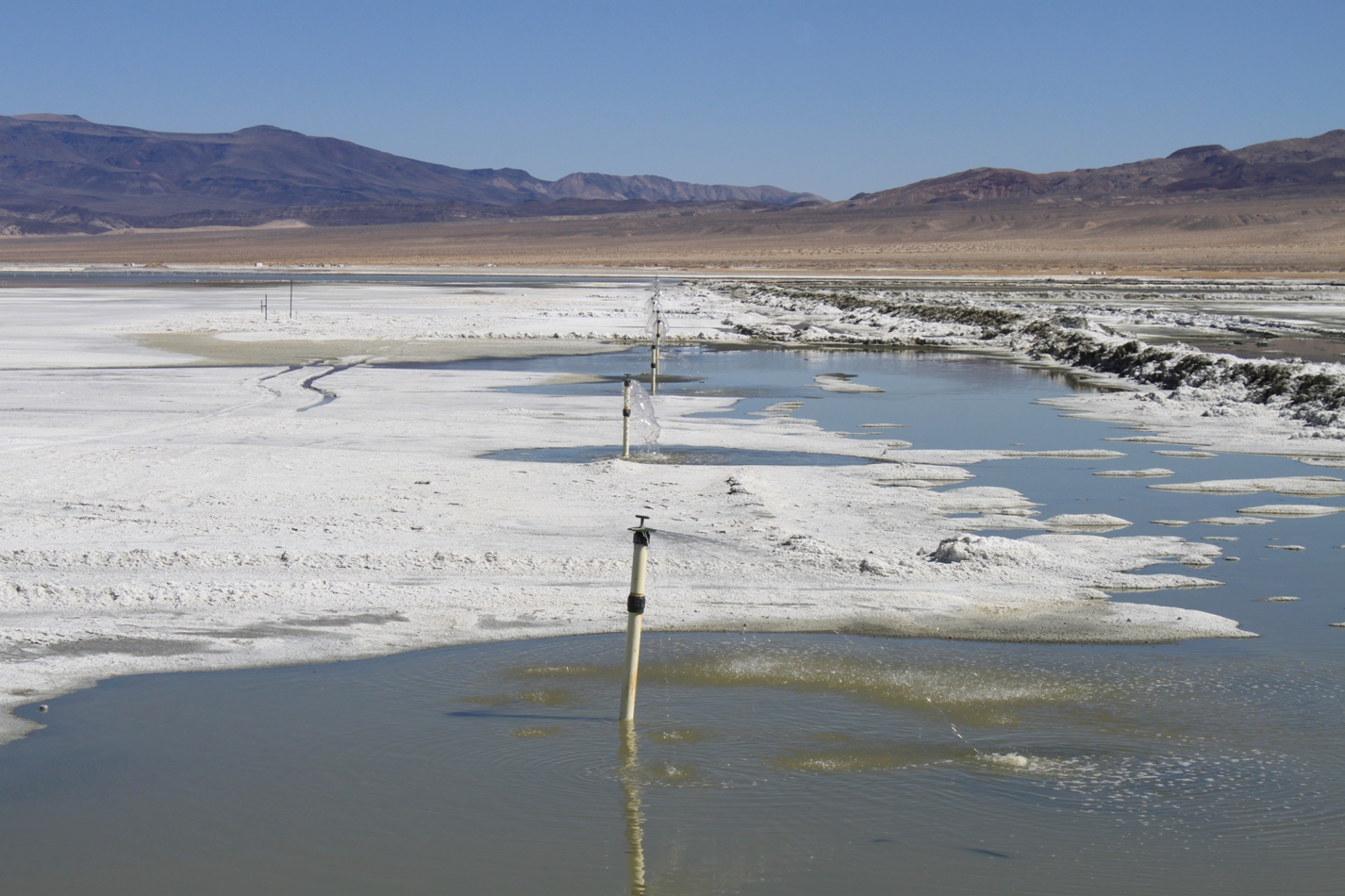 … or by a single outlet. 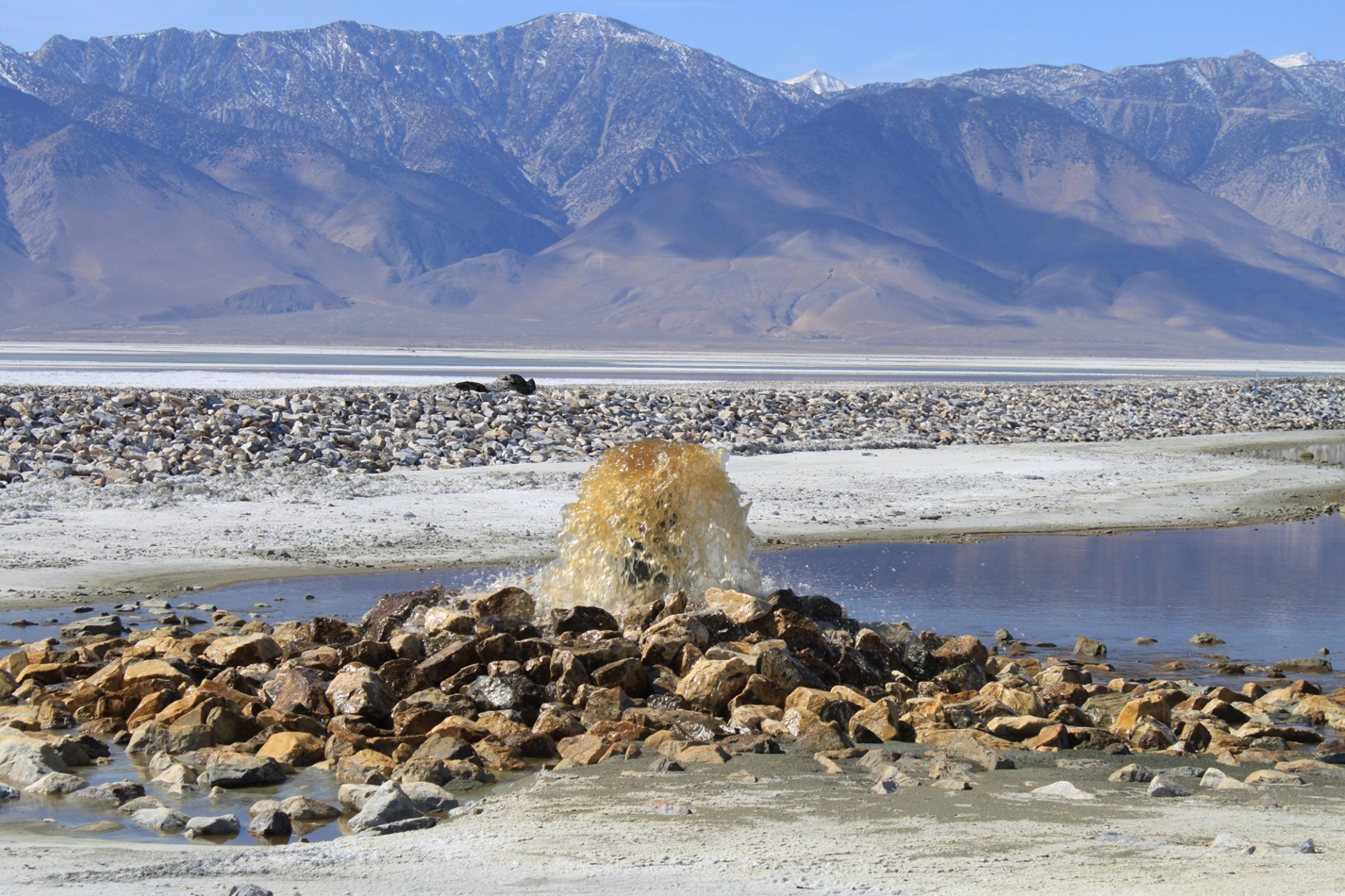 Water in the shallow flooding areas is only a few inches deep.  As it flows to the bottom of the cell, it is recirculated and reused. 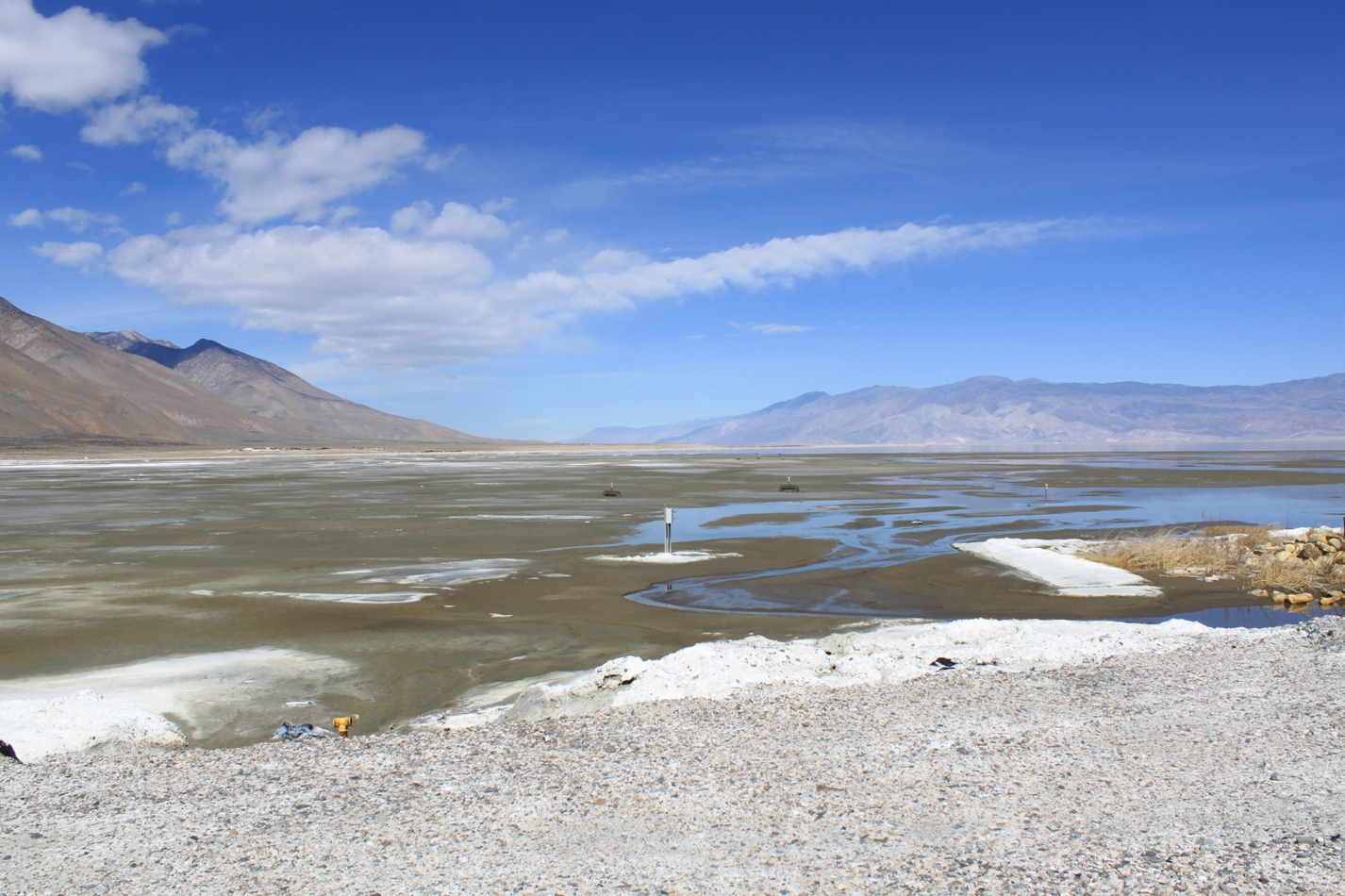 A variation of the shallow flood technique is the “deep water shallow flood” (no kidding – talk about an oxymoron!).  Here they fill up the water to a few feet deep and allow the water level to go down to a minimum before filling it up again. 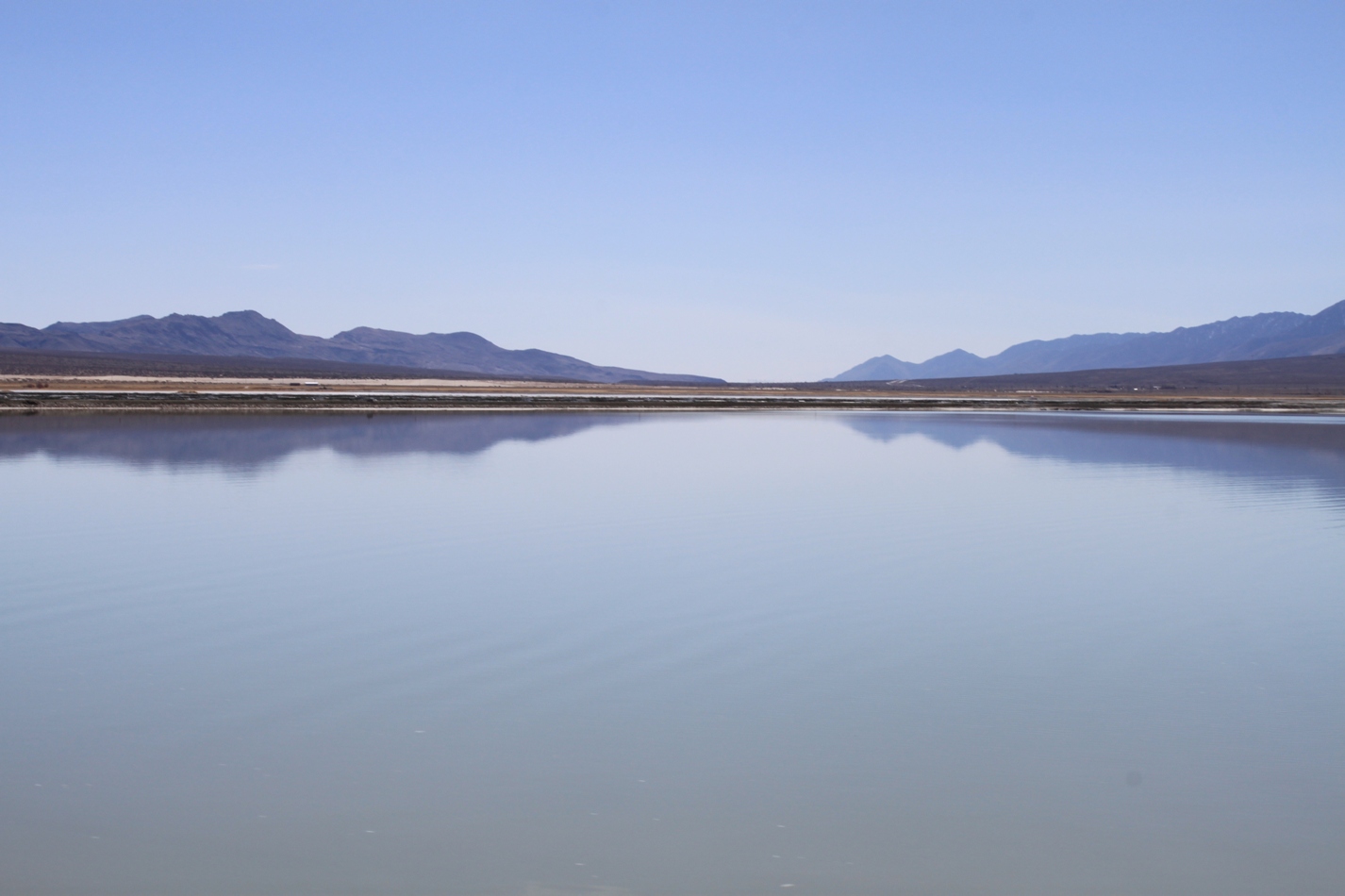 With managed vegetation, native saltgrass is planted in rows to stop the movement of dust. 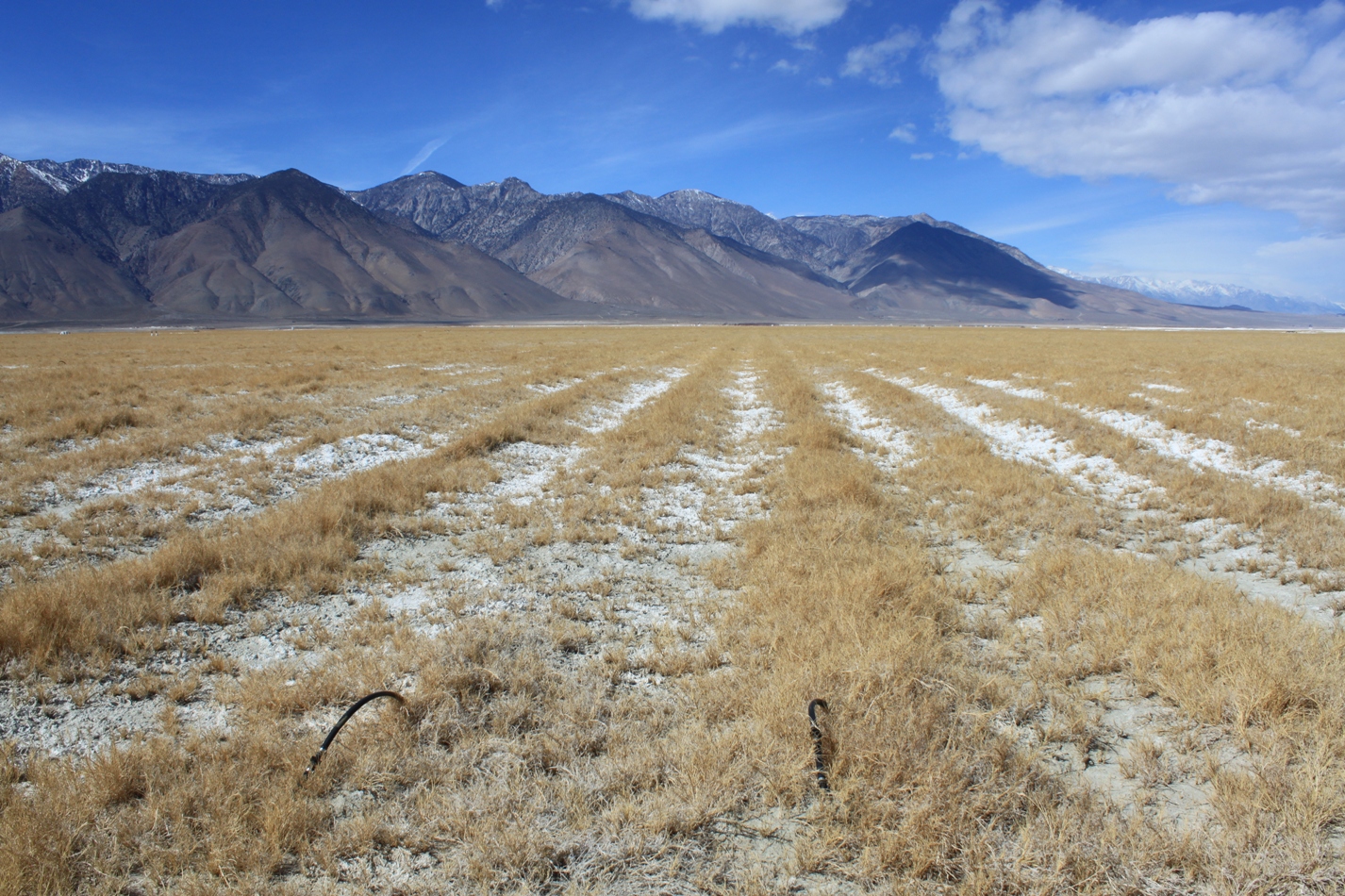 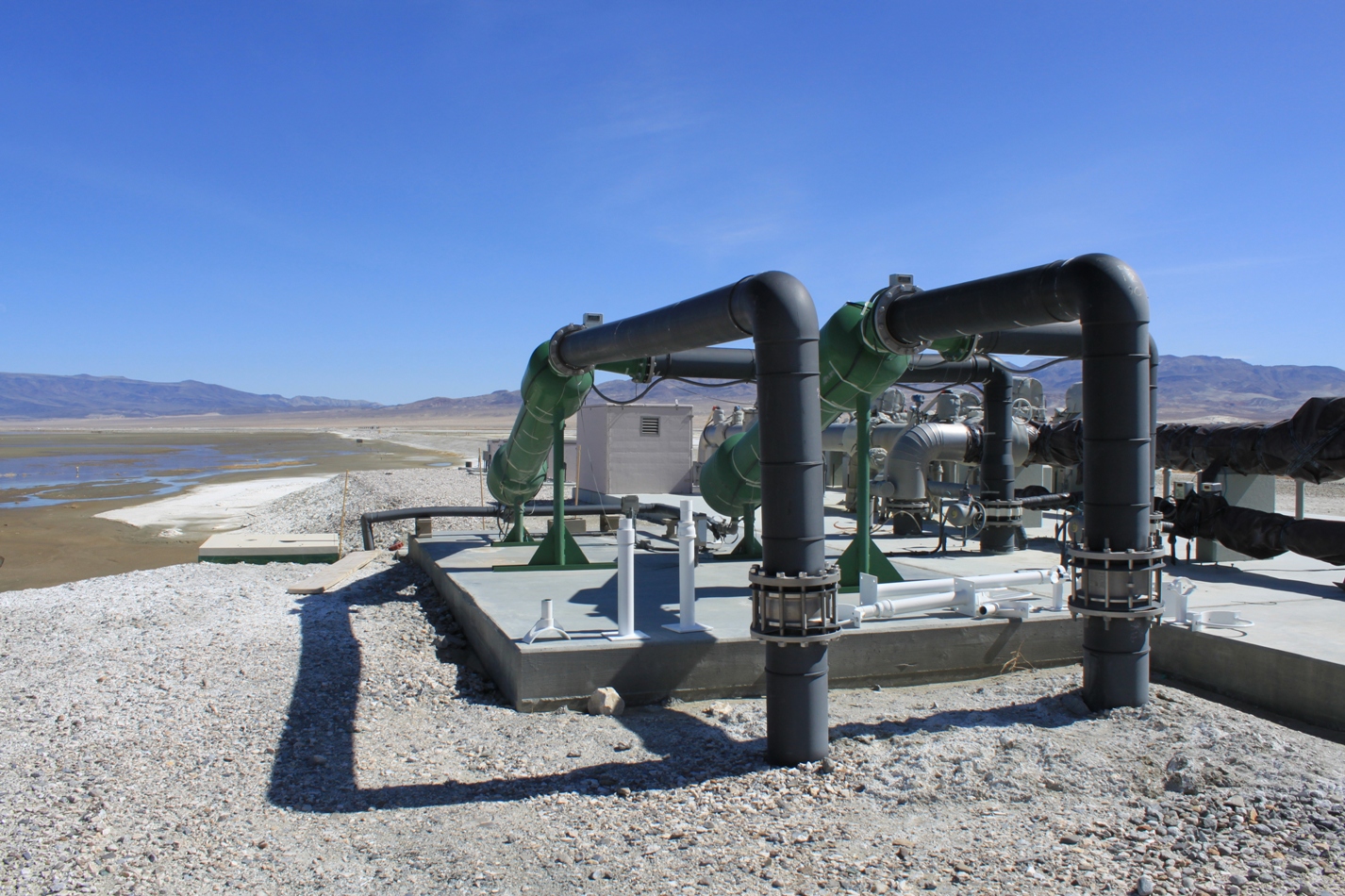 It’s an on-off switch for the lake … the lake is ON today, LOL! 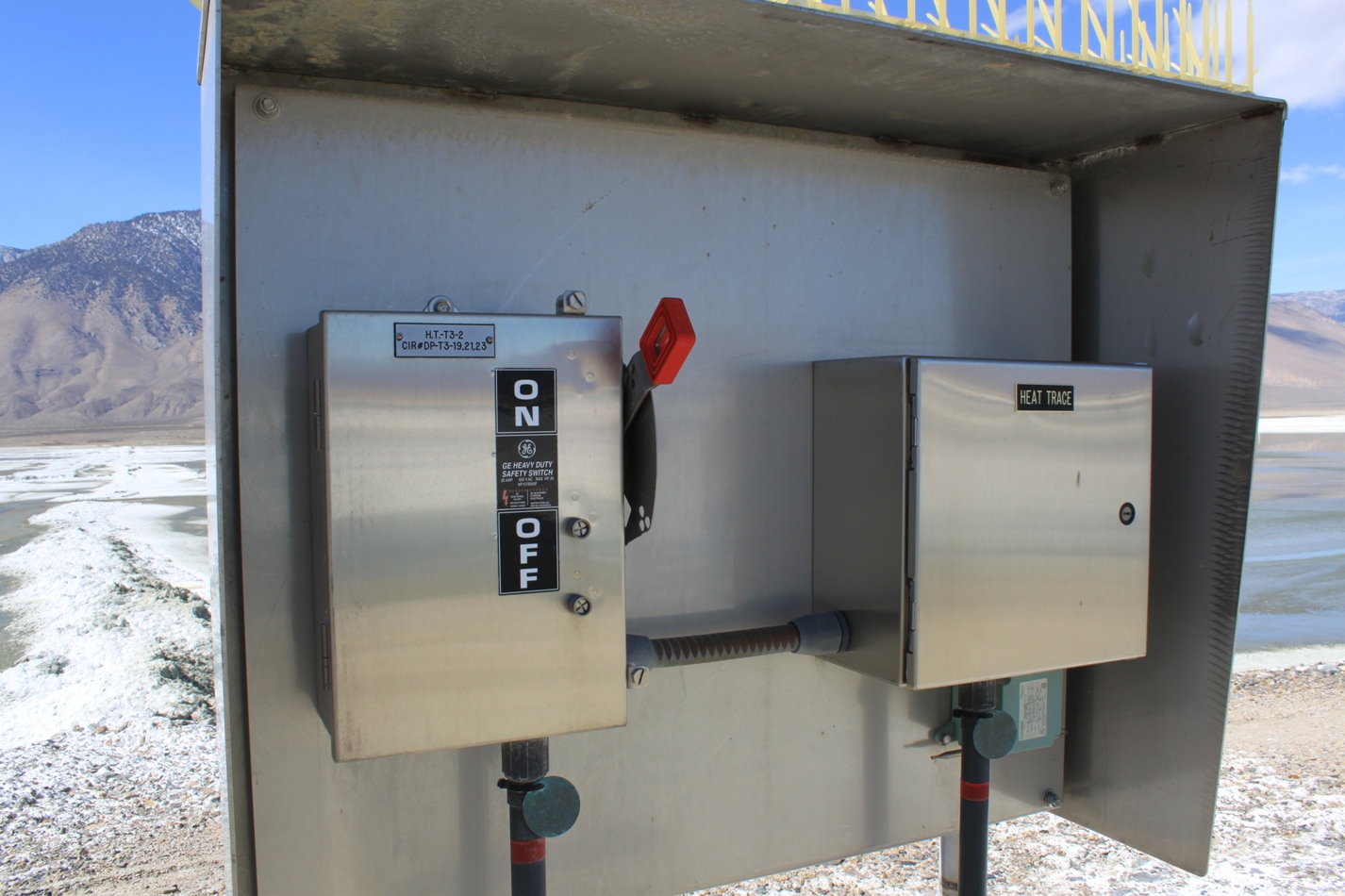 This picture below is one of my favorites … but it appears that this big manual valve, which looks so impressive, is just a big on-off wheel. Water apparently doesn’t shoot out of this big pipe. Darn. 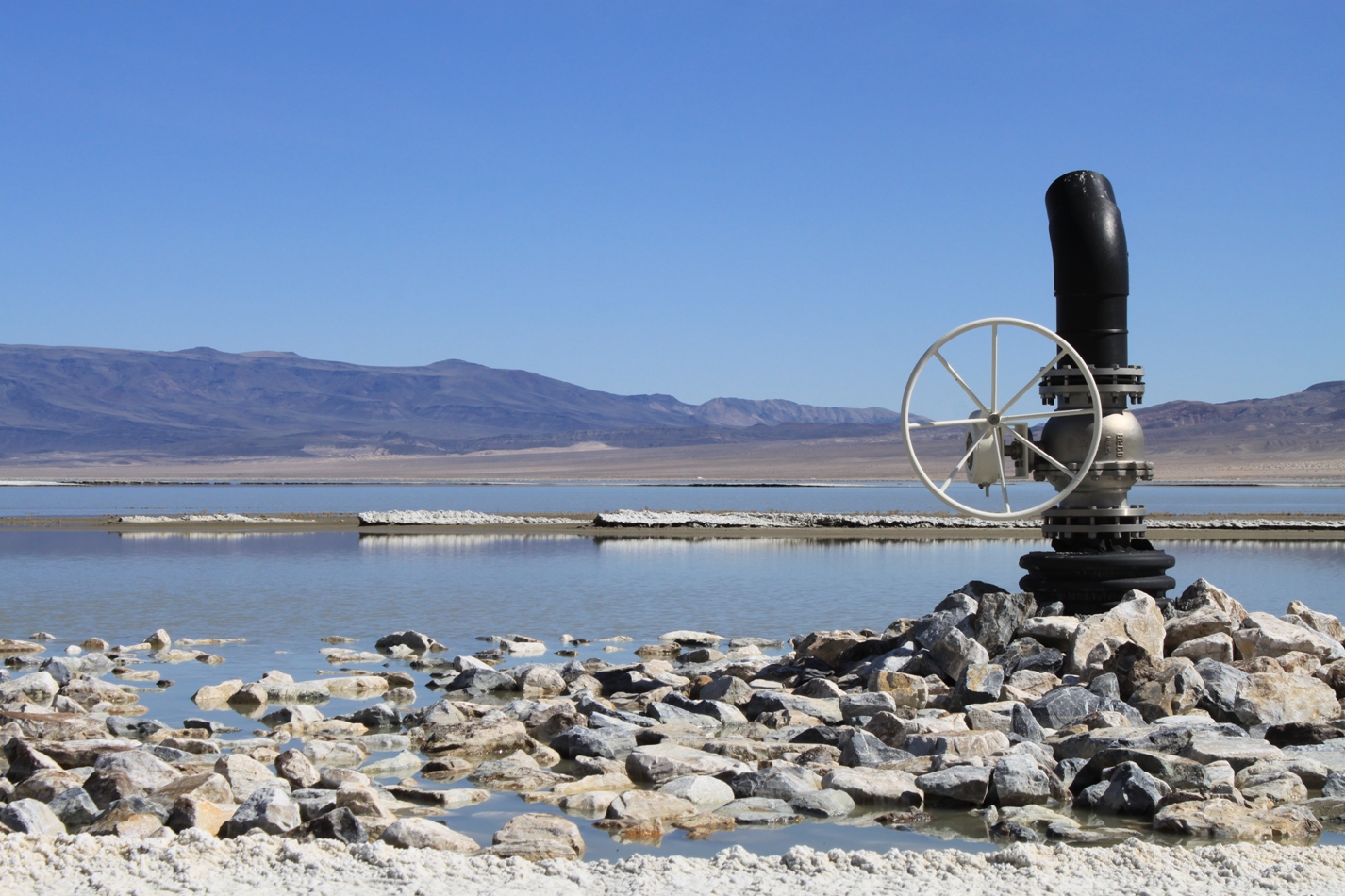 While we were there, DWP was installing gravel on a portion of the lake bed: 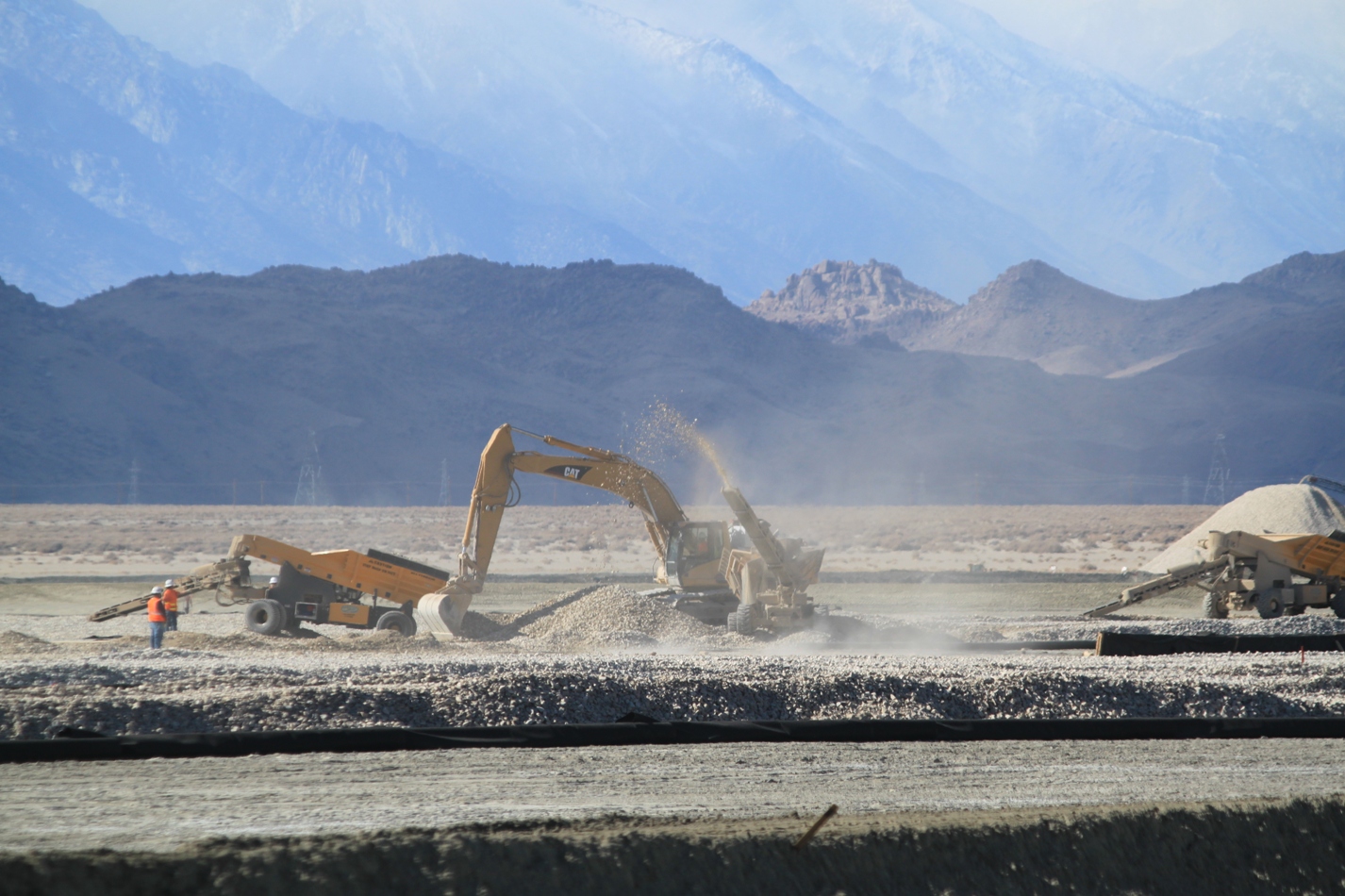 The brine pool represents what remains of Owens Lake. Some people say, why spend all this money, why not just let the water flow into the lake? Well, if they did that, then the water would all flow to the lowest topographic point – which would be the brine pool.  It wouldn’t do much good since the parts of the playa that are the most emissive of dust particles are the shorelines – especially the eastern side of the lake, which is located farthest from the brine pool.  To further complicate matters, the brine pool is offset to the west due to earthquake faulting in the area – or, in other words, its been moved farther away from the problem areas.  You’d need a lot of water, and even then, the dust problem wouldn’t be solved, at least not for many, many years. It is entirely possible that if Los Angeles turned off the aqueduct and let all the water flow into the lake, it still wouldn’t be enough.  Owens Lake had been drying up since the end of the glacial era, and dust storms have been happening here since long before Los Angeles came for the water. (I have a 1901 USGS photo in my presentation to prove it!)  It’s in the geology of this playa.  I explain it all in my project, so I’m not going to tell you now. You’ll just have to wait on the edge of your seat! 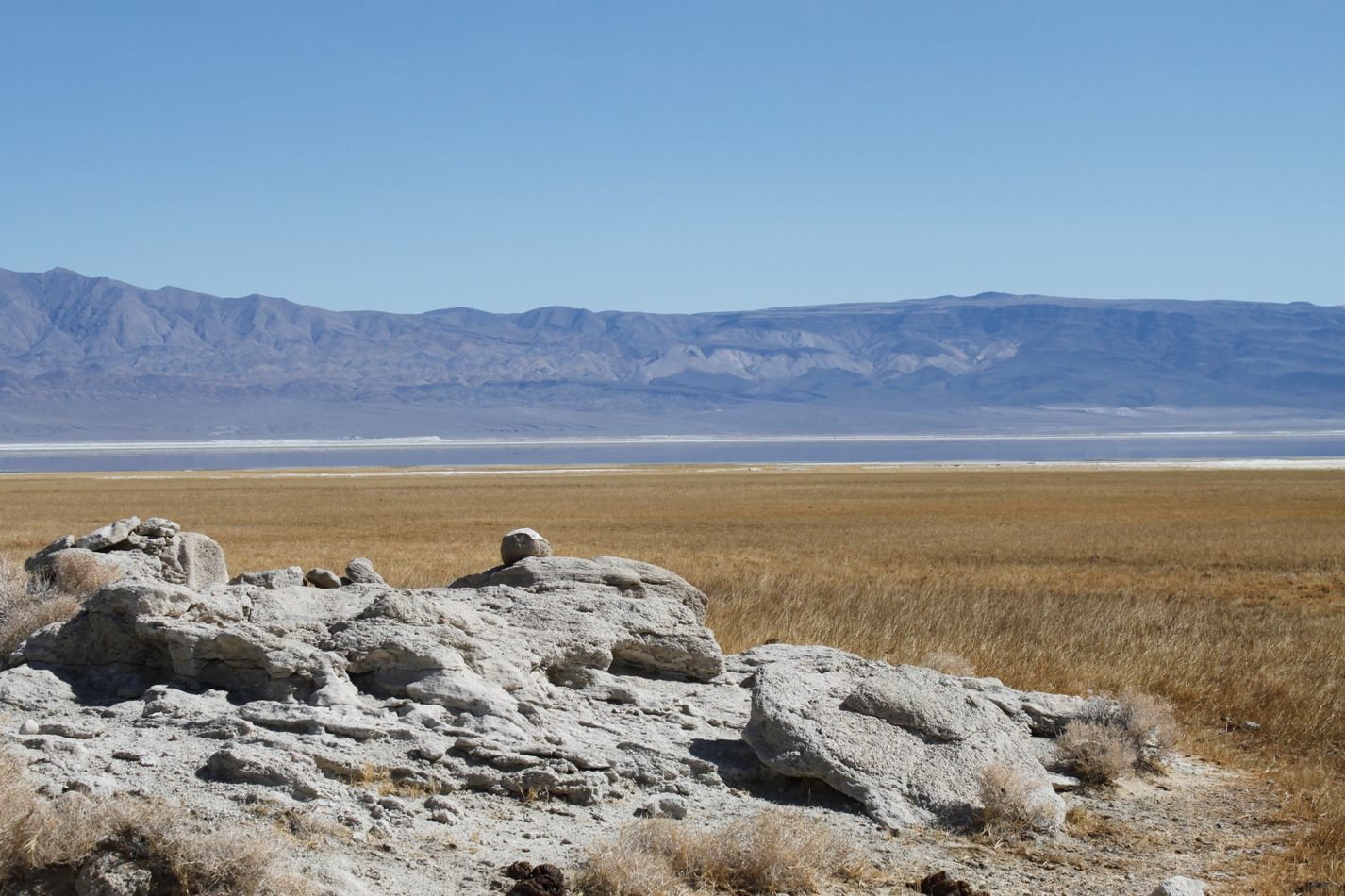 One technique they are experimenting with to control dust is tilling.  Basically, on the clay soils on the south side, they bring in a bulldozer to till the surface.  This reduces the wind speed at the surface of the playa, thereby reducing dust. 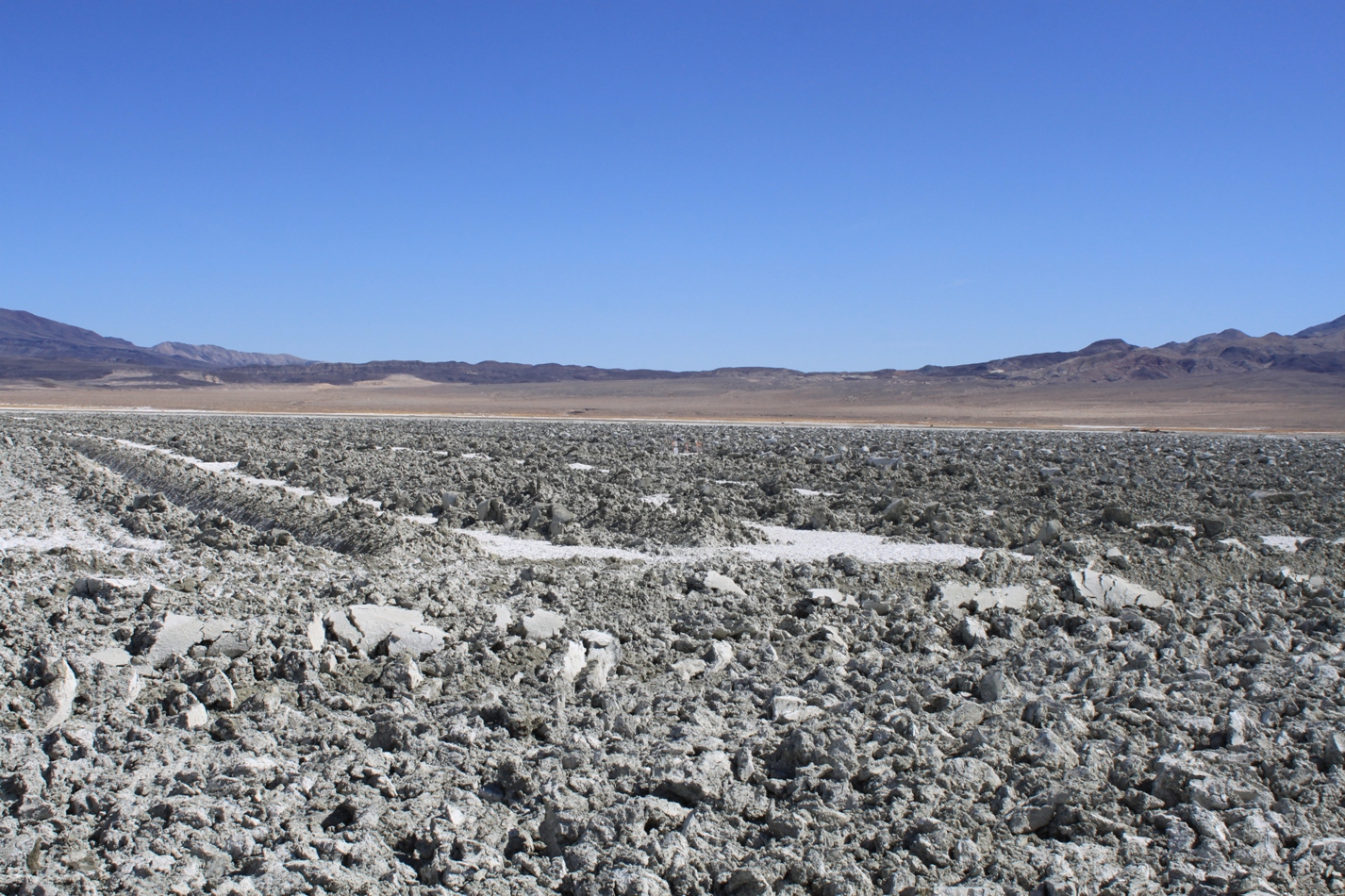 When it is no longer effective, they irrigate it to increase the soil moisture, let the water sink down, and then till it again. 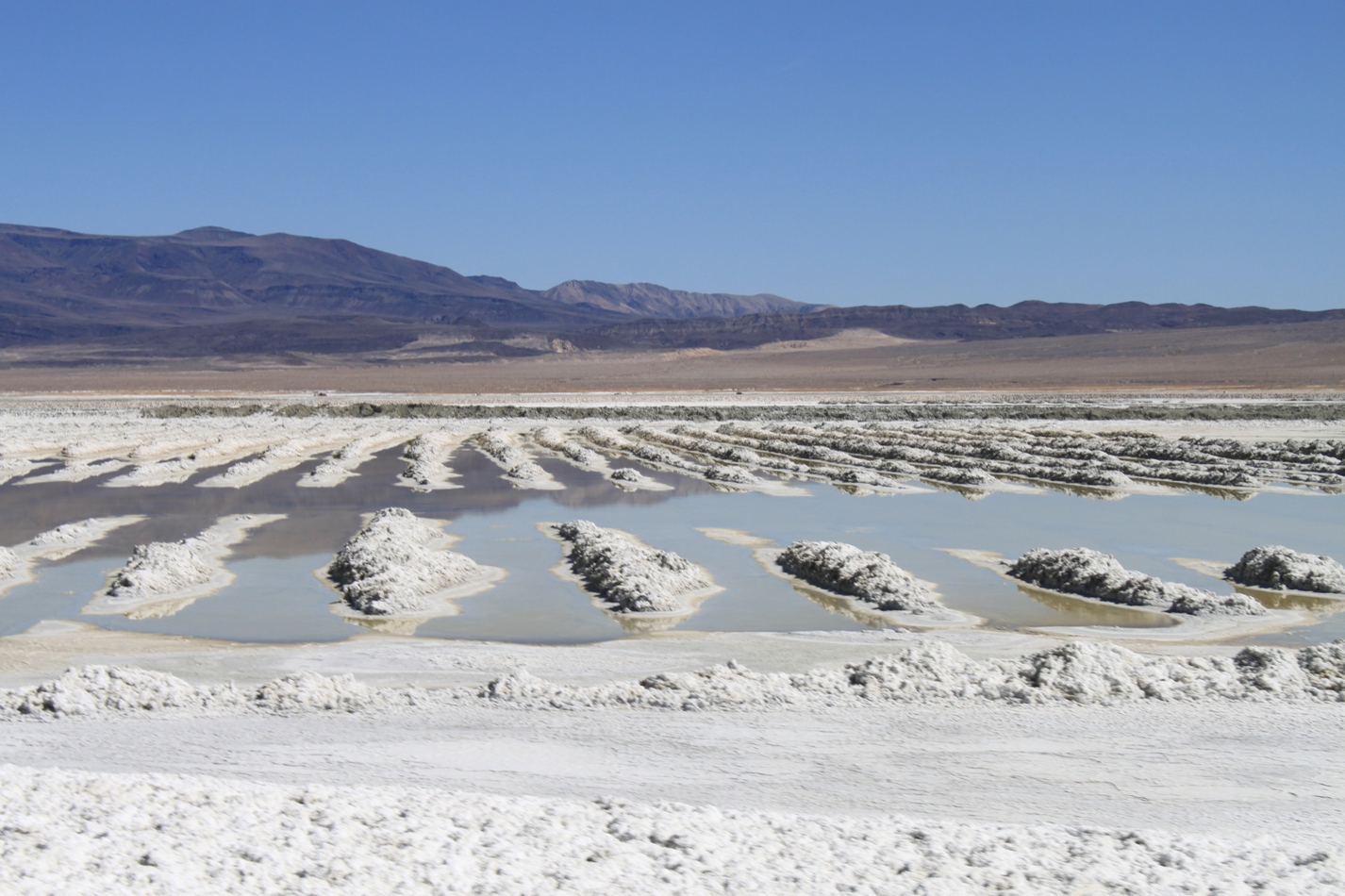 The last part of the area to be addressed are the Keeler Dunes.  It is believed that the dunes were created when the lake was drained; this sand moved off the lake bed and onto the surrounding area, close to the small town of Keeler. They are the last significant source of dust emissions in the area. 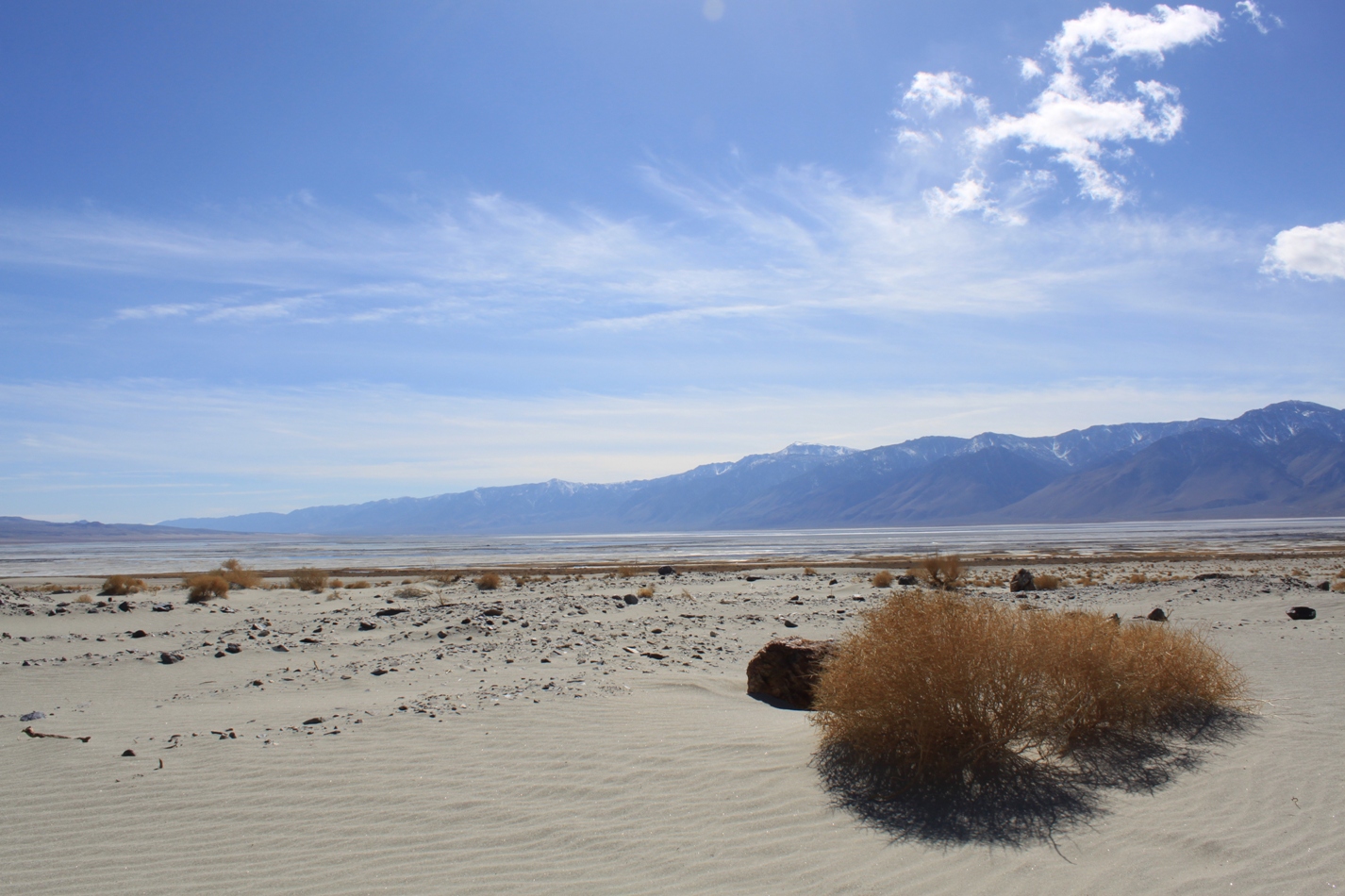 Over at the northern portion of the lake, there are wetlands and alkali marshes.  The dust control project here has reduced the dust coming off the lake bed by 90%, but the area still doesn’t meet federal standards.  More will need to be done.  Certainly those that must breathe the air here are thankful; however, the ones that have really benefited here are the birds which have returned in large numbers. 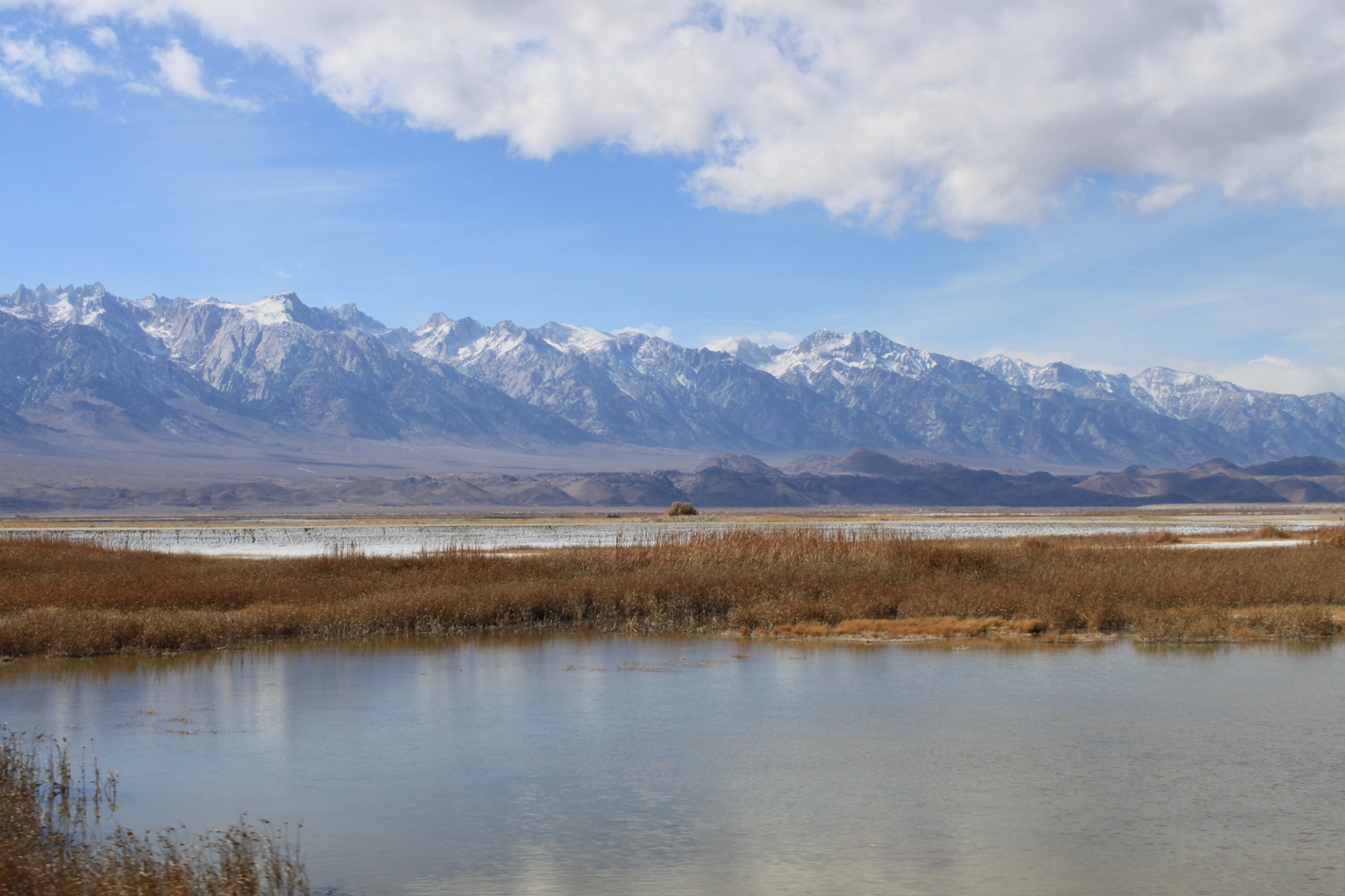 Next weekend, I return to Owens Lake to meet with a gentleman from the Eastern Sierra Audubon Society who will take me to see the birds and the emerging wildlife habitat – a much-needed wetland for California.  I’ll be posting those pictures afterwards, but if you want a preview, check out this post from photographer Robin Black: Look closer.

I’ll post up my final dust control project here when it is done (it will be in flash-movie format, not the standard photoblog post), and I’ll be posting my pictures of the birds and habitat in the upcoming weeks, so be sure to check back! 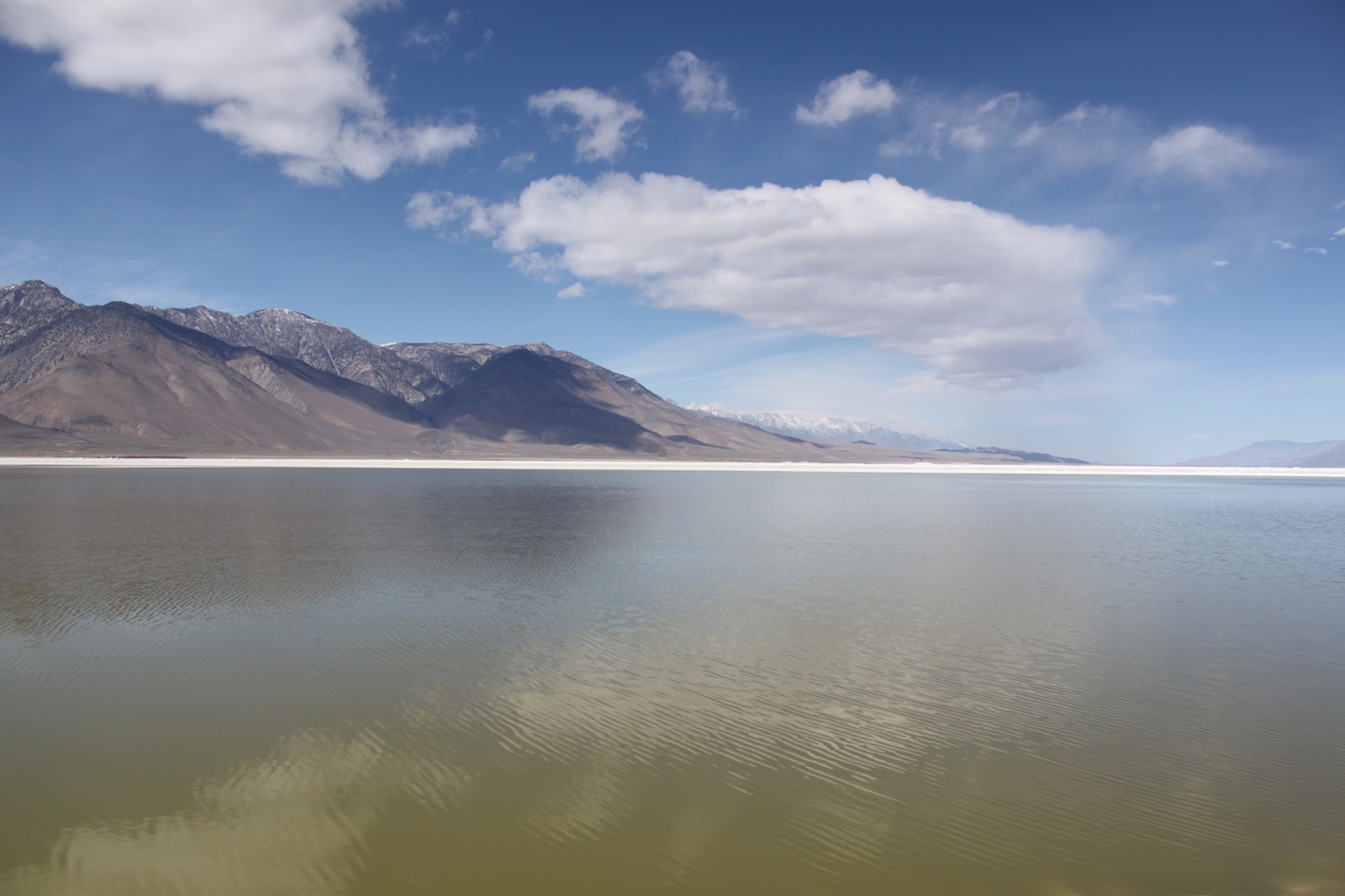 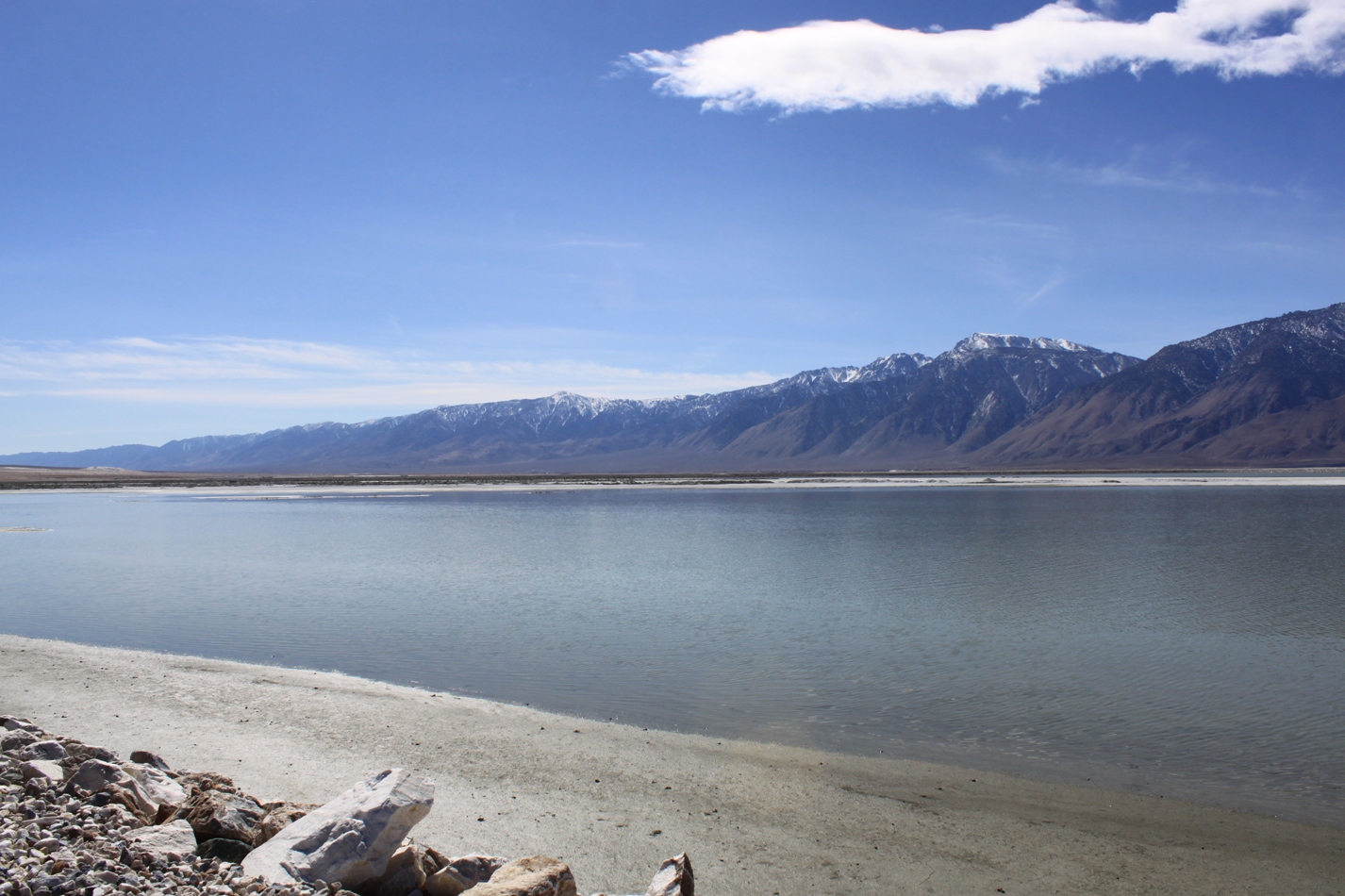 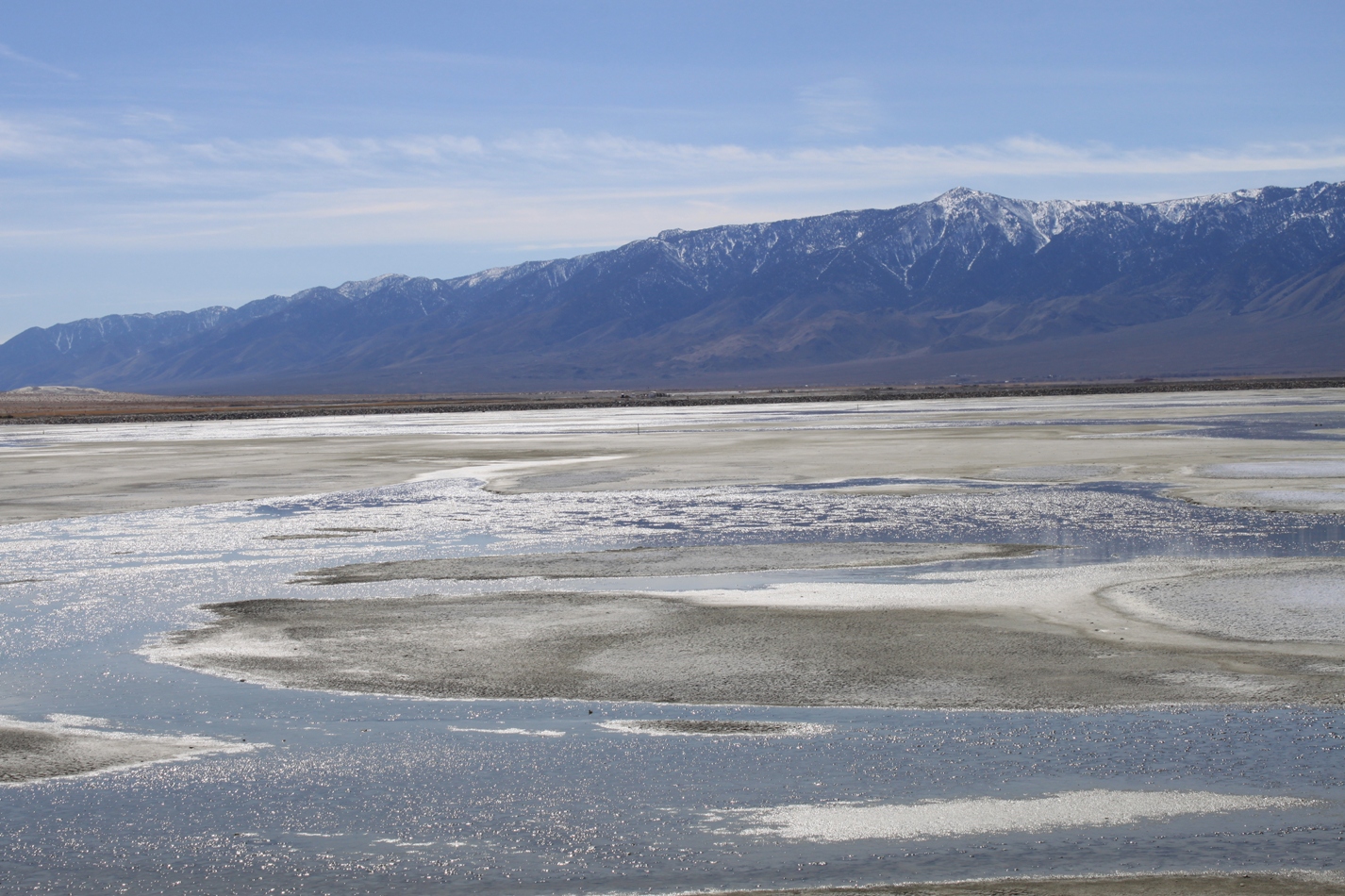 FOR MORE ON OWENS LAKE AND THE DUST CONTROL PROJECT:

FOR MORE ON THE LOS ANGELES AQUEDUCT: