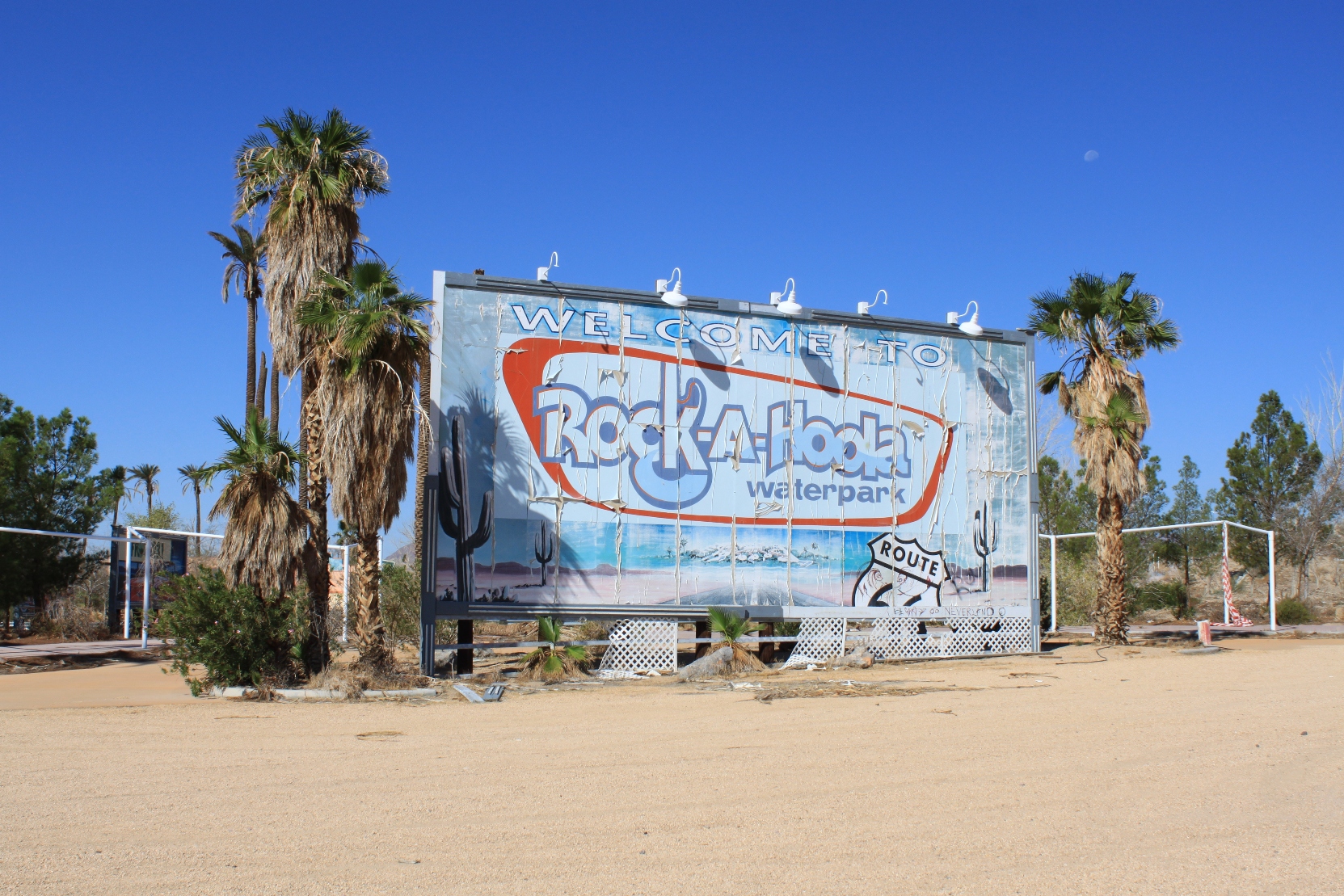 It was one of those rare weekends without kids, so we impulsively decided to take a road trip! We headed out the I-15 towards Vegas on a quest to answer a burning question of ours, just what is at Zzyzx Road? Along the way, we visited one of the creepiest places we’ve ever been, the abandoned Rock-a-Hoola waterpark, just outside of Barstow. 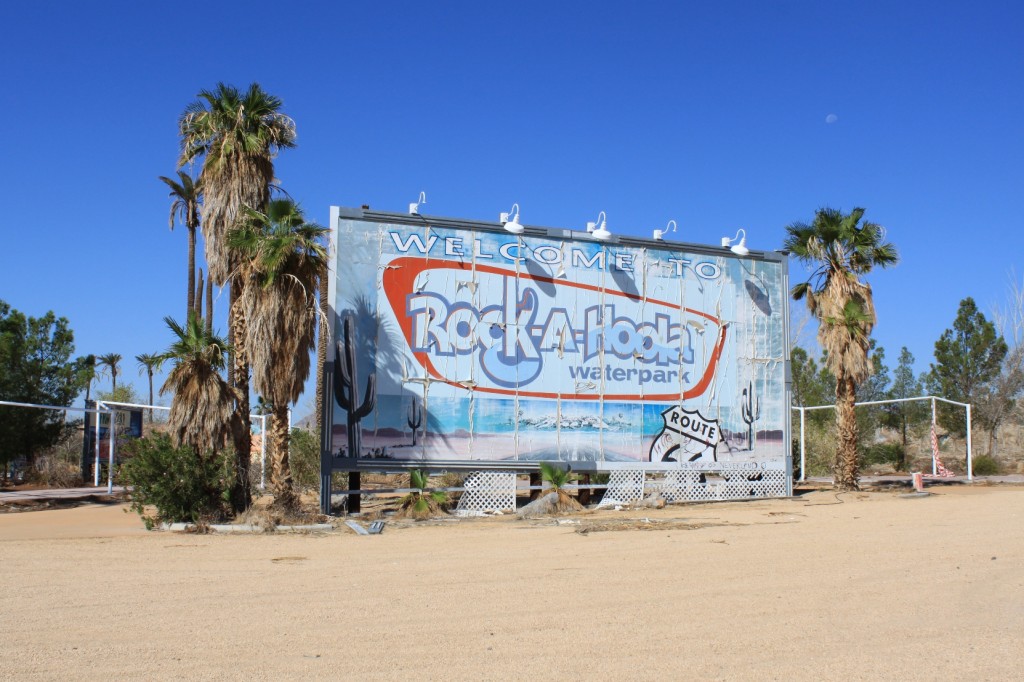 I had first seen the closed waterpark on a drive to Las Vegas several years ago. It had always intrigued me, but I hadn’t ever driven by it since, so this time I took the opportunity to stop by and check it out.

Home page readers, click on the “Read the rest of this page” to see more pictures.

When I first saw the park years ago, the water slides were still up and it was obvious from the freeway that it was a water park, although oddly enough, inconveniently located in the middle of the desert and without any apparent water source. 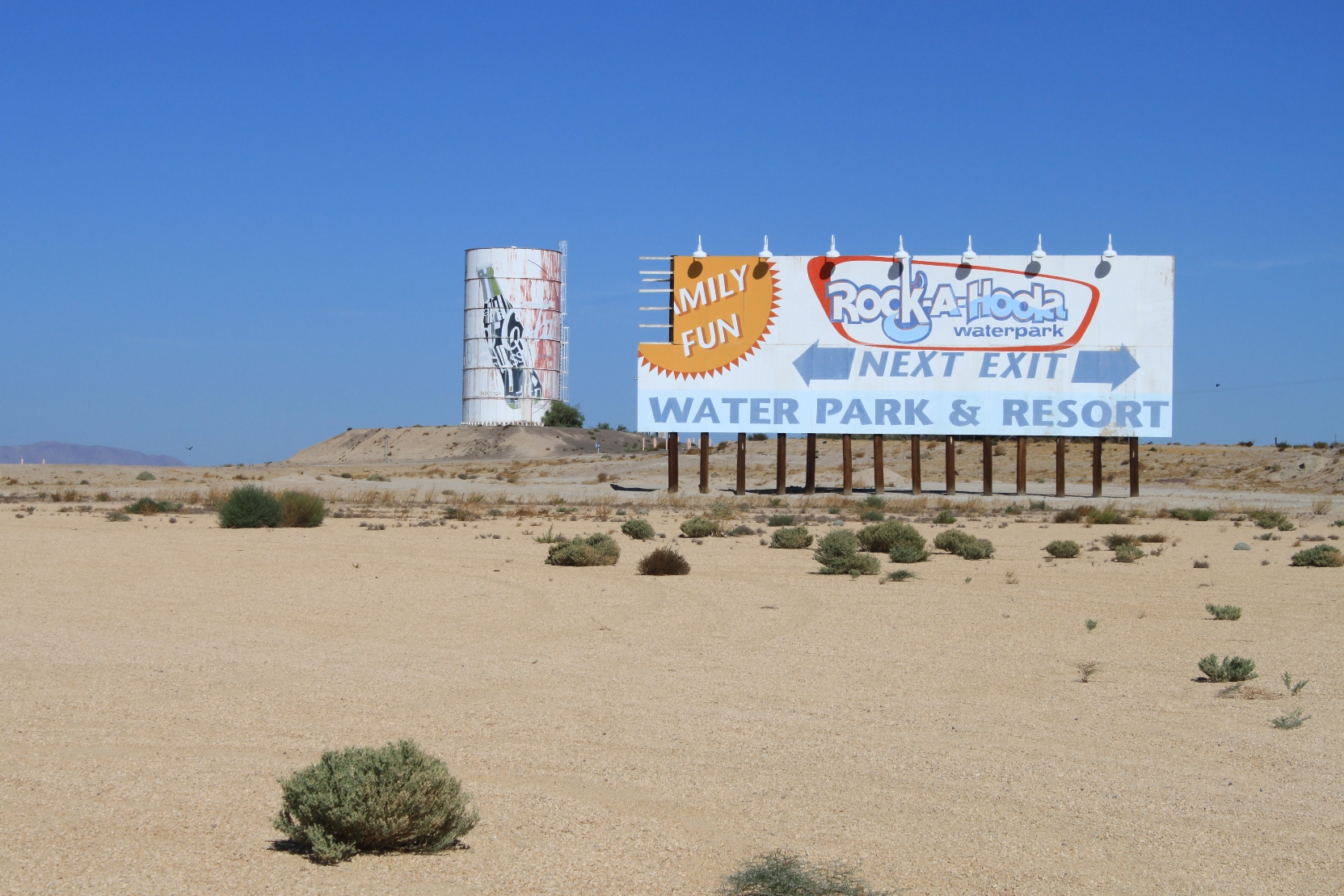 This time, the water slides had been removed and it was hard to tell what exactly it was from the freeway. Once we drove up to the park, I was surprised to find it unfenced and completely accessible – not even a sign telling us not to trespass. The property has been completely abandoned. 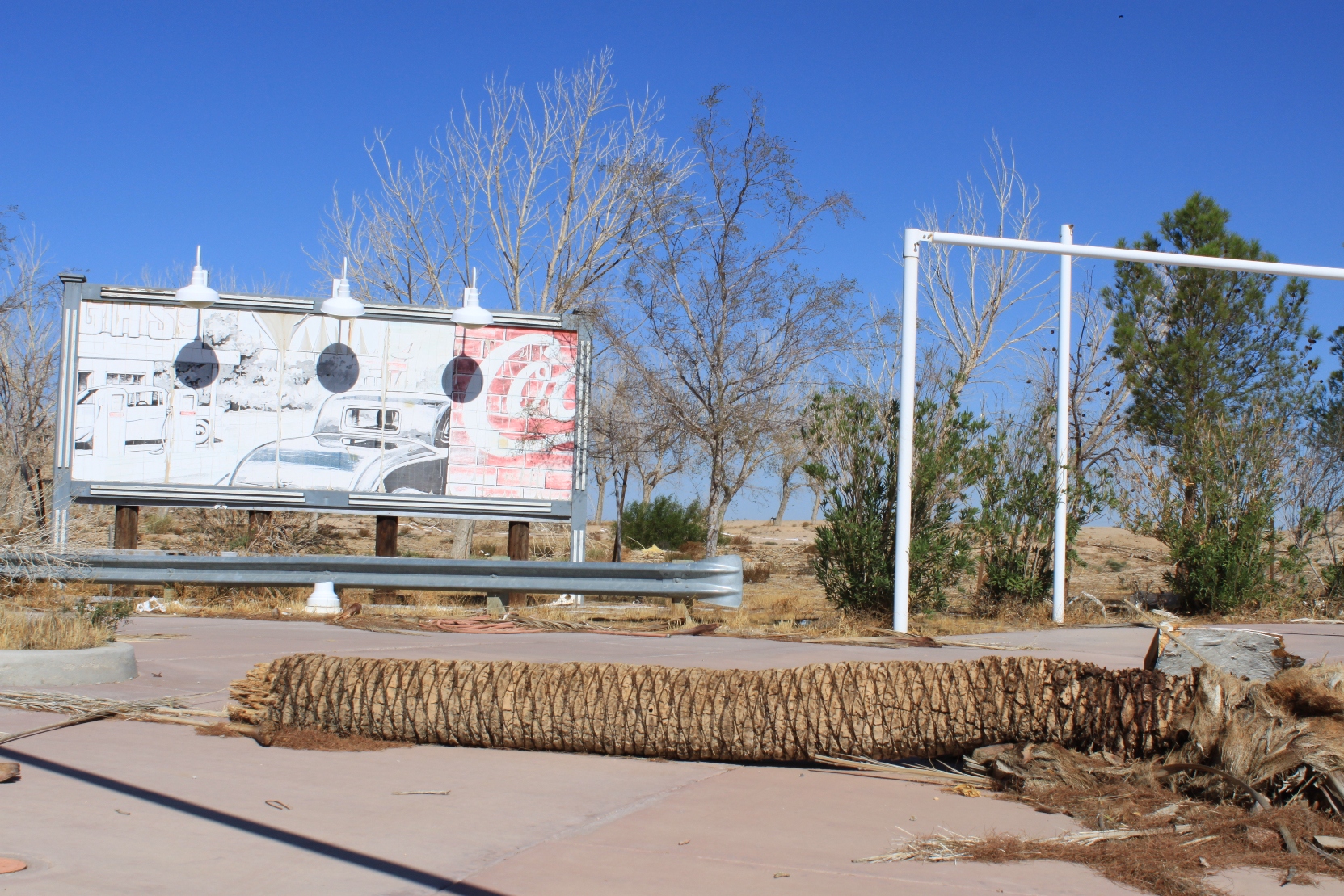 The park’s water supply came from the adjacent 273-acre Lake Delores, which was a man-made lake fed by the underground springs of the Mojave Aquifer.  In the picture below, the lake was located in the gray dirt areas in the upper left quadrant of the picture.  The lake was named after the owner’s wife and was used for jet ski races and other special events. 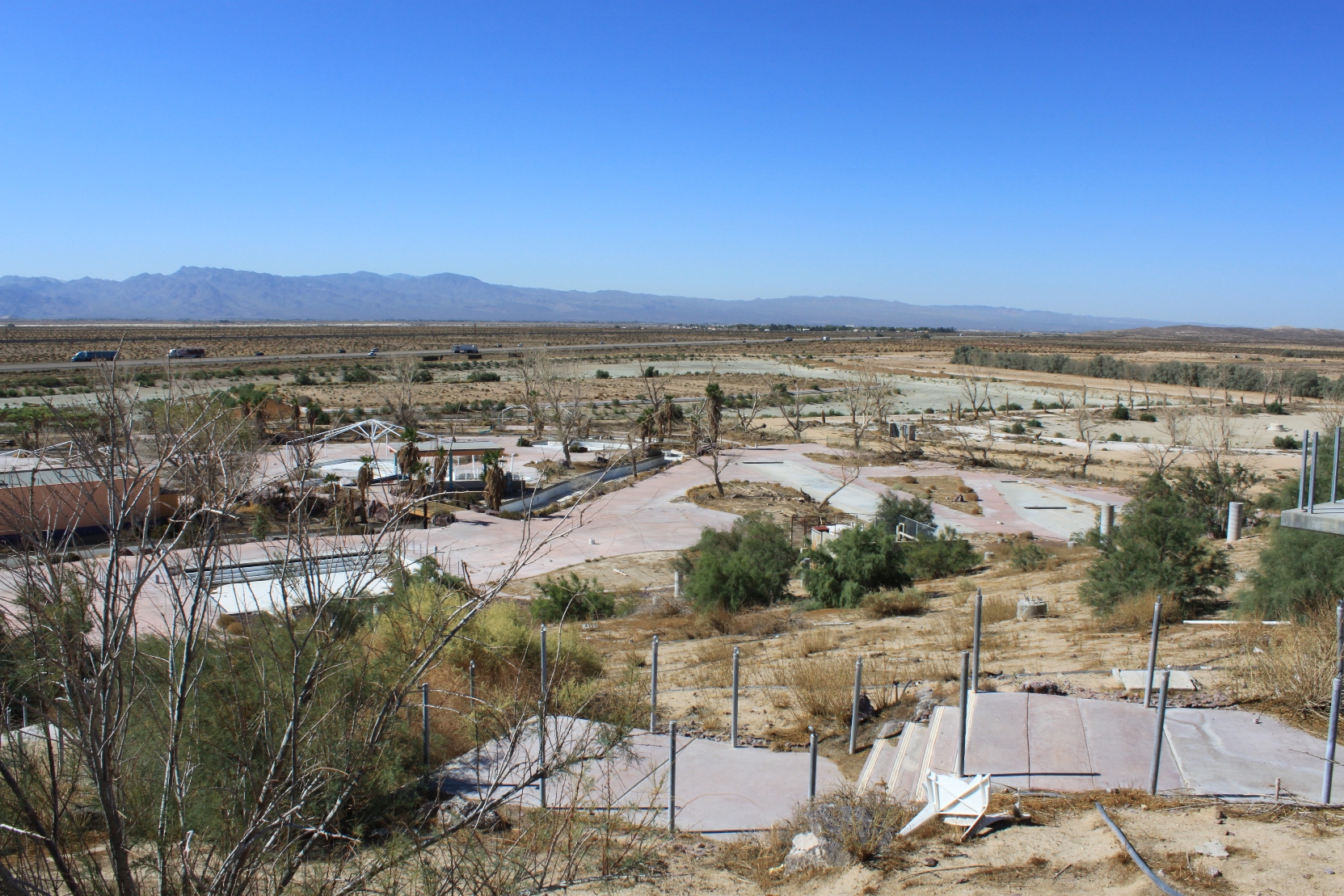 Originally built as a private recreation area for the owner’s extended family, Lake Dolores was expanded in the 1950s and 60s to include a campground.  Over the next 25 years, water slides and attractions were added.  Some of the attractions included zip-lines, trapezes, and stand up slides.  Check out this photo gallery of the original park on flickr. 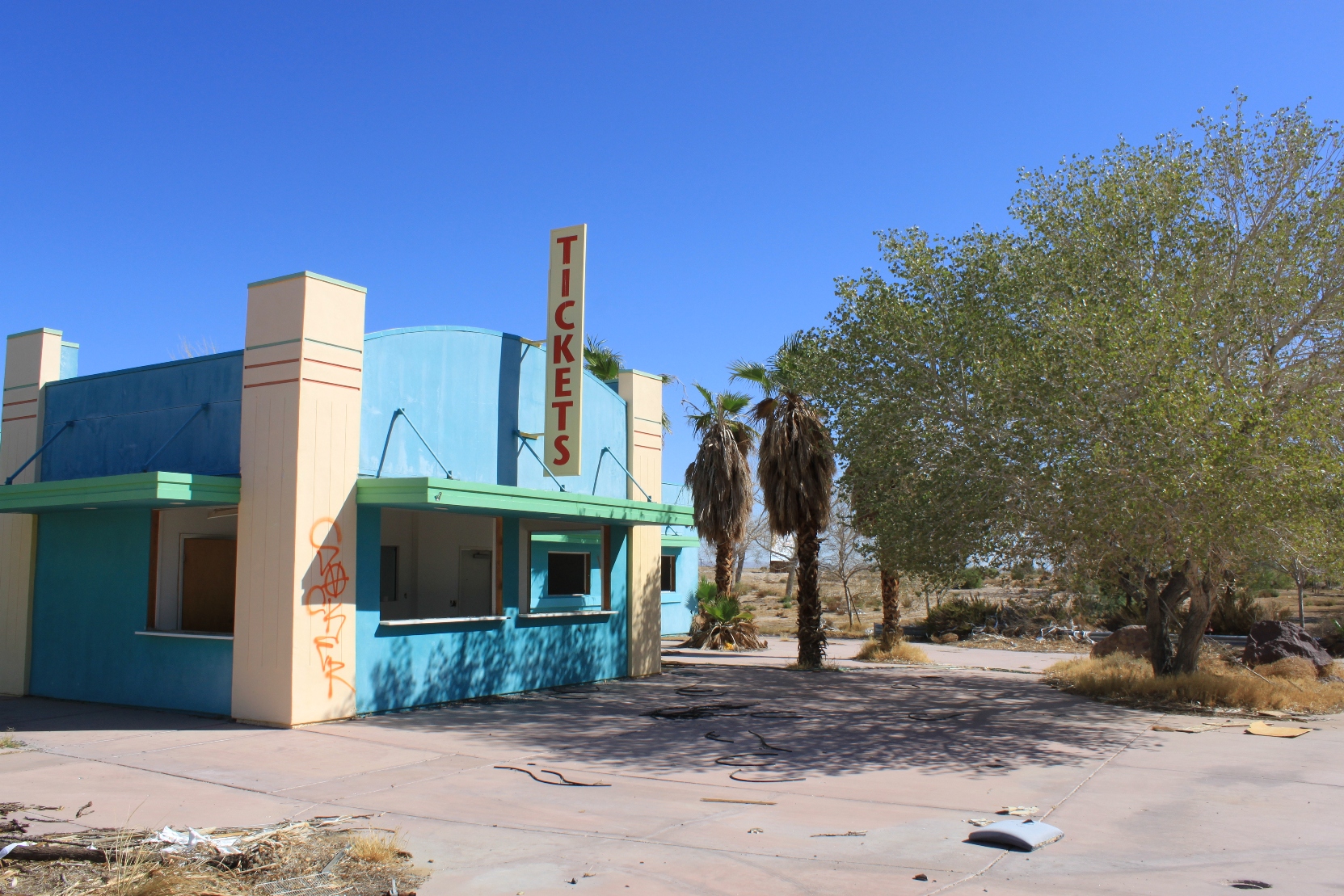 Pictured below: the entrance fountain.  Click here to see a picture of the fountain when the park was in operation. 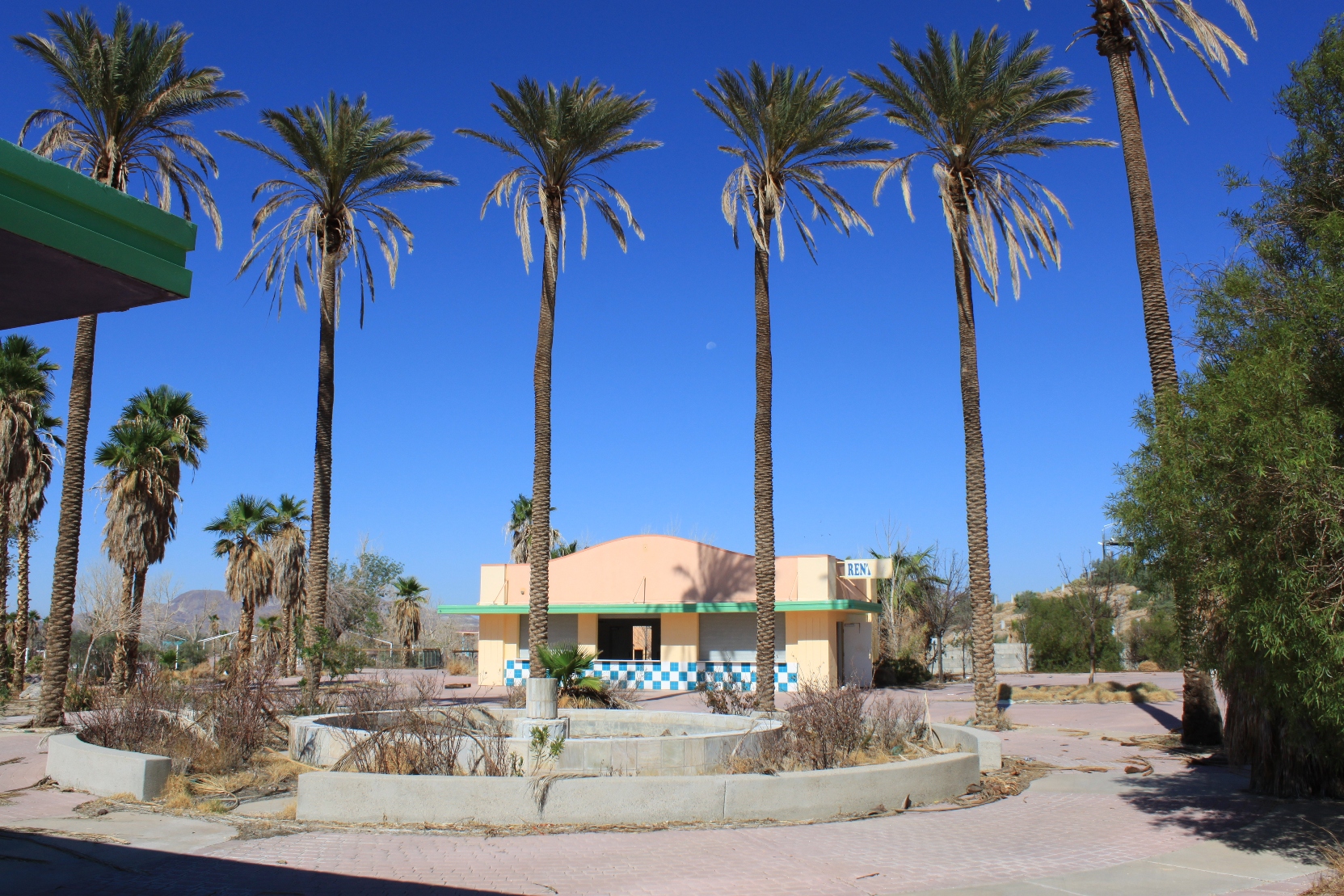 The park was popular throughout the 70s and into 80s, finally closing in the late 80s.  In August of 1990, the park was sold to an investment group who remodeled it with the 50s motif, renaming it Rock-A-Hoola Water Park and reopening in 1998. 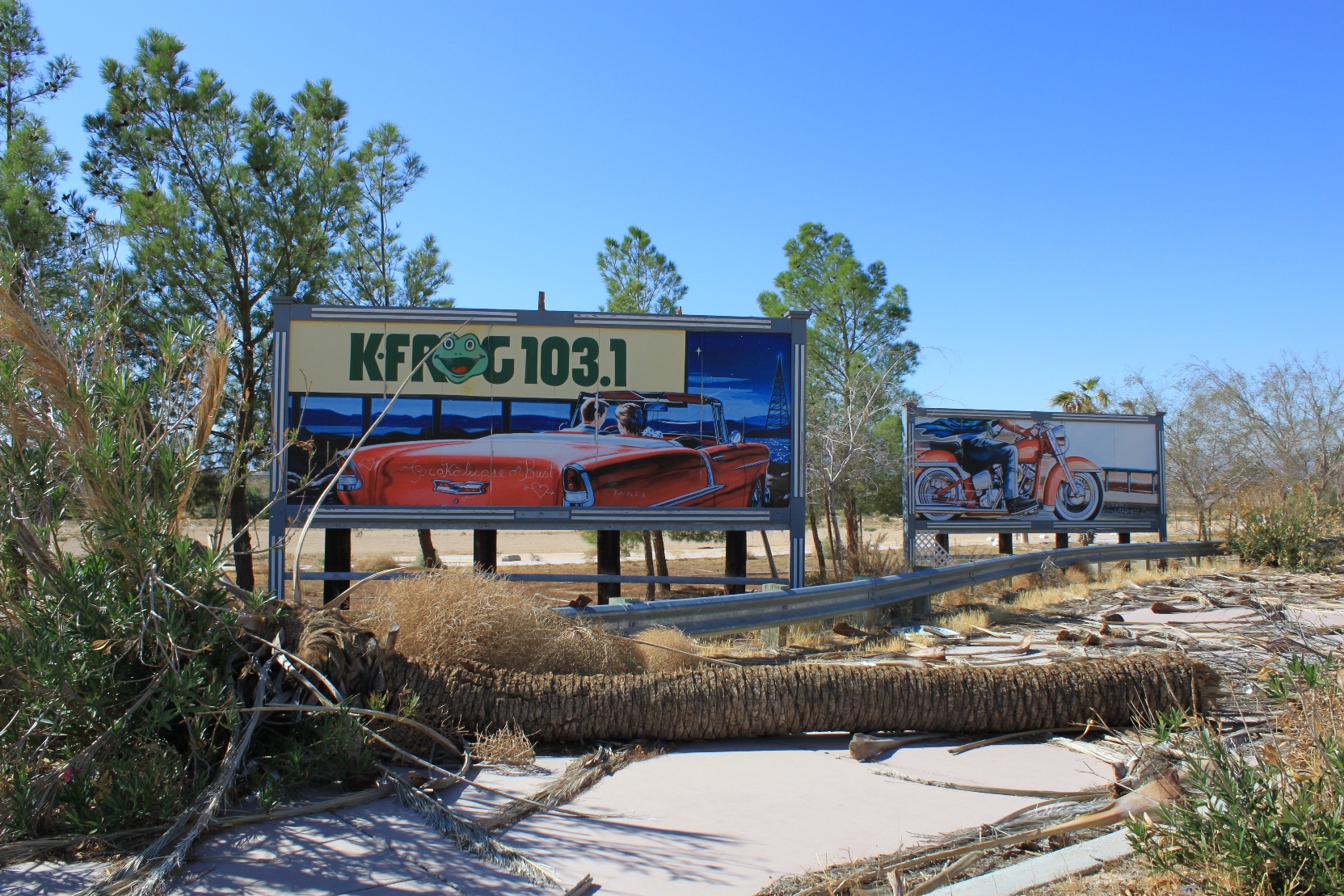 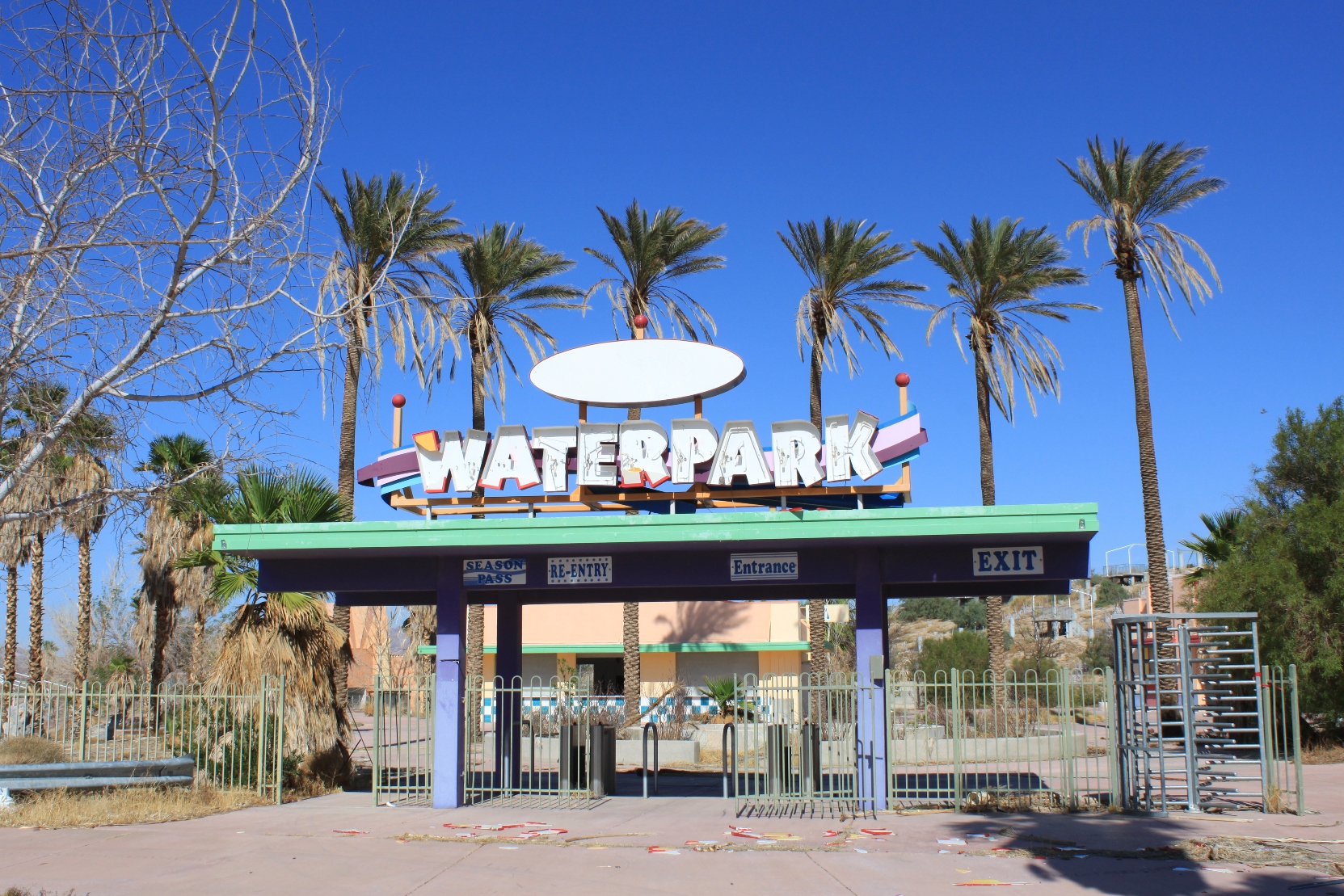 Sold once again, the park reopened under the name “Discovery Park” in 2002, closing in 2004 for the last time.  (Pictured below: the lazy river.  Click here for a similar view of the park when it was in operation.) 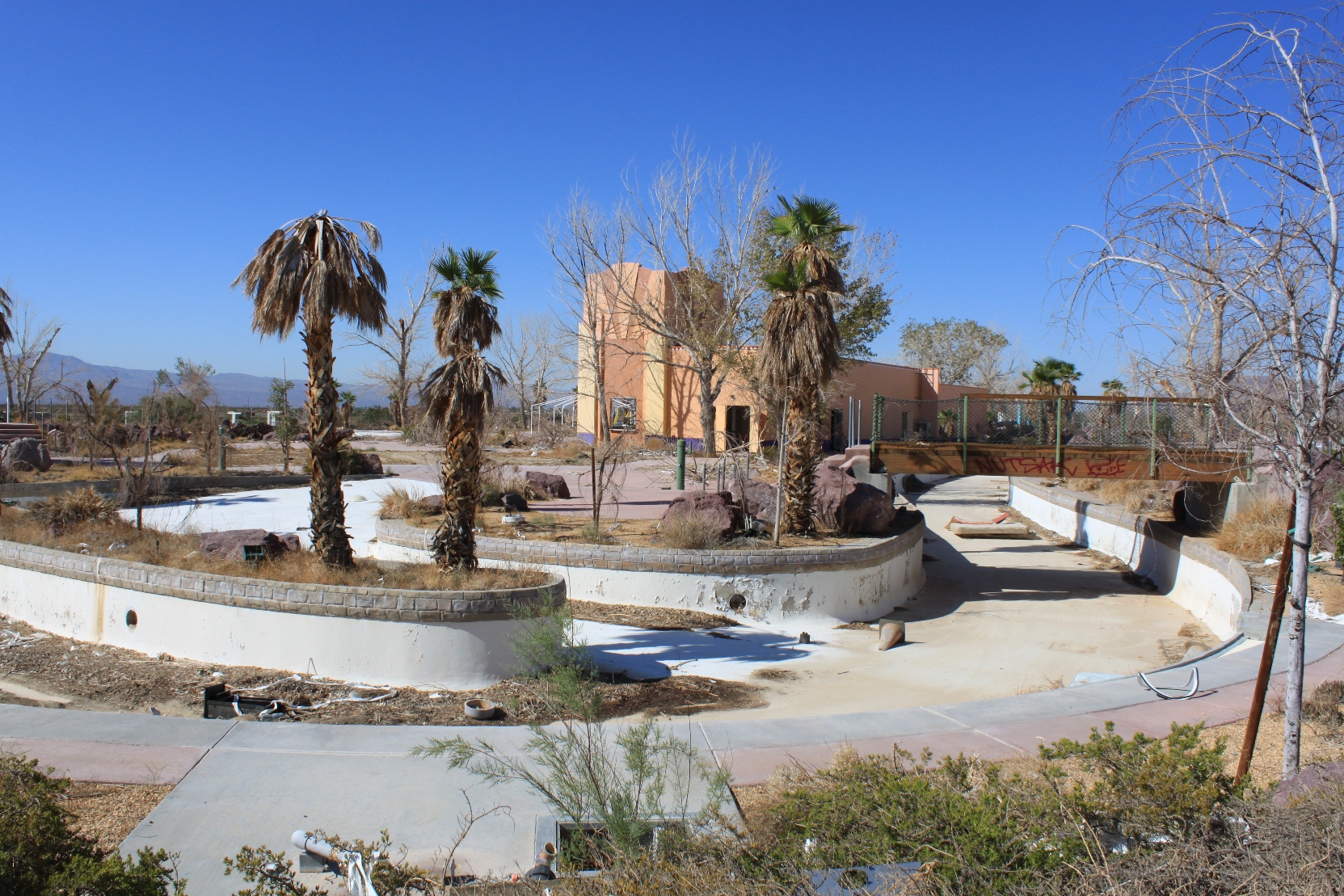 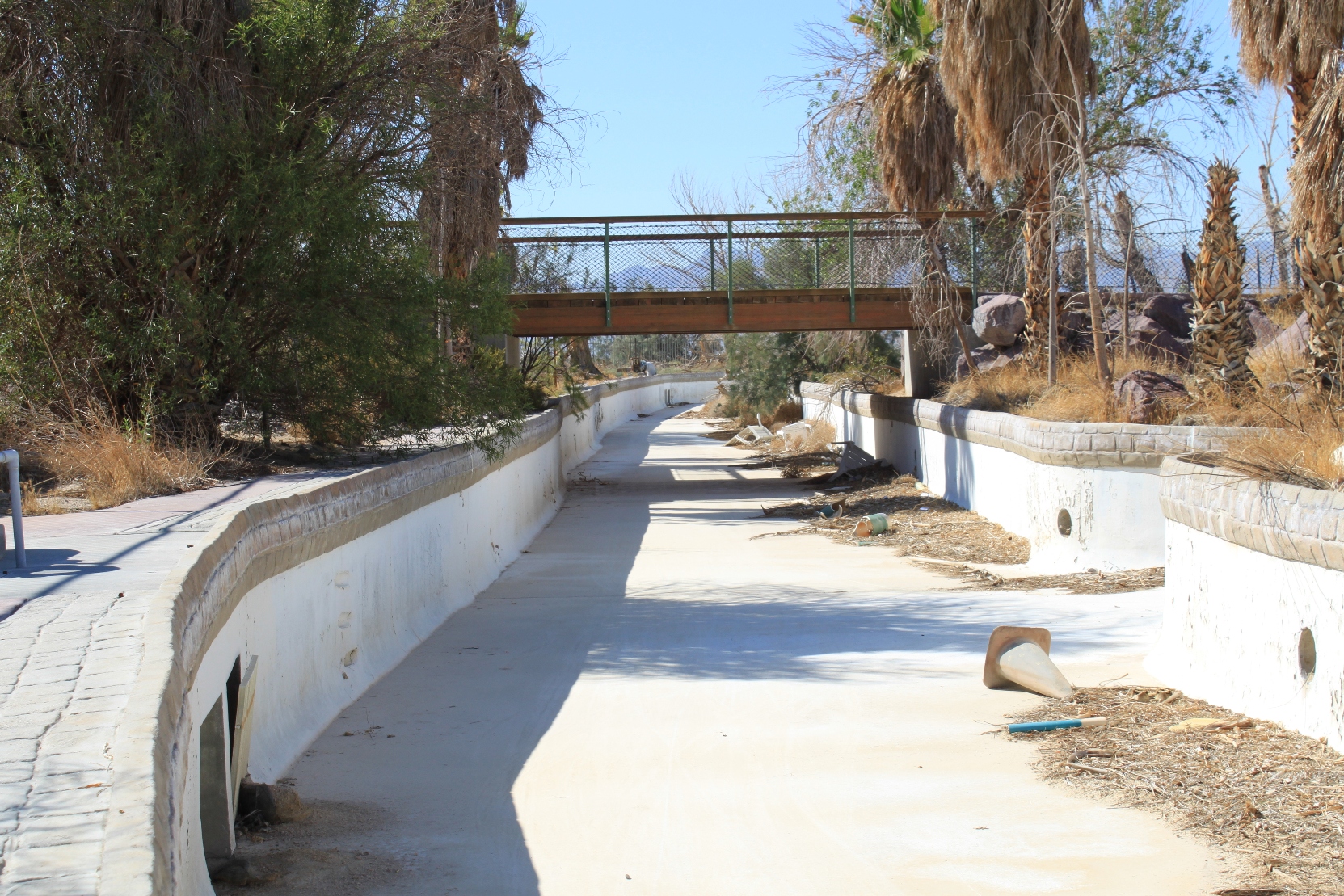 Over the years, the slides and other items of value have been sold, and the property has been abandoned.  Pictured below: the desert as seen through the supports for a large water slide. Check out this MTV Video of Rob, Big, and Danny Way skating on the water slides. 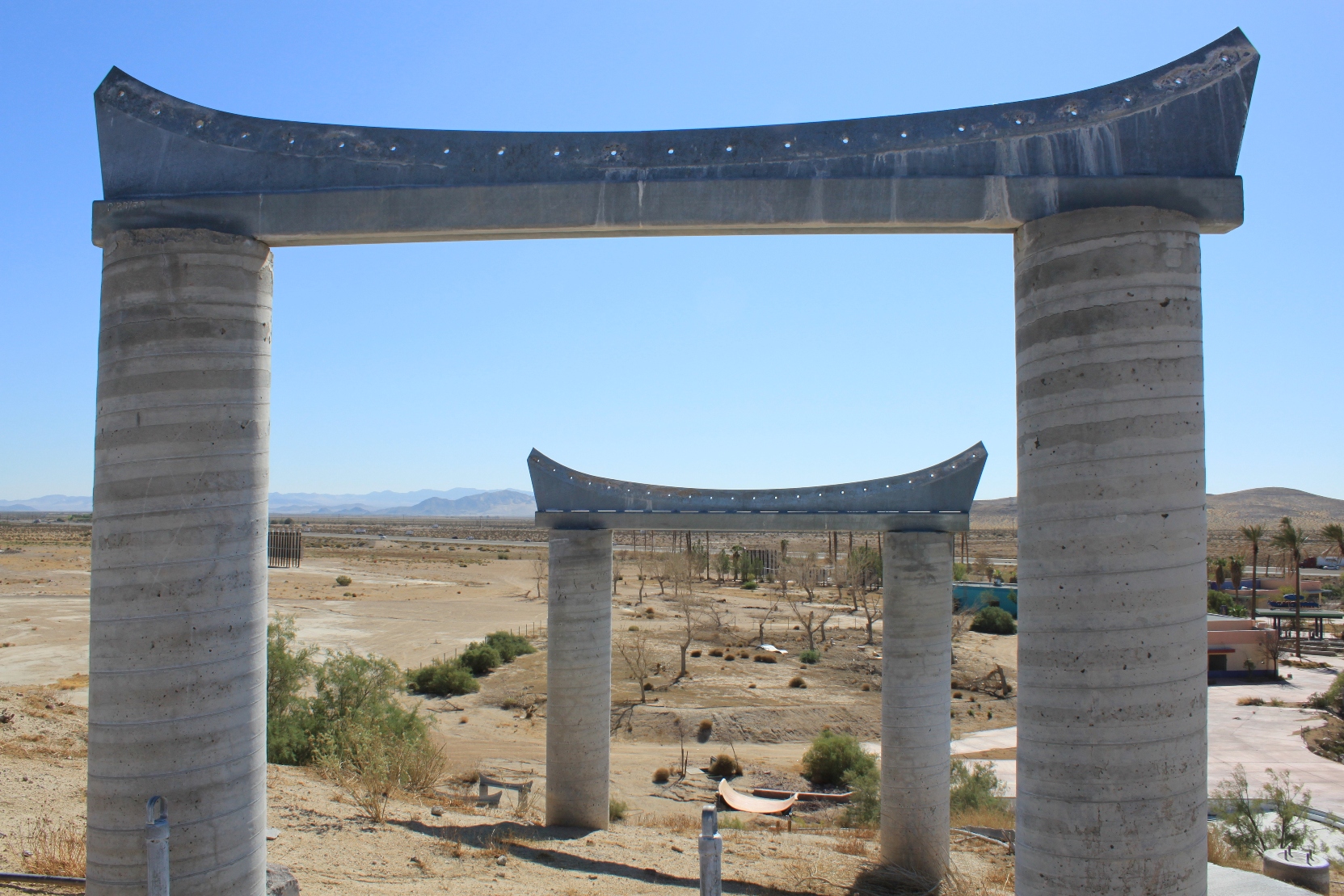 Given the openness of the property, I was pleasantly surprised to see very little graffiti. In fact, by looking at other people’s photos, it appears that very little moves around here. Pictured below: chair in the pool. Has this chair really been sitting there for two years? That’s just weird! 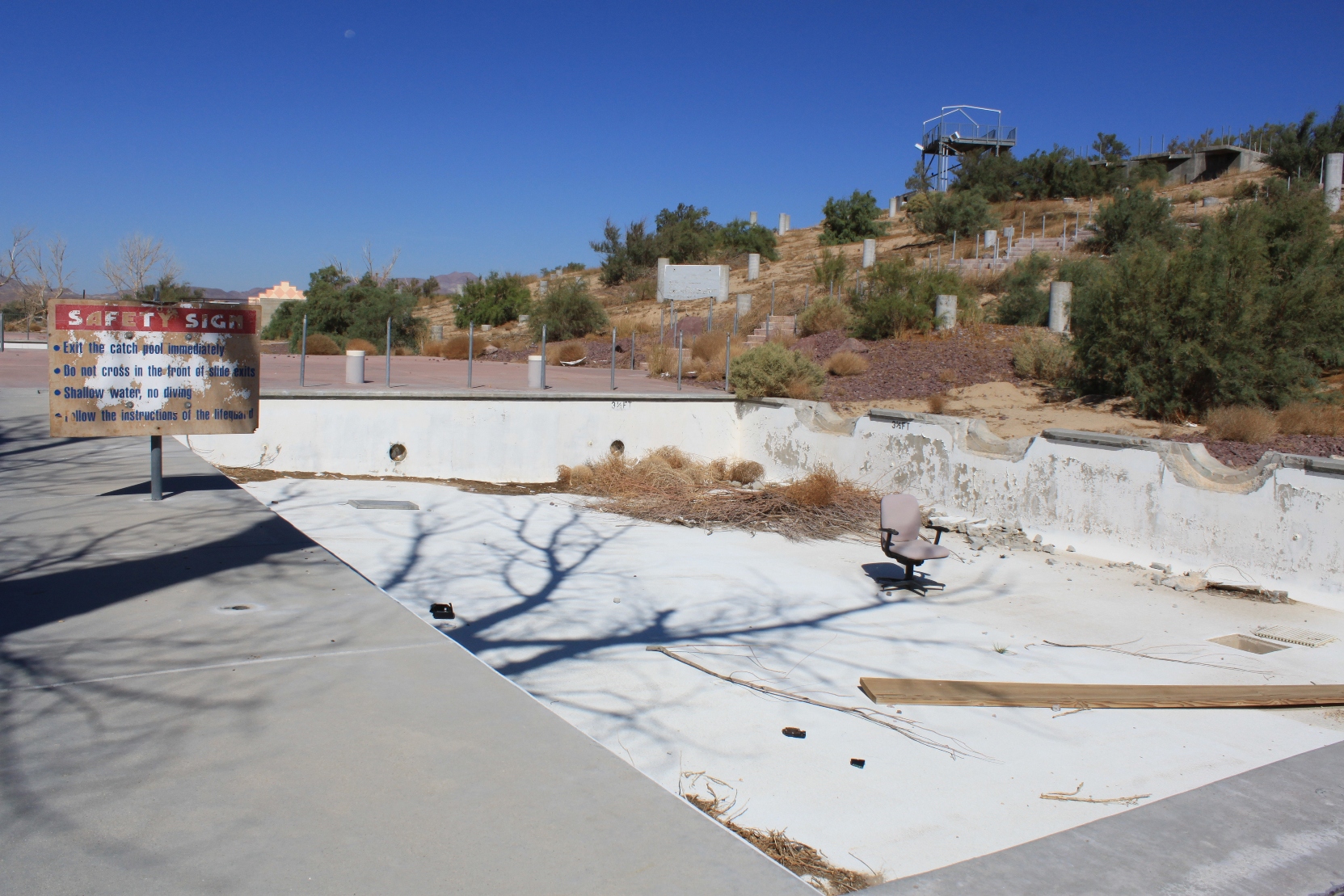 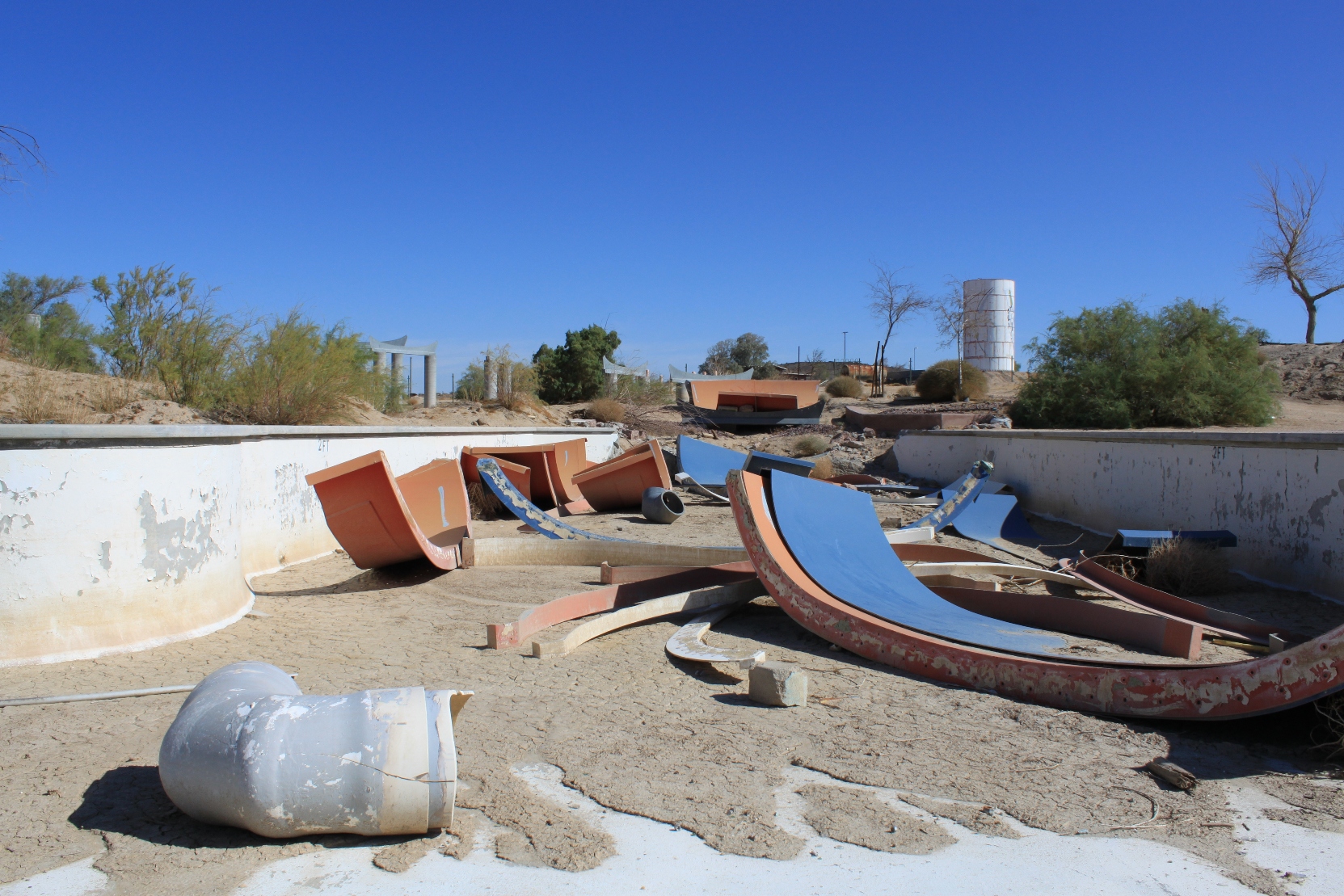 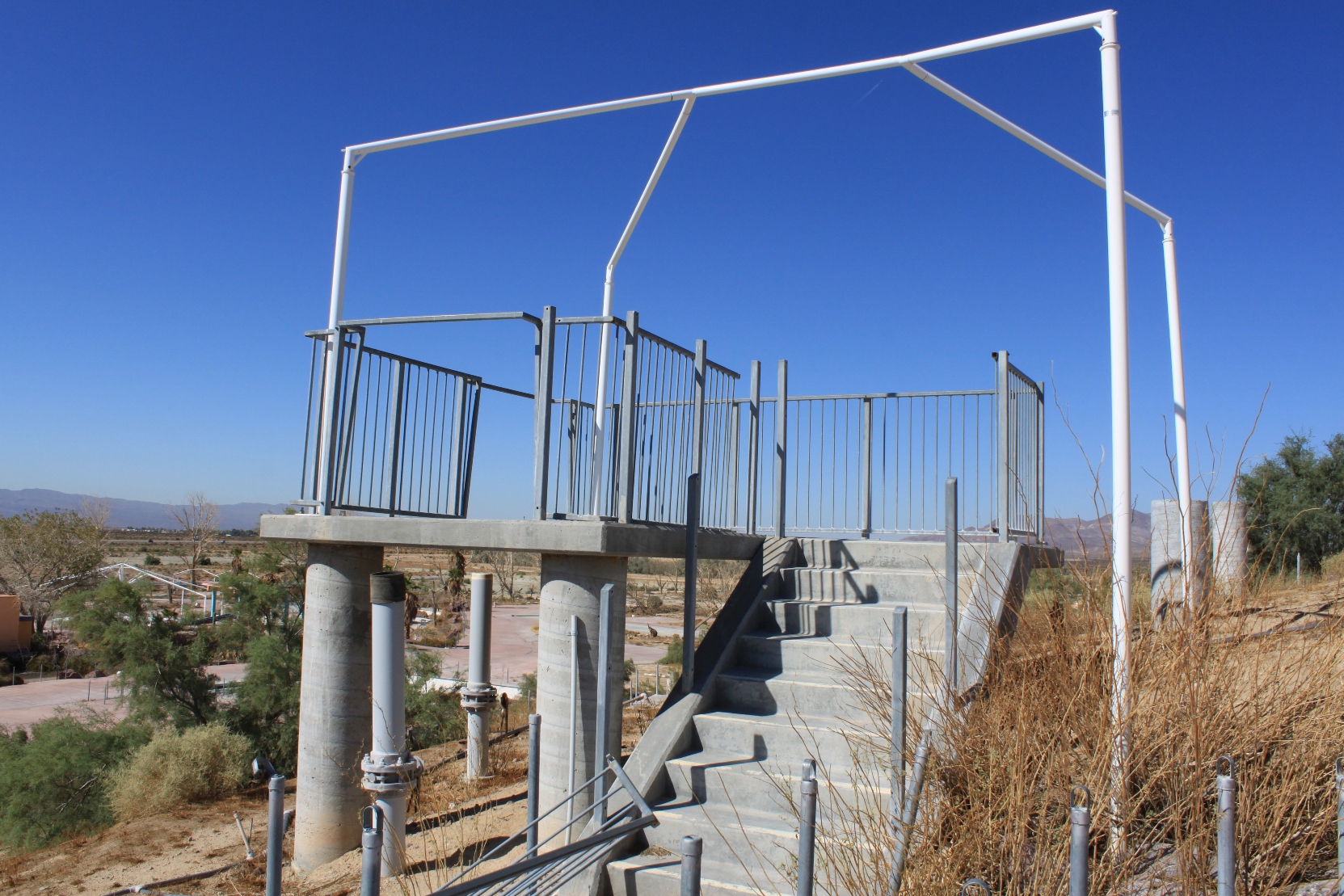 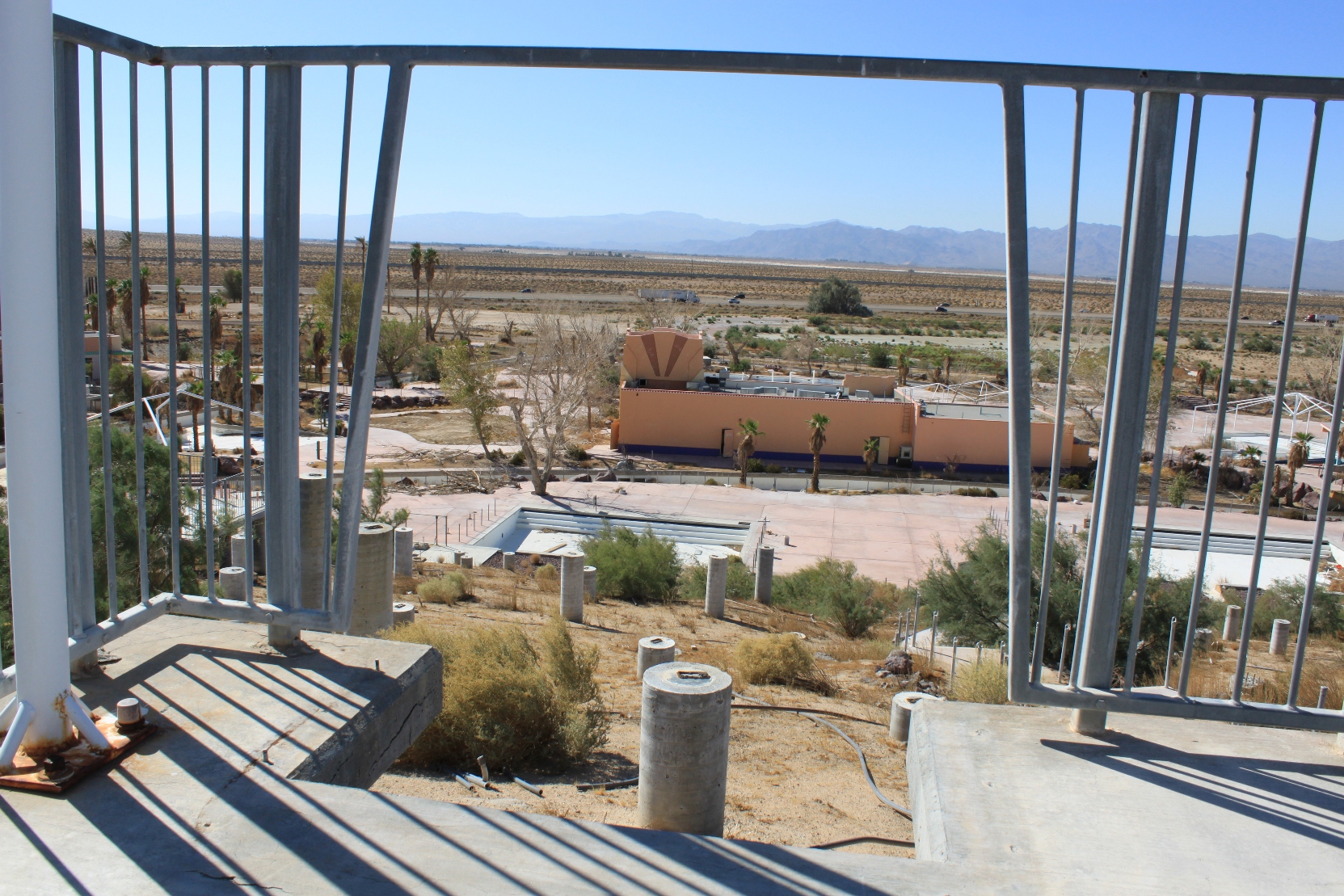 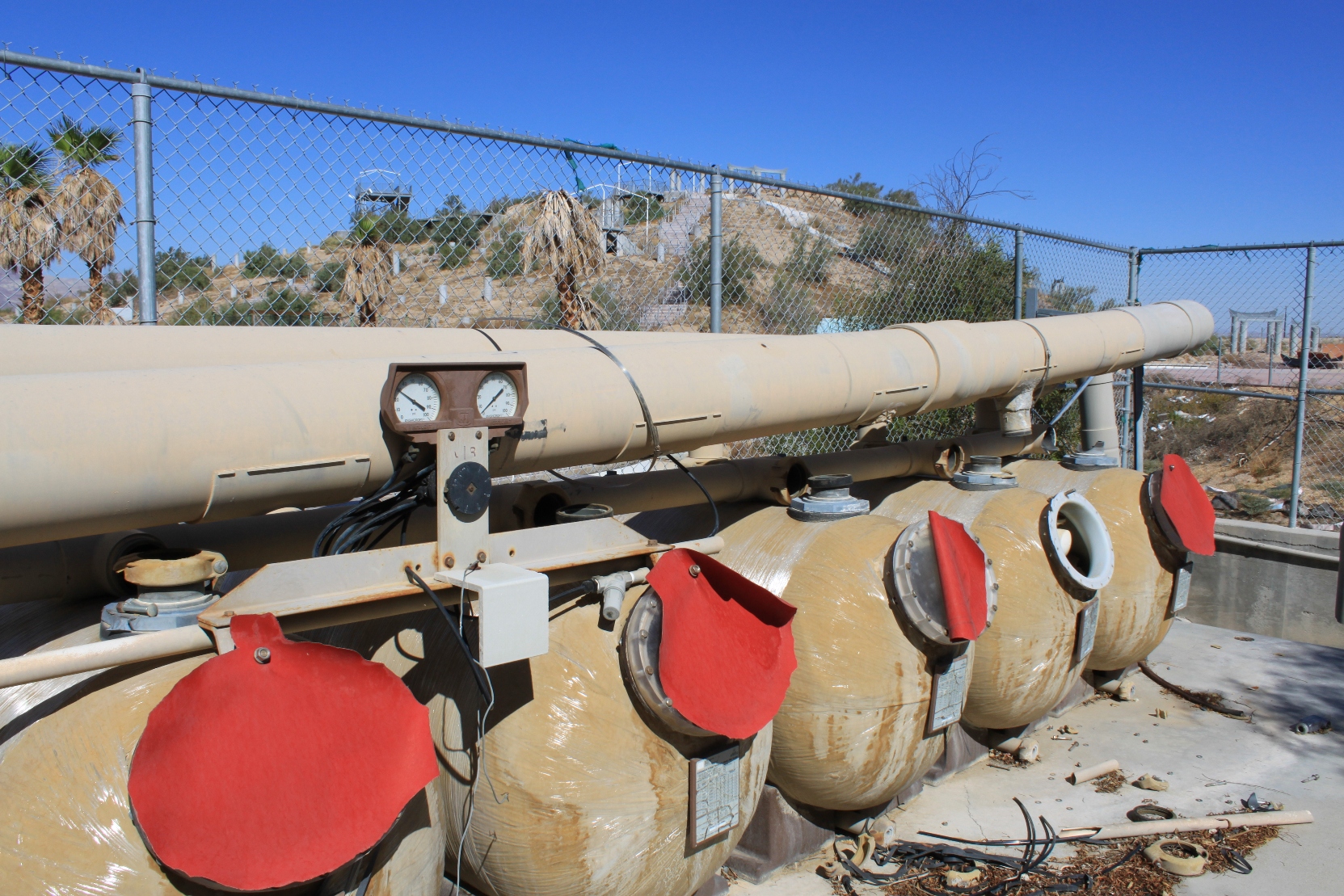 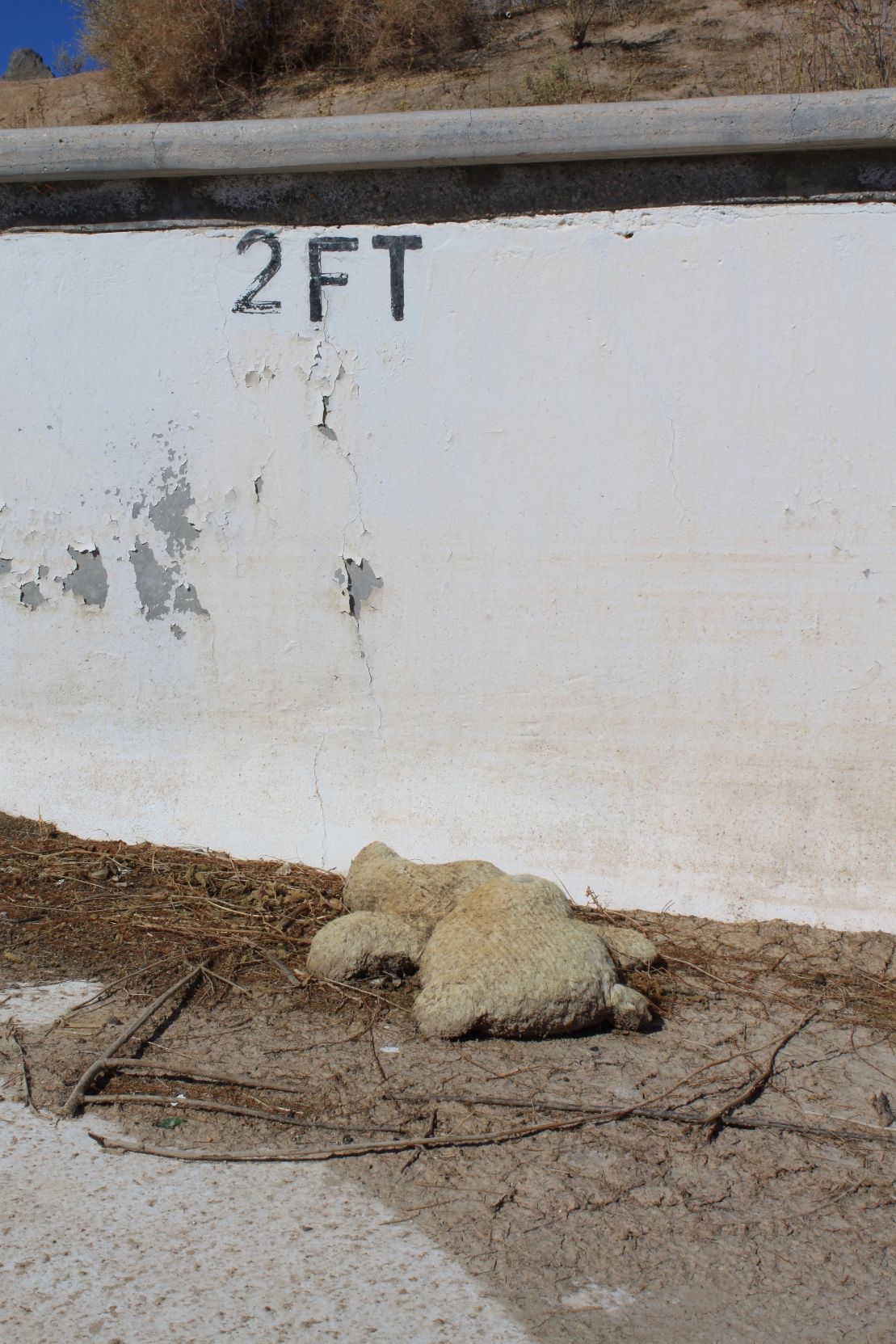 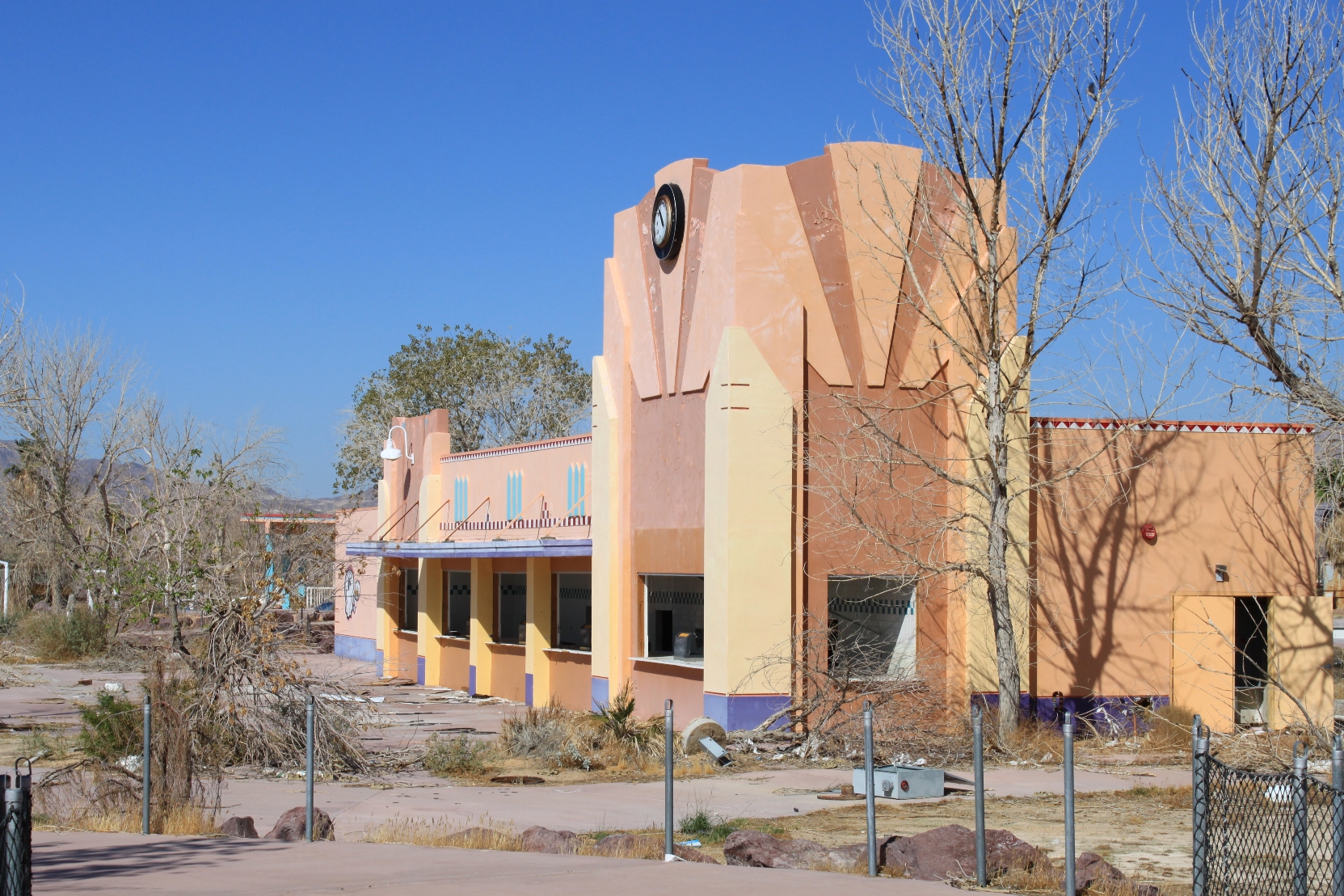 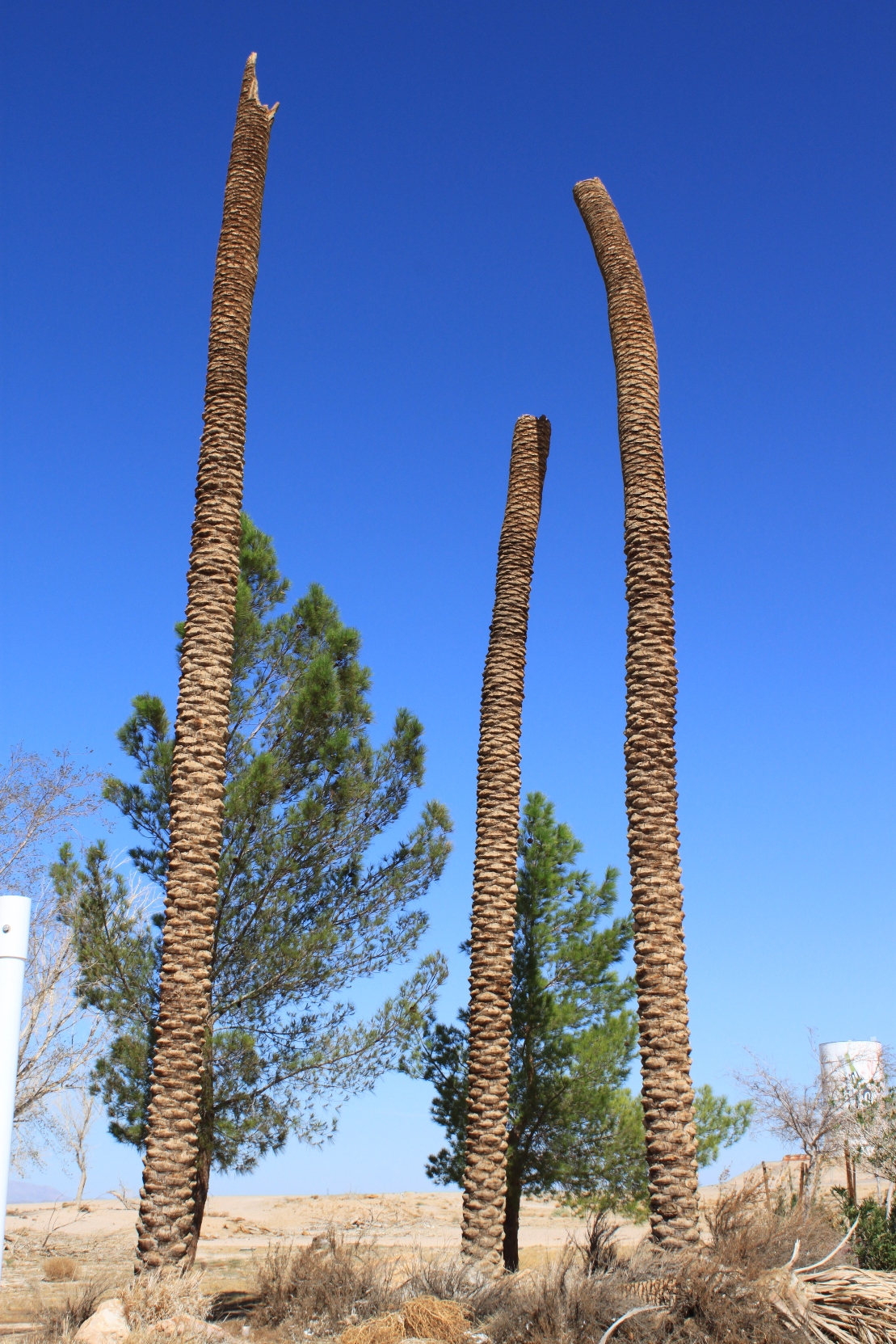 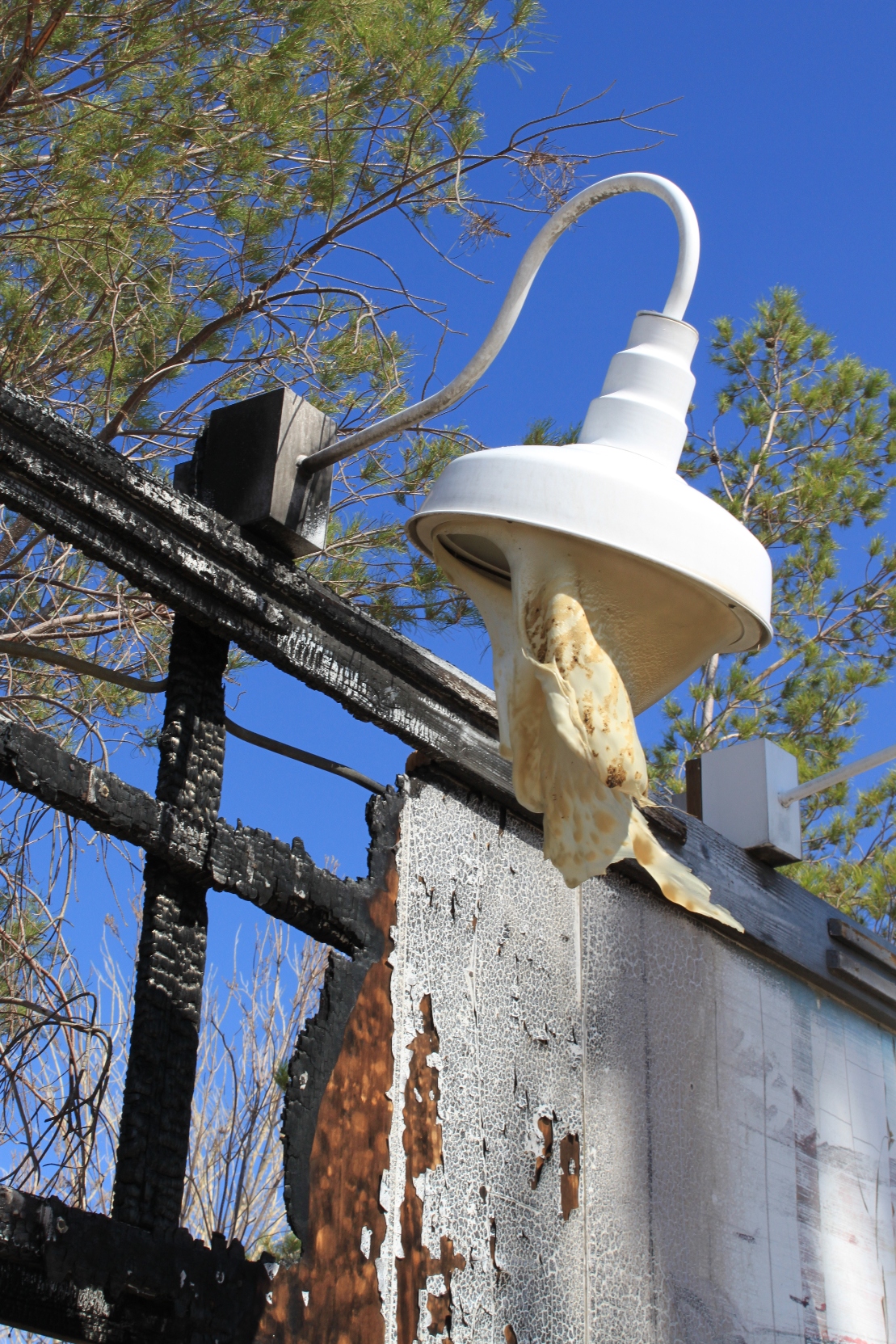 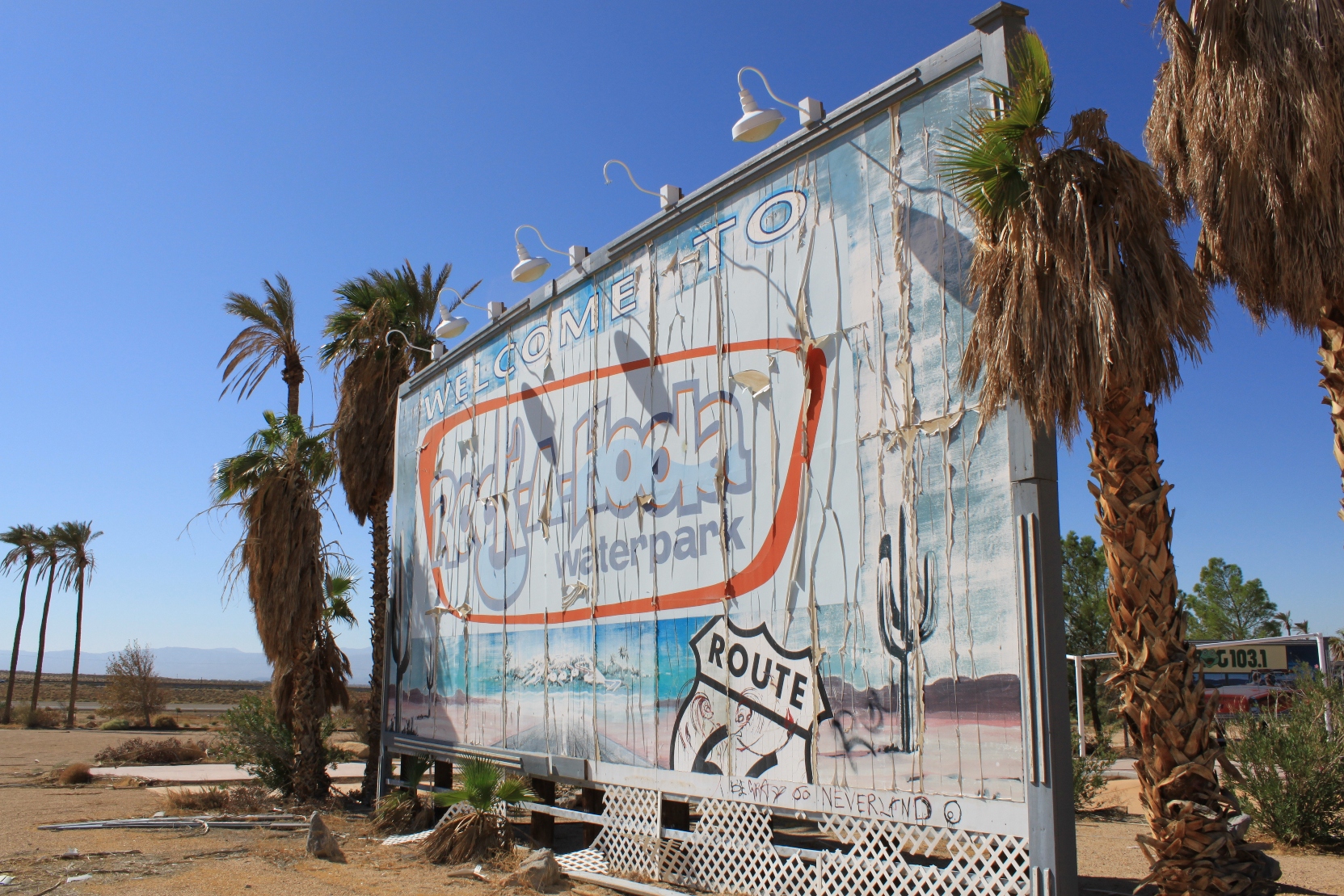 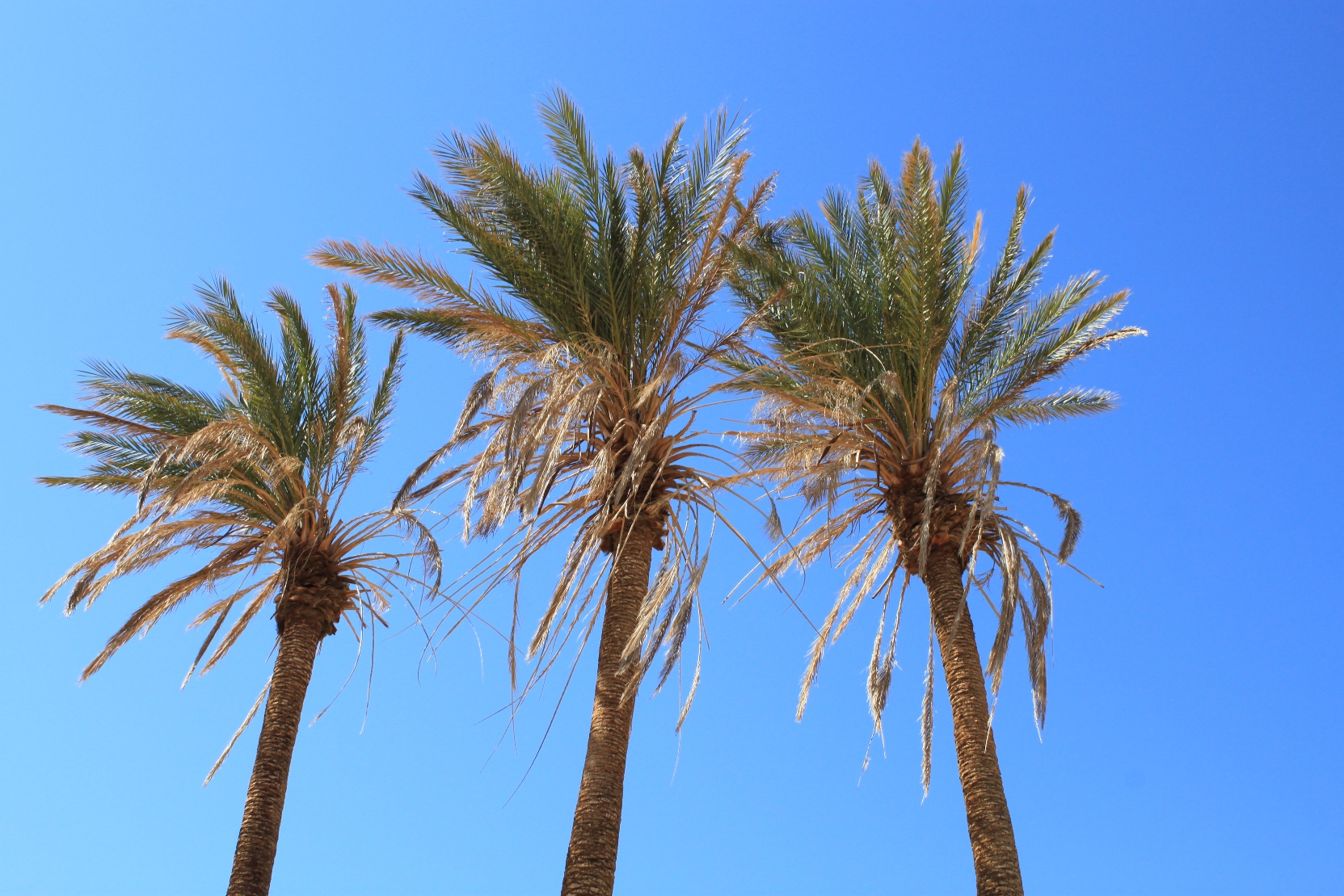 What do the ancient ruins in Greece tell us about those civilizations?  And what do these ruins in the desert tell us about ours?  It’s an interesting shot of California: a dried-up water palace in the middle of the desert in the state that has used water to remake itself into something other than nature intended.

For more information on the waterpark, check out the Wikipedia page.  There is a movie being filmed about the park – you can find out more and watch a TV commercial for the water park by clicking here.

So long to Rock-a-Hoola water park, and now it’s on to Zzyzx to answer the long-standing mystery, what is at Zzyzx Road, and why is it called Zzyzx?   Coming up in the next installment!

UPDATE:  Check out more from the ruins of Rock-A-Hoola waterpark in this post: 2013Return to Rock-a-Hoola … soon to be reopening … ? *Updated*

Here’s a map if you want to go check it out yourself:

8 thoughts on “Barstow road trip, part 1: Dried up oasis in the desert – The ruins of the Rock-a-Hoola Water Park”